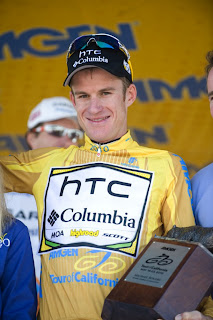 Australian Michael ("Mick") Rogers won this year's Amgen Tour of California in the most exciting contest of the event's 5 year history.  Rogers took the leader's yellow jersey off the back of American Time Trial Champion Dave Zabriski, who rides for Garmin-Slipstream, by grabbing two bonus seconds at the first sprint point of the fifth stage.  The two riders shared matching times at that point so the leader's jersey was awarded to Mick on the basis of their count-back place finishes.  Rogers secured the jersey by grabbing two more bonus seconds by finishing second on the  fourth stage and by besting both Zabriski and three time Tour of California winner Levi Leipheimer (Team Radio Shack) and by edging both of his primary rivals out during the seventh stage individual time trial.

This season's move of the ATofC from February to May provided much more exciting race than in years past by allowing a mountain top stage finish at Big Bear Lake.  The skiing area is covered with snow in February so this was the first time the Tour contestants were able to make the climb.  There were plenty of fireworks as both Zabriski and Leipheimer repeatedly attacked Rogers on the way up to Big Bear Lake and also on the climb of the hill on the last circuit ridden in stage eight.  Rogers proved to be in peak form as he covered each attack.

This is perhaps the best Mick Rogers has ridden since he crashed and broke his collar bone while being the virtual leader of the 2007 Tour de France.  I personally like Rogers now that he is riding clean and would like to see him contend for a podium spot in le Tour this July.

The Giro d' Italia ("Tour of Italy") entered its third week today and really is starting to heat back up.  Before the start this year's Giro looked like it would be a four-way slug fest between reigning World Champion Cadel Evans (Team BMC), Ivan Basso (Team Liquigas), newly-returned-from-doping-exile Alexandre Vinokourov (Astana) and Carlos Sastre (Cervelo Test Team).  Then the the leaders allowed a break away containing Richie Porte of Spain's Caisse d'Epargne to finish 13 minutes ahead of them.  Now all the favorites are chasing the young Spaniard and trying to take title from him.

This year's Giro has had a little bit of everything; rain, wind, crashes, mountains and time trials.  It has not been easy to watch since USA's Versus Channel elected to broadcast the Amgen Tour of California.  I have been able to catch a few hi lites and was able to watch most of today's time trial that finished atop Plan de Corones.  This was an excruciating ride that climbed up more than 1000 meters while moving forward just over 12 kilometers.  The last 5+ km of the race were over a packed gravel road, not asphalt or concrete, and had stretches of incline that reached a 24% gradient.  Add to that the crazed Italian fans jumping all around the riders as they wrestled their way up that narrow trail, and there was more than enough excitement to go around. 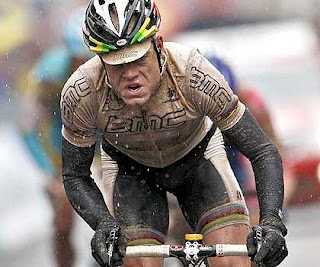 Aussie Cadel Evans has looked like a completely new rider since winning the World Road Race Champion's rainbow jersey and moving to Team BMC this year.  Perhaps that's because the team focuses on Cadel's results and does not have to look after sprinters like Robbie McEwen the way his former team did.  Then again, maybe it really is true that wearing that rainbow jersey gives any rider renewed strength.  He does not seem likely to win the Giro this year, but Cadel has continued to ride bravely and aggressively.  He rode an excellent time trial today and finished with the second best time at the top of the mountain and he has launched repeated attacks on every other mountain stage.

Unfortunately for Evans, Ivan Basso now looks like the most likely candidate to wear the Maglia Roas ("Pink Jersey") at the end of this three week epic.
Posted by Alias at 2:06 PM