Recap of the Paradise Jam II

Thanks to Delta I spent an extra night in St Thomas. I guess there are worse places to be stuck. Anyways...

DJC covered the tournament and the general suckage of our team below. I'm going to add some random thoughts.

- On the plane ride home I spoke to an Iowa media guy and asked him what did the coaches prepare the Hawkeyes for against us. His answer was to take away the inside and let them shoot. They were a bit nervous about that on the heels of the Seton Hall game, but obviously it worked out well. They primarily played a hybrid 2-3 zone, double-teaming Green and only worried about Davis from the outside. It was explained to me it was more of a 1-2-2 look with more collapsing inside. We played their game...

- I suspect EVERY team we play will implement this the best they can. We'll have a game or two like Seton Hall, but if we don't improve we're not much better than the Barn.

- Iowa isn't supposed to be very good. They lost to the LBC (Long Beach) on Monday... and thanks to Delta they (and Clemson) were stuck like me in St Thomas Tuesday.

- St Peter's celebrated their win over us like they made the Final Four. I give them all the credit in the world... their kids never quit. IMO ours were going through the motions since Saturday morning.

- I'm not as full of BAMA as DJC is. I skipped the Iowa game and instead drank on the beach. I did go to the St Peter's shocker with 155 of my closest friends.

- At first, I thought Grant canceling the team's snorkeling trip was a good thing due to their play vs Iowa. I'm not so sure I believe that anymore. I saw a team sleepwalking vs St Peter's (which Grant said himself during a TO), a team playing as individuals, very little chatter between them on the court or on the bench, and when I heard Grant said something about practice when they get back I saw their heads collectively sulk. I'm not sure the approach he's taking with them is effective. Hell... I'll say it... I think he's being too much of a hardass... at least from what I saw in St Thomas.

- The kids aren't having fun out there. Looks to me like the last thing any of them want to do is play basketball. That's a HUGE problem as it won't be corrected at the snap of a finger or more practice time.

- DJC and I talked about Grant's questionable use and non-use of timeouts. We both noticed this last year too. To be honest that bothers me.

For hanging with me through this long post, here are some pics I took at the tourney. They're iPhone quality, but you can see how close we are to the action. 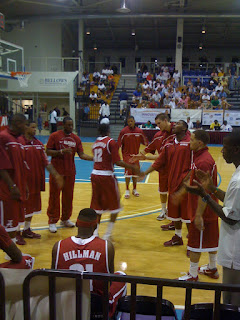 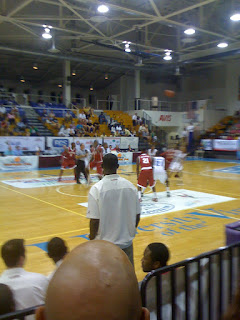 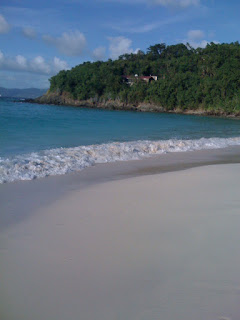 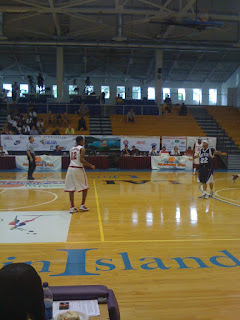 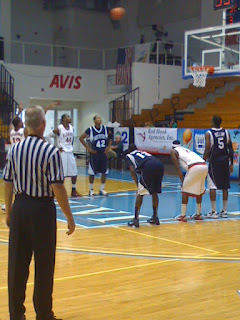 - I'm really concerned about this team. Losing to the 5th, 6th, and 7th place teams is something no one expected. Obviously the season is very young, but IMO we got more than shooting issues.
Posted by bobbyjack at 4:55 PM

The problem is that the coach is being too much of a hardass? I have to completely disagree with you here, Bobby.

The problem with Alabama during the Gottfried years was a noticable lack of discipline. With a team comprised mostly of Gottfried players, it's not really a surprise that Grant is having trouble instilling toughness and discipline in this group.

Look, if they don't want to miss the snorkeling trip or have to put in more practice time, then get it in gear and playw tih some energy. All the coaching staff is asking from these guys is to play with effort. I applaud Grant being a hardass. I hope he keeps it up. Once he gets some winners in this program - kids who want to be the best they can be - that's when we will see the results of his style.

One more thing about the group activities: their primary reason for being there is to play basketball. Everything else is secondary. These kids need to get a grip and grow a pair.

I'm assuming Grant was also a H.A. during preseason practice. Well, it's not working. Sometimes you have to change gears.
Bottom line, something is terribly wrong with this team and something needs to change.

Mitch... like anon said... it's not working. And only 2 of the players that contribute are from the xCMG era (not counting Steele as he's probably done for the year).

And he punished the team for a bad outing vs Iowa... if we played any other team in the tourney than SHU in the 1st round and played like that, we would've won.

Bottomline- Grant's cancellation of the snorkeling trip didn't pay off. And you know what... they're kids... and probably could've used the day off relaxing and MAYBE they beat St Peter's. Looking back at that game, they did seem tired.

The more I think about it the more POed I get. They're supposed amateurs. Had a bad game vs Iowa... and won't play 3 games in 4 days again AND have a hard practice in between them. He flubbed it.