Trouble in Paradise. It's Ebb Tide as Bama brings up the rear

The bad news, we finished dead last in a tournament of 8 teams that did not even feature a single top 25 team. I'm trying to find some good news, but frankly from an Alabama basketball perspective that is a difficult task right now. The best I can come up with is that I'm on a tropical island typing the post while overlooking the beach, and you are not; but that probably doesn't make you feel any better.

I've been reluctant to post because I'm honestly at a loss for words right now. We played hard and competed against Seton Hall. I really felt bad for the guys after that game, as you could see the anguish and disgust on every player's face after that game. We didn't show up for the Iowa game. Coach Grant was more animated and vocal than I have ever seen him during the St. Peter's game. Nevertheless, it was the same situation as the Iowa game, we settled for too many jump shots, played a slower place game that favors St. Peters, and ended up getting beat.

I do not know the answer. Coach Grant's style of play requires a deep bench. We need 10-11 guys who can contribute. Right now, we have 4 players getting significant playing time who at this point in their career should not be seeing the court in a D1 game. The 7 players who are legitimate contributers are better suited to playing the type of game we are trying to run. I don't know what we should do, if you slow it down you go away from the strength of the players in the game, but what we are doing obviously leaves us with huge liabilities. For now, trust Coach Grant and hope that he gets the horses he needs soon.

Other than the horrible basketball, it's been a great trip. The U.S. Virgin Islands are beautiful. We took a ferry to St. John's a couple of days and had a great time. There are some beautiful beaches on St. Thomas, and a fun bar scene at Red Hook. We met Bryan Passink and his wife, and they are great people who love UA even more than we do, which I didn't think was possible. The arena here is small, much like Maui's, and would pass for an average at best high school arena back home. That being said, you can get much closer to the action with a general admission ticket than anywhere back home. Furthermore, the concession stand people were the most quickly efficient, friendly, and reasonably priced of anywhere I have been. Outside of people connected to the program, we did not have much of a following at all. Iowa brought a fair number of folks, as did Seton Hall. Outside of St. Peter's, we probably had the smallest crowd here. I was surprised at how many people Long Beach State brought, and Clemson also had a few. Iowa and Clemson were both on our flight back home, which got cancelled.

On the downside, it's much more humid here than it was in Maui, and parts of the island are somewhat run down. Not surprisingly at all, Delta screwed us and the the flight home got cancelled because they apparently weren't competent enough to adequately maintain the plane. Nevertheless, there are worse places to be stuck an extra night than St. Thomas. Up next, Alabama A&M saturday night at Coleman. Hopefully it being Iron Bowl weekend will draw a decent crowd. Below are a couple of pics, showing a view from the beach on our condo and at the game. 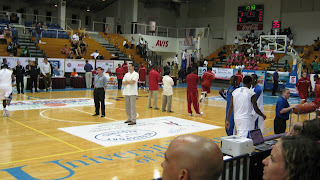 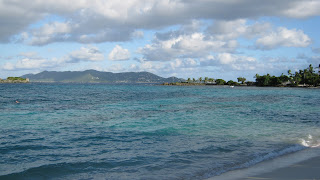 I don't know anything about basketball, but my neighbors from the rent apartment Buenos Aires tried to teach me because they're really big fans of Manu!