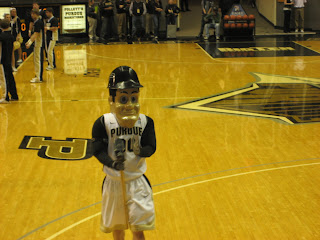 The 19 point loss is the worst of the Coach Grant era so far. Unless we start playing better, there will be many more to come this year. I understand that JaMychal Green has started practicing with the team again, but he did not make the trip. I think we were overly concerned about getting beat in the post and stuck with the zone defense for too long. We were very poor in the zone, and were slow to close out on their shooters. Once they got hot, especially #33, there was no stopping them.

I was disappointed with the team's body language coming into the game. During the starting lineups and pregame, everybody had their heads down and there was very little emotion or communication. I would think they would be fired up, jumping around and excited about playing a top 20 team on the road on national television. Maybe I am reading too much into that, and I know it probably doesn't have anything to do with what happened on the court, but it bothered me that we didn't seem excited to be there.

We hung with them for the first 15 minutes or so until their shots started falling, and then things just got progressively worse. I said before the game to have any chance at all we would need a big shooting day from Davis, Hillman, and Mitchell. They were a combined 0 for 8 from downtown. We did not make a single 3 point shot. This might be the worst shooting team I have ever seen.

Ben Eblen plays hard, and I appreciate all the hard work he puts into the program, but he is simply not an SEC caliber player. We would be better off using Durant as the backup PG. I would even be fine with playing Releford 40 minutes per game like Gottfried did with Ron Steele at this point. Eblen had 0 assists and 4 turnovers. I once read somewhere that the assist/turnover statistic is the most reliable predictor of the outcome in college basketball games. We had 8 assists and 18 turnovers. That is pathetic.

You have to give credit to Purdue. They are a very sound fundamental team. We have athletes, but they have basketball players. Their man to man defense is a thing of beauty. Painter is a very good coach. We tried to press to pick up the pace of the game, but they calmly broke it and got into their halfcourt offense. It was mostly a halfcourt game, and we had no chance in that style of play. Purdue might win the SEC if they played our schedule. Honestly, we didn't belong on the same court with them.

Overall, it was still a good experience. I was sitting behind the basket and right across the stairs from the Purdue band. Most of their fans were extremely knowledgeable and very friendly. A few of their band nerds tried to give me a hard time, but that's to be expected. They weren't overly obnoxious or aggressive. They do seem to have an inferiority complex with Indiana. Several people went out of their way to let us know how much they hate IU, and their students had organized "IU Sucks" chants. Mackey Arena holds over 14,000, and it was nearly packed, with only a couple hundred empty seats at the top behind one of the baskets. We had a total of about 20 fans there. The atmosphere was great, probably the 2nd best I've seen behind Kentucky. The arena is currently undergoing badly needed renovations. Frankly, the place is a dump. It's all bench seats, there is no lobby area to speak of, and the concourses are bland and ugly. My gf takes more pics than a foreign tourists, so scroll down to see some from the game, around campus, and me ice skating later that night (this was before I busted my ass).

No midweek game this week as the players will be taking their finals. Study hard and good luck, boys, we can't afford to lose any more of you. Up next, we go to Providence to play the Friars in the Dunkin Donuts Center next Saturday. Tipoff is 2pm EST, 1 Central, and will be televised on ESPNU. I will be there, and I understand the Boston and New York alumni chapters are organizing a trip, so hopefully we will have a decent following. 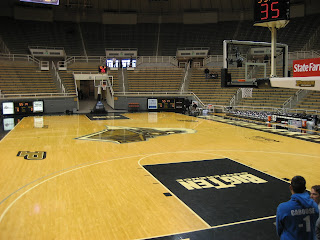 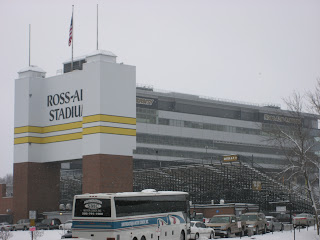 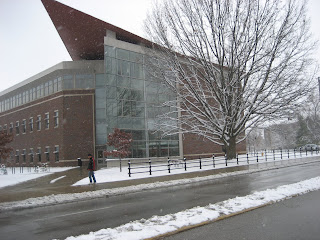 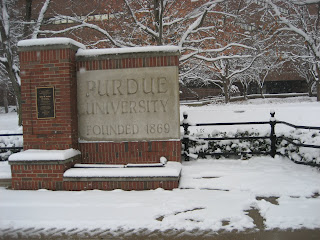 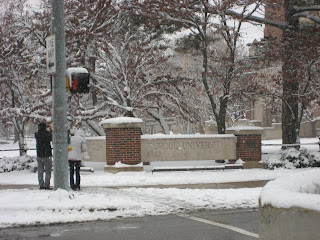 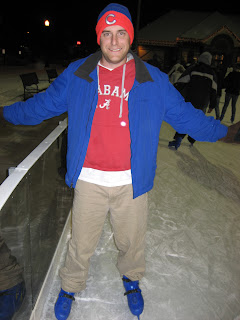 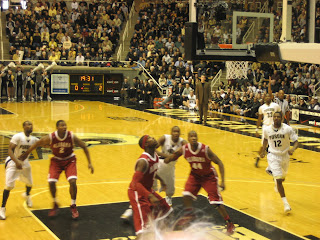 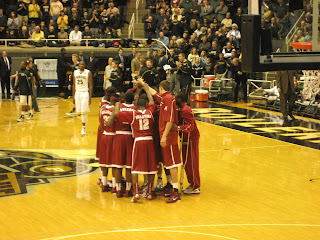 Maybe one day we'll have 1/2 the atmosphere most of the Big 10 schools have for hoops.

Obviously you didn't get the behind the bench Paradise Jam seats. Heh... still pretty sweet.

"Ben Eblen plays hard, and I appreciate all the hard work he puts into the program, but he is simply not an SEC caliber player."

not an sec caliber player???

i must say i'm extremely disturbed with the dark tone this blog has taken lately.

let's all remember how great grant would be doing were he at florida right now.

Thanks for the writeups. I enjoy your opinions on the team and the game. Intersting statement about Purdue has basketball players and we have athletes.

DJC, you are the best Bama Basketball fan I know. I've known plenty of people who schedule their lives around football games, but you attend more of our away games than any other fan I've ever known. I am honored to be your friend. Maybe one day I can make a trip or two with you.