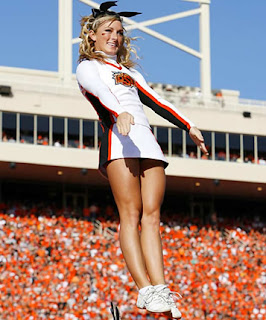 The Cowboys come into the game 9-1, but outside of VA Tech (their only loss), they really haven't played much of anyone. Cupcake city for the most part.

Marshall Moses and Keiton Page lead their offense at 18.6 and 14.7 PPG. Moses also co-leads the team in rebounds (with Darrell Williams). OSU really doesn't have a 3 point threat, despite jacking up roughly 13 of them a game. 9 players average 10 minutes per game.

Writeup of the game from OSU

Keys to the game:
- limit Moses inside
- need to hit some 3s (Davis, Hillman, Releford)
- Green has to stay out of foul trouble
- Releford with penetration (as I don't think they have a player that can guard him).

Prediction- I normally don't do game comparisons, but if we couldn't win at Providence which was probably the most winnable road game we had out of conference I can't see us pulling the upset in Oklahoma City (essentially a road game here). I believe we stick around and don't have the late meltdown like we did against the Friars, but nonetheless we come up short... again. Cowboys by 9 late.

Not sure if it will play a part in this game, but two Oklahoma State basketball players (their names have been withheld) are suspects in a sexual assault investigation stemming from an incident that allegedly took place last Saturday.

Patting myself on the back... I've missed the last 3 game predictions by a total of 3 points. I need to take my act to Vegas, Ba-bee!