Alabama moves into sole possession of first place in the SEC with the win. We started off sluggish, especially on offense. At times in the first half we appeared to get lazy on the offensive end. LSU's man to man defense gave us some trouble, mainly because we were doing way too much standing around. Senario and Charvez were both guilty of dribbling around for too long and forcing bad shots at times, but a part of that was because nobody was helping. Fortunately, we continued to play lock down defense and we picked it up on the offensive end in the second half.

Much like auburn, LSU does not have any ball handlers, so we used the full court trap a lot more. The Tigers looked hopeless against it in the second half. Andrew Steele gets my MVP award for the game. He came off the bench and made a 3 pointer, scored 7 points, got some big rebounds, and caused some crucial LSU turnovers at a key point in the game in the 2nd half. The run that he sparked pretty much put the game away.

Speaking of guards coming off the bench, Ben Eblen is proving all the bad things I said about him earlier in the season wrong. Once again he gave us some solid minutes, including an awesome blocked shot from behind on an LSU break away that really got the crowd into the game for the first time.

Another player who is proving my past criticism of him wrong is JaMychal Green. I've been on him for being "soft" the last couple of years, but there is nothing soft about the way he has played in this SEC season. It was another physical game in the post where he continued attacking the basket on offense, held his own on defense, and got the better of his opponent.

#5 for LSU was playing dirty all day. He threw several elbows in the post, and one time even kneed JaMychal in the back of the leg running back up the court after he helped him up. Despite Ted Valentine's usual prima donna antics, I thought they called a decent game for the first 25 minutes or so, but they more than made up for it down the stretch. Allowing #5's antics to continue led to the first double technical foul situation. I lost a lot of respect for LSU coach Trent Johnson for allowing him to remain in the game after that altercation. Also, since it was obvious #5 was trying to bait JaMychal, Coach Grant should have pulled Green out of the game at that point as well, especially with a 20 point lead. We are very fortunate JaMychal's second technical foul was waived off after about a 15 minute discussion and multiple trips to the replay monitor. If they didn't reverse that call, he would probably be suspended for the $tate game.

One can make the argument that our current first place standing is a result of smoke and mirrors and an easy schedule, and there is some merit to that assertion. We can't shoot, we were only 2 of 12 from the 3 point line, and we have little depth. Despite that, I like this team because we have an identity. If the perimeter shots aren't falling, we will attack the basket. We made 18 of 22 from the charity stripe yesterday, that needs to continue. More importantly, we are one of the best defensive teams in the country. A team that plays defense like Alabama will have a chance to beat some more talented teams, and will usually take care of business against inferior opponents. That is what we have done so far this year, which is more than can be said for any other SEC team to this point.

It was great to see a sell out crowd! The atmosphere was not quite as hyped as it was for Kentucky, but it got loud when we made our runs and I think had LSU's young team a little rattled. Every home game for the rest of the year needs to be the same way. Not only for the current team, but for recruiting purposes as well. This is our chance to show that we are a lot more than just a "football school." My gf finally remembered to bring her camera, so I will post some of the pics below. They should give you an idea of my perspective for home games. Major kudos to whoever that is with the corndog "Geaux Home" sign.

Up next, $tansbury and $tate come to Tuscaloosa for a 7pm tipoff Wednesday night. They were the preseason picks to win the SEC West, and are coming off a big win over Florida. We need a packed, loud house, as this may be the most important game of the season so far. They certainly have the talent to beat us, and we simply CAN NOT let that happen. 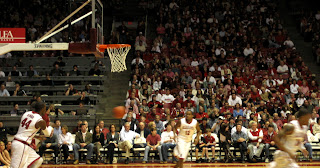 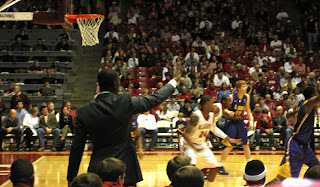 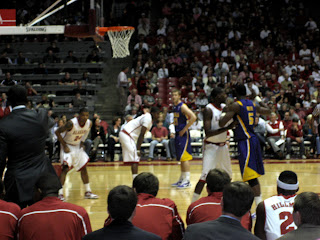 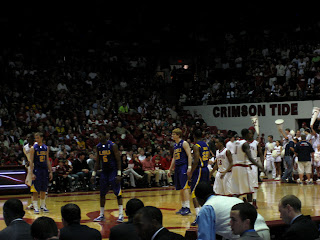 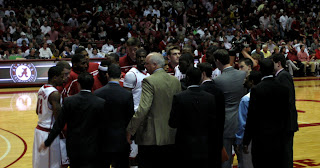 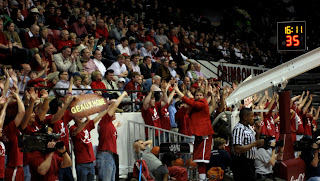 Here's a question for people who are more knowledgeable about bball than me. Below are the current stats for FT shooting in the SEC:


How on earth has Bama, which relies on an inside game and has often had the lead near the end of the game, taken so few free throws? The size of the difference in our FT attempts and almost every other SEC teams', particularly given our style of play, is astounding.

That is quite a disparity that I was not aware of. Outside of the obvious explanation of Mike Stuart and Ted Valentine calling a lot of our games, I think it comes mostly from the non confrence games. I would be very interested to see that stat limiting it SEC play.

In the non-conference schedule, we tried a number of different lineups and did not attack the basket as consistently as we have been recently. Also, in many of those games we had a big lead late, so the opposition did not attempt to foul to extend the game. Also, when you have a big lead, often times the officials will let the losing team get away with a little more, and I think that was the case in some of those non-conference blowout games we had at home.

Thanks for posting, it's interesting to consider the possibilities. I also didn't realize we were 3rd in the SEC in FT%, as it seems that we have sucked at times. We've had some good games at the line recently, and it looks like there are some really bad FT shooting teams in the SEC.

DJC, when I first saw these stats this morning I thought the same, it was the non-conf games. Remember we were already 50 in the hole after playing Seton Hall, and it could have been more. So I found the only SEC games stats which are below. We're 7th in only SEC games so it was definitely bad before conf play started. Even more, the barn and gators have 11 and 15 more attempts than us but have played an extra game so considering we'd likely shoot more than 15 on average we're more like 5th.

Same anon as first comment - that last comment makes me feel a little better about SEC refs, at least.