There is no such thing as an ugly win. It takes a good team to go on the road and get a win despite not playing great, and that is exactly what Alabama did. auburn is a very bad basketball team, but they were playing in front of their only sell out crowd of the year and were jacked up about the possibility of pulling the upset. As bad as they are, they did somehow manage to beat Florida State at home and held our co-leaders of the SEC to only 45 points.

We ran the full court press a little more in this game than we have the other SEC games. I suspect this was an attempt to pick up the tempo of the game and take advantage of auburn's poor ball handlers. While we did have some degree of success, auburn was able to control the tempo for the most part.

In some ways auburn is like a much less talented version of Alabama. Neither team can shoot, but both play very intense defense. We had a very difficult time scoring against their 2-3 zone. We got good looks against it when we attacked it. Releford and Hillman were able to penetrate on the dribble drive, and for the most part we had good spacing and ball movement. Unfortunately, we couldn't make open jump shots and couldn't finish around the goal. We only shot 4 of 20 from 3 point range, and wasted several possessions by passing the ball around the perimeter and jacking up a bad shot.

Releford did not have a great game, and had to come out with foul trouble, but I thought he was solid when he was in the game. He made a huge 3, but more importantly he took care of the basketball for the most part and showed good composure when auburn tried to make a run. Ben Eblen gave us some great minutes, taking care of the ball and playing good defense. He seems to be learning to play within himself, and while he will probably not ever give us much offensively, I am getting to the point where I no longer cringe when he enters the game. With both of our PGs in foul trouble, Charles Hankerson even got into the game and ran the point for a couple of possessions late in the first half.

Chris Hines continues to do all the little things to give us a chance to win. Tony Mitchell may be the most underrated player in the SEC. He does it all, and while he took some ill advised 3's, he also made a huge one to give us the lead going into halftime to go along with usual 2 or 3 spectacular dunks per game. JaMychal went strong to the basket and knocked down his free throws. Thankfully, he seems to have finally abandoned his fade away game that never worked.

A key to the win is we made our free throws for a change. It was a close game that we had to grind out, and we were able to pull away late and put the game away at the free throw line.

I actually thought the officiating was pretty decent in the first half, but Releford could not get a call in the 2nd half. On one fast break, he was hacked, busted his lip and landed hard, there was no foul, and then Coach Grant was called for a technical on top of that. Meanwhile many of the auburn fans started celebrating Releford's injury, pointing and taunting him, and some were implying that he "wasn't hurt" despite the blood coming out of his mouth. Justice was served as auburn missed both free throws. Despite the foul disparity being greatly in auburn's favor, the fat bitch in front of me actually asked at one point, "do yall have the zebras on the payroll too?" Really? You just paid a qb $200,000 to win a National Championship in football and you are going to bring out the 'refs on the payroll comment'?

Anyway, I will give credit where it's due, the new arena is very nice. I would say it's one of the top 3 in the SEC along with Arkansas and South Carolina, although it is very small. See the pictures posted below. I wish we had a similiar set up, although we would need something about twice as big. It was a sell out crowd, but it wasn't packed, there were several hundred empty seats scattered throughout. There were more Alabama fans there than I expected. Probably close 200 or so scattered around. The auburn fans were by far the least knowledgeable basketball fans I've ever encountered. Keep in mind this includes trips to places like Mercer, Alabama State, and UNC-Charlotte. I didn't hear a single auburn fan refer to any of their players by name the whole game. I honestly don't think they even know their own player's names. One idiot behind me went on for 5 minutes about how "the refs screwed us out of foul shots, bammer has 8 fouls, we should be shootin!" The foul he thought should result in free throws was a charge. Seriously, even most girls and small children know that you never shoot free throws on an offensive foul, but this was a grown man. When we had a 58-49 lead late in the game and reality was setting in for the barners, the fat bitch in front of me screamed out "28 to 27 wooo!" I responded by yelling equally as loud, "58 to 49!" Her response of "who cares" is a big part of the reason why they are the laughing stock of SEC basketball right now.

Up next, we get a week to rest before LSU comes to Coleman Coliseum for a 7pm tipoff on Saturday, January 29. I expect a packed house. This team is 4-1 and in first place in the SEC, they deserve your support. If you can make it but choose not to go, you are essentially saying "who cares." We are better than auburn fans, lets give these guys the home court advantage they have earned. Roll Tide! 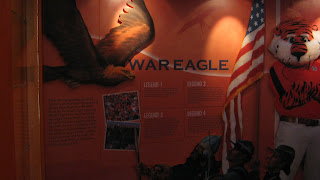 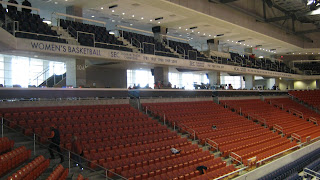 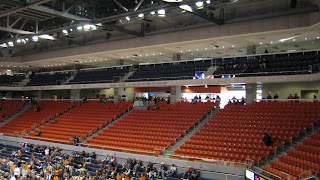 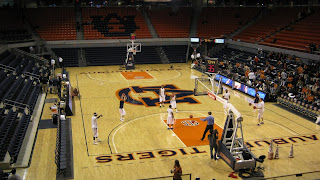 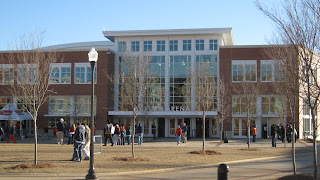 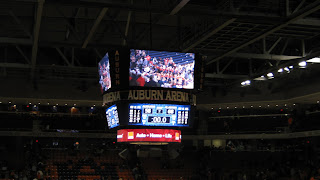 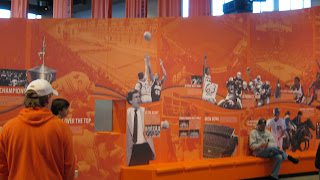 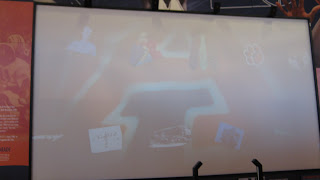 I got in for the last 10 minutes of the game.
A very nice AU lady gave us tickets on the 7th row right behind the BAMA bench after we snuck in a back door! (Seriously.)
Game ended sweet for the good guys.
MUCH impressed with the building!
LOVE the atmosphere... makes 9-grand feel (and sound) like 20.
How do I post pics?

Anon:
you can either upload them to photobucket and then copy/paste the urls or email them to me and I can post them. email addy is on the left side of this webpage.

DJC, api has even fewer hoops fans than we do. There's little wonder the people sitting around you didn't know anything about the game. They've probably never seen a basketball game before.

We NEVER, and I do mean NEVER, had to put up a curtain to disguise our miserable fan base. The only time they sell out even their 9,000 seat arena is when they get that tropy at half time from us. I hope Coach Barbee does not cheat, but if he does not then I don't know how they can win. The only two times api has had a really successful program during my lifetime was just before they got put on probation - on two separate occasions.

I'll give api credit though. They played tough defense with an under-talented team. I think Barbee is alot like Jeff Lebo: if he can ever get some talent on that squad they will be good because what he does have is well coached.

Too bad that when the "fans" finally show up to see that team play they won't have any idea what they are watching.