I believe there is no such thing as an ugly win, but after last night I might have to rethink that philosophy. I will try not to rehash all the horrible offensive stats here, bobbyjack covered that in the post below. I was afraid we would have an off night at some point, and hopefully we got that out of our system now, but still got the win.

The team came out looking very flat. There was no emotion, intensity, or sense of urgency early on. I think we overlooked auburn to some degree, and they just wanted it more. A win for auburn would have made their season, and I'm not sure our guys appreciated that. 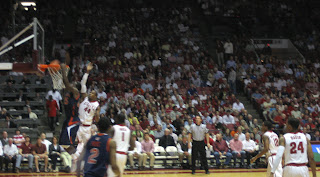 This should not happen.


I was still not overly concerned when auburn jumped out to the early lead because they were fouling at a ridiculous rate. I think they had 5 fouls in the first 3 minutes of the game. It almost seemed like their gameplan was to play zone, make us shoot, but foul if neccesary to keep us from getting to the basket. Throw in a couple of stupid fouls they committed early in the backcourt as well, and they were lucky to have enough players to finish the game. Those early fouls came back to bite them. If they had any big men left at the end of the game, the outcome may have been different. Four tigers fouled out of the game, and it should have been 5, as Langford picked up his 5th foul when Andrew Steele got injured driving the baseline, but the official gave the foul to number 5 instead of 0. 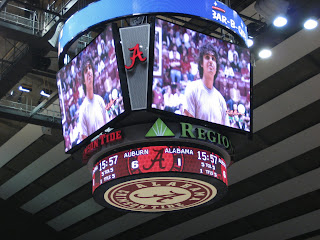 auburn out to an early lead, but already with 5 fouls.

To give you an idea of how ugly this game was, the teams could not even lineup and rebound missed free throws without multiple incidents. We were called for 2 lane violations, both of which were good calls. The eagles followed up one of those by air-balling the free throw. The official then held the ball for a good 30 seconds while Barbee got his substitutes into the game, who were not even making an effort to report to the scorer's table. #45 for auburn was early in the lane at least twice on free throws and it wasn't called. 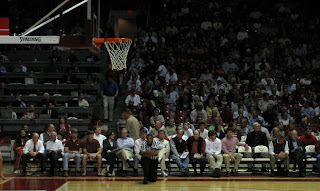 Ted Valentine on his knees, trying to blow the game.

The plainsmen did a great job in their zone defense. We tried to space the floor and work the ball into the post, but they were effective in denying the entry passing lanes and doubling down on JaMychal. I thought we were somewhat lazy in our offensive attack. Tony Mitchell was not very active in trying to get to the rim for the most part. Releford completely abandoned the dribble drive game. Add in some bad passes and unforced turnovers, and you have a complete disaster on offense. Thankfully, auburn kept fouling us, and a subpar 67.5% from the free throw line was just enough to get the job done.

The press was effective against auburn, forcing numerous turnovers in the backcourt. Unfortunately, we were rarely able to score off of them.

Andrew Steele needs to be more assertive on offense. There were a couple of designed plays that actually worked to put him a good position in the corner to either take an open jump shot, pump fake and get the defender in the air, or drive the baseline, but instead he just passed the ball back to the point. Charvez Davis was way off. At times, Hankerson and Steele looked like the only ones who wanted to be there. I thought Hankerson gave us some solid minutes, at least until he drove right at an auburn center and got rejected. He seemed unsure of himself after that.
JaMychal Green did a good job in the 2nd half of at least getting to the line and making most of his free throws.

I was very concerned when we were still down 12 in the 2nd half. I did not see the same swagger and intensity that we had when trailing Arkansas in the 2nd half. We still looked very timid on offense, and the basket seemed to have a lid on it. This team found a way to win though, playing lock down defense. During the comeback, there was a series of 4 possessions in a row where auburn did not even get a shot off that hit the rim. 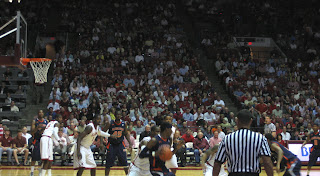 Good defense got us back in the game.

Barbee had the better gameplan, but Coach Grant outcoached him in the final minutes. He managed his timeouts so that we still had one if needed at the end of the game, and that allowed us to draw up the winning play with 7 seconds left. On the previous play, we put an emphasis on guarding the perimeter, which allowed auburn to tie the game on a 2 point play. I liked the defensive call, and was surprised that auburn took the 2 in that situation as they would have only had about 6 players left to play the overtime period. On the last play, Tony Mitchell used a screen coming off the weave to drive the lane. I thought he was fouled, but was glad it wasn't called, as JaMychal Green tipped it in with .3 seconds left. While we were all celebrating and chest bumping on the court, auburn heaved a shot that nearly went in. By rule, it would not have counted, since .3 seconds is not enough time for a catch and shoot, it would have to be a tip in during that situation. Still, I would like to see a little more awareness regarding the fact that auburn had the ball and there was still time on the clock. 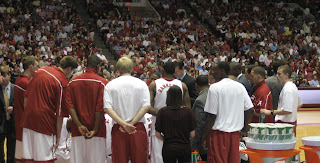 Coach Grant did a good job of managing his timeouts.

It was a sellout crowd but there were a few empty seats in the corner. The student turnout was great. auburn kept the crowd out of it until late in the 2nd half, but the tigers seemed to get rattled under the pressure when it finally started to get loud. Former players Bobby Lee Hurt and Jason Reese were in attendance. Bobby Lee was sporting some bling and a pimp suit. Anyway, survive and advance, that's what it is all about. 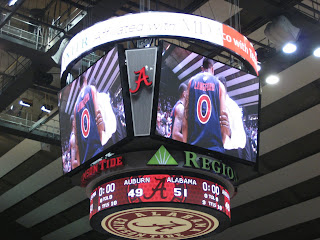 Final Score, all that matters.

Up next, we travel to Oxford, MS to take on the Ole Miss rebels. It's a 3pm tipoff Saturday and will be televised on the SEC network. We will have to play a lot better than we did last night to have a chance, but I have no doubt that we will.
Posted by DJC at 10:49 AM

Just glad we got the W. Hopefully it'll be a learning experience for the team. But you've got to believe that other teams will use this game tape as the blueprint for shutting us down completely.

It would not have beat the buzzer. By rule, you cannot catch and shoot with less than .4 seconds remaining on the clock. Of course, the refs should have blown the whistle and waived it off, but they didn't. I'm assuming they would get it right on review, but with Ted Valentine and Doug Shows, who knows?

You know why that rule was created? Bulls/Knicks game in the early 90s when Trent Tucker hit a 3 with .1 on the clock to beat the Bulls. Michael Jordan was livid.

It's scary that our 3 point shooting is ALWAYS bad. What hurts our game is that they don't even contest our shots half of the time.

I miss the days when we had guys who could hit from the outside, especially Ronald Steele. That guy could have been a legend had he stayed healthy. Great first step and could break anyone's ankles. He could also hit 3's.

As I've said before, when Grant gets some shooters, we're going to be so good.

I really hope Green doesn't go pro. He seems like the type of headcase that would leave early and then regret it.

Bobbyjack, I remember that. Considering you are from NY, it's probably best if I keep my thoughts on those 90's Knicks teams to myself.

Nick, I'm not too worried about teams using the auburn blueprint against us. Every team we face is going to play zone and pack it in most of the game anyway. You are right, if we had just one shooter it would make a world of difference. We need somebody to step up and at least force our opponents to somewhat guard the perimeter from time to time.