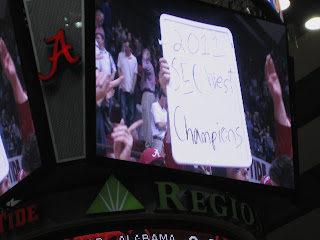 Alabama clinched the 2011 SEC Western Division Crown with the 13 point win over Arkansas. I know we generally don't hang banners or otherwise celebrate division championships around here, and I know the West sucks, but considering it's only our 3rd SEC West title in 20 years I think this team deserves some recognition for the accomplishment. Obviously, there is still a lot of work left to be done.

I was concerned about the quick turnaround again, having to play Saturday after a road game on Thursday. There were some signs of fatigue at times. The team looked very fired up in the pregame, and jumped out to a 5-0 lead. Unfortunately, after that burst of emotion wore off, we were flat at times and Arkansas came back to take the lead. 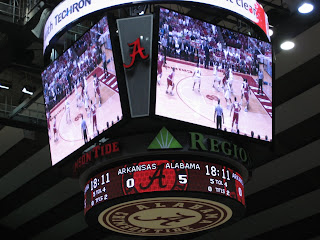 Arkansas is a team that gives us some matchup problems. Rotnei Clark's ability to shoot basically forces us to stay in a man to man. That puts a lot of pressure on our post guys, but they did a great job. It also prevents us from pressing as much as we would like, because if that guy gets open, it's 3 points on the board. We lost him a couple of times early and paid for it, but for the most part Davis played great defense on him, as did Senario and Andrew when they were in the game. He made a couple of shots that could not possibly have been better defended.

Clark at the line shooting 3.

There were a series of close calls in the first half that seemed to go against us. There were a couple of block/charge situations, and a block/goaltend within a short span during which Arkansas was able to build a lead. Honestly, I can't say with 100% certainty that any of them was the wrong call, but it was frustrating because there were so many close calls going against us. Coach Grant called a timeout to refocus the team, and we were able to claw back and tie the game going into the half.

Anthony Jordan was hearing it from the crowd after a number of close calls went to the Hogs. 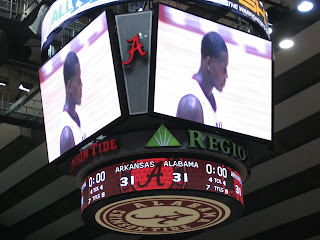 Tied at the half. 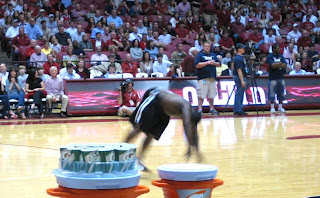 The Beale Street Flippers entertain at halftime. This guy was built like a bowling ball, but he could do backflips the length of the court.

JaMychal Green silently had another very solid game. He took some bad shots early but settled in and went back to his bread and butter of being aggressive and attacking the basket. He was only one rebound short of a double-double.

Arkansas deserves some credit for hanging in there. It seemed like everytime we got some momentum they would answer, and vice versa. For the first 30+ minutes, both teams answered each other's runs. I was expecting the game to go down to the wire, and the fatigue factor was a major concern for me. It turns out those concerns were unfounded. After falling behind 5 with 12 minutes to go, the team responded with a sense of urgency at gut check time. Tony Mitchell and Trevor Releford simply would not allow us to lose. When Releford decides he wants to get to the basket, he is unstoppable. With Charvez Davis having an off night shooting the ball, Releford stepped up and knocked some huge shots down the stretch. When Tony Mitchell makes a play, it's more than likely to end up on a highlight reel. If you haven't seen this dunk yet for some reason, do yourself the favor. Even if you've already seen it, it's worth another look. He also had a couple of violent blocked shots that got the crowd going too.

It was a sellout crowd, and with the exception of only a few dozen empty seats in the top corner of the student section, and a few empties scattered throughout the Tide Pride seats, it was a packed house. It was a great crowd that got very loud when the game was on the line midway through the 2nd half. With the team playing on short rest, I do think it played a factor in the increased energy to close the game. Arkansas looked like the team that was tired down the stretch. 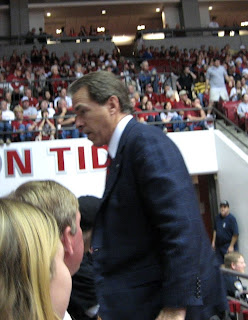 Coach Saban on his way to his seat to take in the win with Barry Sanders Jr. 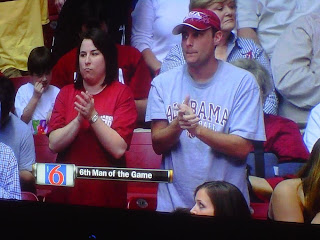 Yours Truly along with our great photographer, doing our part as the "6th man." 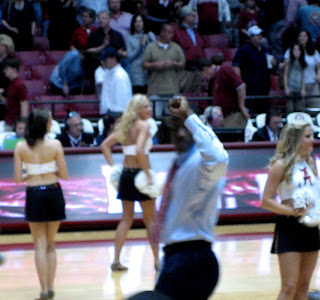 Coach Grant Salutes the Crowd after the win. If this man isn't the SEC Coach of the Year, there should be an investigation.

I apologize for the delay in getting the recap and pics posted. I stuck around Tuscaloosa today and went to the women's game. Congrats to Coach Wendell Hudson and team for getting another win at Foster, despite blowing a 21 point lead to Ole Miss.

Up next, the hapless auburn tigers come to Tuscaloosa for a 7pm tipoff Wednesday night. The game will be televised on the SEC network. Yes, auburn sucks, but despite our record we are not good enough to overlook anybody. For them, a win over Alabama to knock us out of the NCAA tournament discussion would make their season. Let's pack the Coliseum again and support the SEC West Champions in making sure that doesn't happen.
Posted by DJC at 12:43 PM

Regarding Senario: Pay attention to the bench reaction after Tony's dunk. Everyone is excited, except Senario who merely sits there as the place is going nuts. He's obviously not on the same page with the rest of the team right now, hence his loss of minutes.

I really like Senario - always have - but if he's not willing to give it up for the team, maybe it's better he remains sitting.

As far as the game: This team continues to show its toughness. The run to end the game was something we all witnessed other teams do to Alabama over the years. Things have definitely changed. Assuming we can hang onto him, the future is bright with Coach Grant.

After the game, Senario stayed for at least 10 min. signing autographs for every little kid that wanted 1. I am sure he is disappointed being his senior year and seeing his playing time reduced. Having said that, when he is in, he plays hard, and more importantly is playing under control. If we are going to get to the tournament, he is going to have to give us some good minutes. I would not write him off just yet, because he is not jumping up and down over a dunk. Remember, it's not like he is not a high flyer himself. Maybe an alley oop doesn't impress him like everyone else. Hopefully, he will get more playing time soon, if not, this team will have dead legs at the end of this season.

I agree with Lee. I sit with a view of the bench. Senario appears a little down as one would expect with his reduced minutes. I suspect he would have gotten a few more minutes in the 2nd half if CD had not been doing such a great job on Rotten. I do not think that Senario is at all down on the team and I expect tht he will make some major contributions before all is said and done. I love his effort and overall attitude. GumpW

A couple of other things:

Congrats to Tony Mitchell for winning SEC Player of the Week. It's great that he is finally getting the recognition he deserves.

Bracketology: ESPN's Joe Lunardi has us as a 10 seed in the Southwest playing George Mason in Tulsa, with a potential matchup in the 2nd round against Kansas. Bracketology 101 has us going to Denver as an 11 seed in the East to play West Virginia in the first round, with a potential 2nd round game against Wisconsin. Jerry Palm continues to maintain that we are not a serious candidate for an at large bid.

Lee: First, I think I made it clear I like Senario; I'm not knocking him. Believe me, I hope he has an explosive game before his senior season ends. Secondly, it has nothing to do with whether or not he is "impressed" with a dunk. When your whole bench is up and into the game and you're sitting there showing no emotion whatsoever, it's noticeable. Who cares if he's impressed or not? Show some love for your team mate. That's all I'm saying.

I'm sure it's been tough for Senario during his four years, having gone from being a Sportscenter Top 10 plays mainstay his freshman year to only playing 8-10 minutes a night this season. Unfortunately, his game just hasn't developed much past being a great athlete. However, with this being his final year I hope that's he's happy to be in the situation he is in that he can go out a winner after having to endure some mediocre seasons his first three years.

Regarding Jerry Palm: He seems unwilling to admit to the hyperbole he unleased on the Finebaum program a few weeks back when he tore the SEC West a new one. Sure, the division is still down, but it's actually had some success against the East this season. And Bama is certainly a tournament team if the season ended today. The bottom line is that the last 5-10 at-large teams taken this season are not going to have stellar resumes. At least Alabama has improved over the season unlike some of their bubble counterparts. If Bama makes the tournament, the team that draws them is going to have a battle on their hands.

I think Lunardi has Alabama a little high. I think if the tournament was selected today, the best Bama could hope for is an 11 seed.

Bill lots of work on this article
Thanks.

". The bottom line is that the last 5-10 at-large teams taken this season are not going to have stellar resumes. At least Alabama has improved over the season unlike some of their bubble counterparts."

I agree with this completely. We very easily could be riding a 17 game winning streak right now. I don't know what Alabama has to do to get noticed.

Sure the conference in general is down, but being 10-2 in ANY power conference is impressive.