Alabama survived the dangerous trap game by building a 23 point lead and hanging on for a 10 point win. Andrew Steele started over Tony Mitchell for some reason. Steele played a good game, scoring 9 points and getting to the free throw line by driving the lane. His return has been a very pleasant surprise, and he gives us another option on offense. I would like to see him taking a few more shots.

Charvez Davis rebounded and had a great game. He drew the tough defensive assignment of guarding Chris Warren most of the game, and holding him to 15 points is pretty solid. As bad as our offense has been at times this year, we put on a clinic in the 1st half, scoring 47 to lead by 20 at the break. When guys like Davis and Releford are making 3s to free things up for Tony Mitchell and Green inside, this team is pretty difficult to defend. 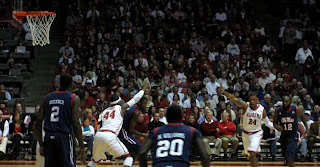 Chris Hines continues to play great defense in the post. 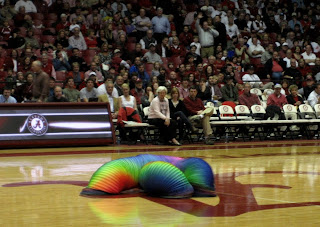 Charles Hankerson even came in for a couple of minutes and played pretty good. He got a rebound, scored a basket, and didn't give up anything on defense. Maybe he will be able to contribute some minutes down the stretch after all.

Alabama did show some signs of fatigue. I thought we got a little too complacent with a 23 point lead. Tony Mitchell got beat at least twice on defense in the open court because he was slow to move his feet, which is very uncharacteristic of him. Of course, he still came off the bench to silently lead all scorers with 20 pts in addition to leading the team in rebounds. Senario, Releford, and Green all picked up some bad/dumb fouls at times for either reaching in unnecessarily in the back court or getting beat and being caught out of position.

JaMychal Green needs to be careful. I love his aggressiveness, and he is a big part of the reason why we are 8-2. He plays solid defense and is the key to our offensive in the post. We are a pretty bad team offensively when he is not in the game. Nevertheless, he is developing a reputation as a hot head and teams are trying to take advantage of that. #1 for Old Piss was almost able to bait him into a technical foul at the most inopportune time in the 2nd half. Thankfully, the officials did not see JaMychal throw an elbow in his direction.


Ole Miss made some long 3s and we gave up some offensive rebounds on missed free throws, although I felt a couple of those should have been called over-the-back fouls. The Rebels were able to cut the lead to 6, but Coach Grant did a good job of using timeouts to get the team refocused and they answered with some big defensive stops and scores to put the game away. 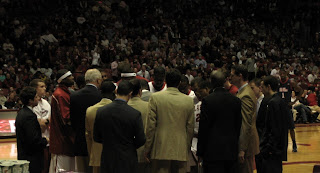 Regrouping during a timeout

The crowd was very close to a sell out, but I was disappointed with the few hundred empty seats in the student section. Still, there was probably around 14,000 there, including Levi Randoph and Coach Nick Saban with his wife Terri. It's great to see the Saban's supporting basketball even on a non-football recruiting weekend. 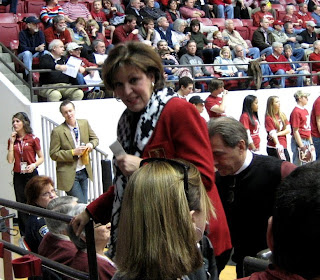 The Sabans make their way to their seats.


Obviously, we focus on men's basketball here, but I stuck around to watch the women win a historic game by beating Florida in their first game at the newly renovated Foster Auditorium today. So, after one day, our women have the same number of SEC wins in the new arena as auburn's men do in theirs, despite auburn having played there the whole season. 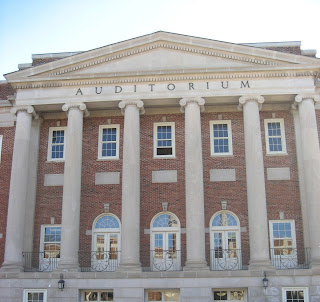 I used to follow the women's team fairly closely. In fact, my cousin is the program's all time leading 3 point % shooter. I was skeptical as to whether the move to Foster would be a good thing for the program, but I am now on board. The atmosphere was great, and it got really loud. The lower capacity makes it feel like a bigger crowd. They really did a fantastic job with the renovations.

We all have different memories of Foster Auditorium. Of course, the first thing that comes to mind is the George Wallace v. Vivian Malone stand off. While that incident was one of many black eyes our University and state endured during the Civil Rights Movement, the courage of Malone and Hood ultimately prevailed, making the event a most important part of the University's proud history. 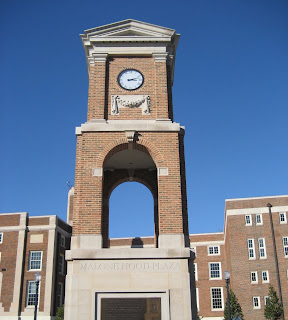 Older generations remember watching men's basketball games there in the pre-Coleman era. Other grads recall going there to register for classes. For me, it was a place to sneak into for late night pick up basketball games, often with members of the football team. Going forward, it will be home to the Lady Tide, and one of the most unique women's basketball venues in the country. I will definitely go back.

Awesome Video Board in Foster 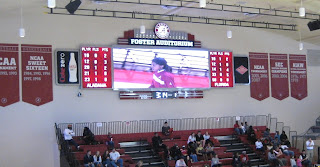 Video Board with banners. 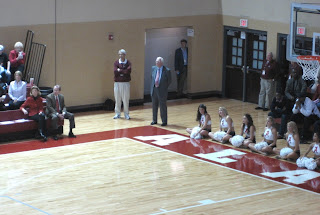 AD Coach Moore, along with President Witt and his wife take in the women's game. Coach Grant and Coach Brannen were also there. 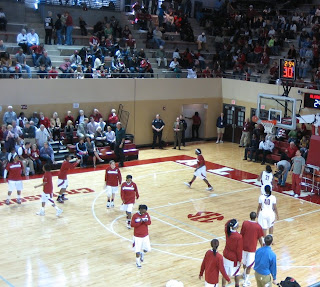 Women's team warmups prior to start of 2nd half 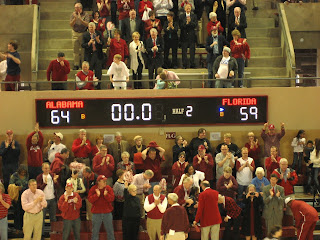 Bama overcomes a 10 point halftime deficit to get the win.

Thanks again to my gf for taking the pics.
Up next, we go to the Bayou to take on the LSU Tigers Thursday night at 8pm. The game will be televised on ESPN2.
Posted by DJC at 1:17 PM

DJC, great summary and observations from the Ole Miss game. Thanks also for the report from Foster Auditorium. They had a few concerts in Foster when I was a student, mostly bands they did not think could fill Coleman Coliseum. We used to play our intramural basketball there. I was the 7th man on one team for a couple of years. They would call me if one of the real players let them know he would not be able to show up for some reason. I seldom got more than about 8 feet beyond the midcourt stripe after the first five minutes of either half. :-)

I too registered at Foster and shed intramural blood, sweat and tears there. Also saw the Allman Brothers Band WITH Duane. Is the star still in the floor there where what's his name hit the 89 foot field goal?