First the box score. I'm going to break this up into 3 topics: The game, the arena, and the fans.

The Game
I was unaware that Mitchell didn't start the 1st half as we walked into the game about 2 minutes in. UT jumped out to an early 9-4 lead, but we fought back and rallied I believe to go up 10-9. I believe from that point to the latter part of the 1st half we were either up by 2-4 or down a bucket. Then we made a late half run and bumped the lead to 11 thanks to some hot shooting and defensive pressure on the ball. I believe we were 16-24 in the 1st half.

The 2nd half was sluggish to say the least. At one point UT outscored us 6-4 5 minutes into the 2nd half. Then they went on a run. For a while it seemed every time they got within a score we'd put one back to push the lead to 2 scores. Then they took the lead, but we came right back to regain it. I don't think UT had a lead more than 2 in the 2nd half.

As we struggled to hold off the Vols, we took way too many perimeter shots. I'm looking at you Mitchell. There's no reason for him to shoot 8 from beyond the arc. His game is slashing, junk scores, and maybe some mid range jumpers. Despite being our leading scorer, I think he was killing us with the outside shot. Proof: he was 9-18 overall, but only 2-8 beyond the arc. That includes a curious fadeaway 3 with 33 seconds on the shot clock. I thought I was watching Double Dribble (google it- the Nintendo game) and DJC and I concluded he had to have thought the shot clock was expiring.

Speaking of strange, Charvez Davis only took 2 shots, finished with a big fat 0, but played damn good defense. While Releford only hit 1-3 from beyond the arc and turned the ball over too much, I like him taking more shots. Despite his turnovers, I believe he set the pace for our offense in the 1st half.

From what I understand Green had the flu so it explains his game. Still, he was fighting for every basket, rebound, and block shot. I want to get on to him for shooting outside of his range (I counted 3 shots with his foot on the women's 3), but his FTs in OT saved our bacon. Our bench play was erratic with Eblen not being a factor and Hillman being Hillman with great plays (back to back buckets late in the 2nd half to push the lead back to 6) and his typical out of control moments resulting in bad shots.

Speaking of OT, when UT took a 2 point lead with under 3 1/2 to play we did the smart thing and pounded it to Green. He got fouled and hit his FTs. Then Mitchell did the same and hit his. And Releford hit his. I think we were 10-10 from the line in OT.

All in all, a GREAT WIN on the road vs a top 20 RPI team! My kid enjoyed it so much it wore him out. 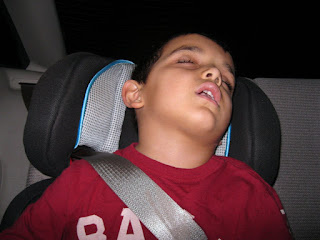 The Arena
From the outside it looks like a dump. Like if the name wasn't on the arena I would've sworn it was a big office building from the 70s. Inside, it is sweet. 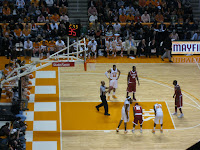 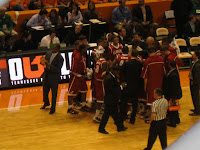 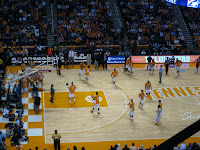 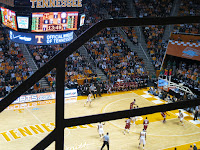 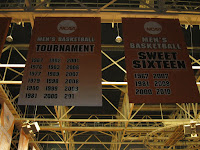 Despite the puke orange and the rail in front of my seats, I thought the view was nice. It gets loud in there.

The Fans
We brought more fans than I thought we would. I would guess around 500 or so were there. I even saw a lost lil Barner walking around with his Barner garb and a barner basketball. I wish I was fast enough to take a picture, but I did make the comment that he was lost which drew laughter from the sea of Orange around me. What would possess someone to do this?

The Vol fans were great to me and my boy. Not one bad word from them outside of cursing the officiating... which was deserved.

Final thoughts: It was a physical game that the refs totally jacked up. One minute they were letting them play, the next they were calling touch fouls. SEC officials suck. How do they get hired? I hate the song Rocky Top. I'd sooner listen to 24 hrs of Rick Ashley's greatest hits than endure that damn song for more than 2 hours.

Last thing... we got some road cooking from the officials. I'll take it. The 1st half we were getting all the calls... even the ones that should've gone the Vols way. I'm so proud of this team. It's about a 180 from the Providence game when I said to myself watching this team took years off my life. Whatever changes the players and the staff made between the Paradise Jam and the start of the conference schedule have worked. This team gels like the 2003 squad.

We are the best in the SEC. People in the conference BETTER RECOGNIZE! And we're in the NCAA Tournament discussion now.
Posted by bobbyjack at 10:45 AM

Mitchell's 3 point heave in the second half was because he did not know the shot clock had been rewound. He had a sheepish grin on his face when he realized what happened.