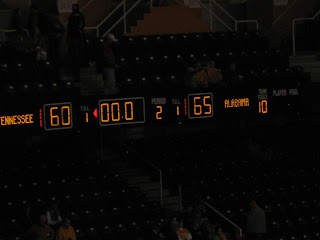 Bama improves to 7-1 in the SEC with a 65-60 overtime win on the road over a top 25 team. We are now halfway through league play, and maintain a one game lead in the conference over Florida.

I will preface this analysis by stating that I watched this game from WAY up high in the rafters. The inside of that arena is much nicer than it used to be, but its too big. We were sitting way up in the corner. 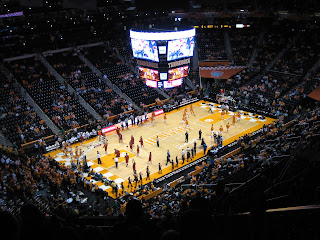 The view from our seats.

Apparently some of the guys were feeling under the weather, and as a result Andrew Steele got the start over Tony Mitchell. Tennessee got off to a fast start and took an early 9-4 lead. With UT's top scorer out and them not being a good shooting team, we mostly ran a zone defense, but did a good job of switching it up at times to keep them off balance. With Mitchell and Hillman in the game, we switched to a full court press that forced some turnovers and gave us some quick baskets that allowed us to build an 11 point lead going into halftime.

Our offense was pathetic in the 2nd half. Tennessee deserves a lot of credit for that, as they were beating us at our own game for a good part of the 2nd half. With our bigs in foul trouble, we were terribly out rebounded. UT was getting 2 or 3 shots per possession whereas we were limited to one, which often was a low percentage, contested shot from the perimeter. It was a physical game and they were forcing Green farther outside than he would have liked. They knew we couldn't shoot so they could play off the perimeter and focus on shutting us down in the paint. I thought we got frustrated at times, and Green and Mitchell especially took some bad shots from outside of their range. We really need Charvez to learn how to shoot on the road at some point.

One thing I love about this team, they don't let their offensive struggles effect their defensive efforts. A lot of teams get frustrated when they aren't scoring and have a few lapses on defense as well, but not Alabama. Tennessee made a run and took the lead, but Alabama showed great poise by getting some key stops and regaining a 6 point lead. We should have won the game in regulation, but we missed some shots at the foul line and had some bad turnovers down the stretch that allowed UT to come back and force overtime.

This team has great chemistry and a great attitude. After turning the ball over in a tie game to give UT the last shot, half of the bench met the players on the floor at half court when UT called the timeout to set up their last play. I love the positive attitude and body language. There was no sulking about blowing the lead, nobody pointing fingers for ill timed turnovers; they were genuinely committed and excited about getting a stop and forcing overtime.

I agree with Bobbyjack that Mitchell needs to stop chucking 3's, but he does so much else for us that I am willing to overlook it. He may be the most underrated player in the SEC. He has the body of, and primarily plays the 3, but he has the ups and strength to play the 4 when necessary, and does a great job of doing so. He even played the 5 for a couple of minutes when both Green and Hines were on the bench with foul trouble and an injury. His defense was spectacular and he was our leading scorer, all while coming off the bench and playing with the flu.

JaMychal Green did not have his best day. He was also playing sick, and struggled from the field. He missed some FTs that could have put it away in regulation, and had a bad turnover that allowed UT to take the last shot with a chance to win at the end of the game. Nevertheless, Coach Grant had the confidence to run the offense through him in the overtime period, and he responded by getting to the line and making all 6 FTs in crunch time. We were 10 for 10 from the charity stripe during the extra period.

Despite the 1 to 4 assist to turnover ratio, I thought Releford had a solid game at point. He played 42 minutes and scored 13 points. The Tennessee fans sitting around us were very impressed by him. I like to see him being more aggressive and taking more shots when the offense goes into these long funks.

The UT fans were nice to us for the most part, aside from a few accusing us of having bought the refs. It was the type of physical game that would ultimately leave the loser feeling like they got the shaft in regards to officiating. For most of the 2nd half, they called a lot more fouls on us than they did UT, but that doesn't neccesarily mean we were getting screwed. I can think of a few calls that I definitely thought we got the benefit of, but I'm not comfortable criticizing the officials from where we were sitting.

We have certainly caught some breaks to get to this point. If UT has Bruce Pearl coaching, Hopson playing, and/or was not coming off of an 8pm Thursday night road game, this game probably would have had a different outcome. Nevertheless, it was still a great win in a hostile arena against an RPI top 20 team. If we continue to take care of business at home and win the games we are supposed to win, we are now legitimately in the NCAA tournament discussion. The way we play defense, I don't think anybody would be excited to see our name show up in their bracket on Selection Sunday.

Thanks to my gf who took these pics around town and at the game: 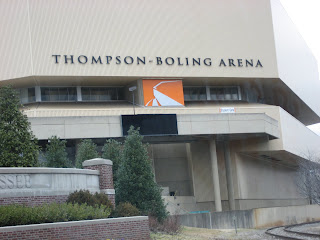 As Bobbyjack mentioned, the outside is FUGLY! 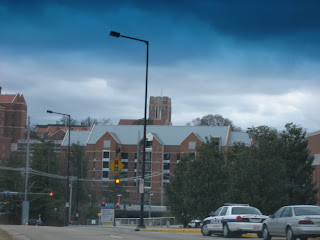 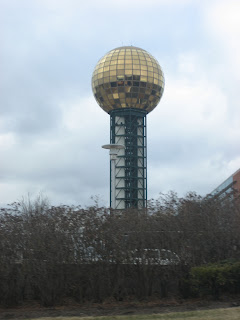 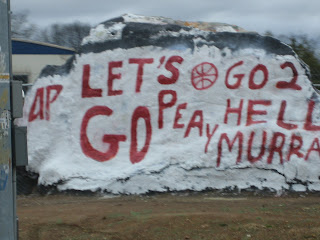 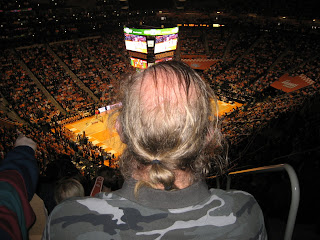 This was my gf's view for the start of the game. That dude was also sporting a ZZ Top like beard. Yes, he smelled about like you would imagine. Thankfully, he was in the wrong section and soon became somebody else's problem. 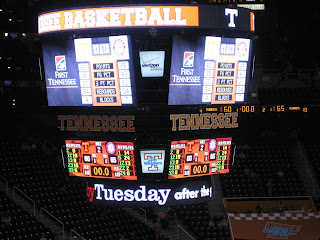 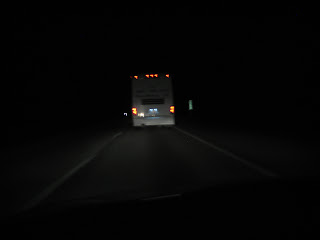 We are assuming this is the team bus headed home with a W. We stopped for dinner in Chattanooga, and shortly after getting back on the interstate we were passed by a Tuscaloosa bound bus, and we could see through the windows that they were watching basketball on TV. On the off chance the bus driver is reading this, please be careful with these guys. You were all over the road.

Up next, we travel to the house of horrors known as Memorial Gym in Nashville to take on the Vanderbilt Commodores. We have not won up there since 1990, but this is Coach Grant's first crack at it as head coach, and I actually think we match up fairly well with them. Tip off is set for 8pm Thursday and it will be televised on ESPN2. ESPN2 has consistently missed the first few minutes of games in this time slot all year. Weather permitting, I am going to try to make the trip.
Posted by DJC at 12:14 PM

JaMychal never touched the ball going out of bounds late in the 2nd half. It should have been Bama's ball with a chance to win in regulation.

Well, we get the late Thursday then Saturday afternoon week. Hope we won't get too tired for Sat's game against 'Lil Siss.