Alabama swept $tate for the first time since the 2004-05 season with another comfortable victory at home. The Tide now has a commanding 3 game lead in the SEC West and maintains the one game lead over the entire conference. There is still a lot of basketball to be played, but you have to like our position right now.

My gf took some pics from our seats at the game. I am going to try to incorporate them throughout the post as opposed to attaching them all at the end like I normally do. Please let me know in the comments if you like it this way, find it distracting, or don't care.

Another solid game from JaMychal Green even though he ended up fouling out. He went right at $idney to the start the game and sent the fat thug to the bench with 2 early fouls. This allowed our guards to play tighter man to man defense, which forced some turnovers and led to some easy scores giving us an early lead. A great gameplan by Coach Grant and great execution that really set the tone for the game. 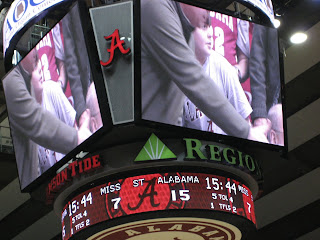 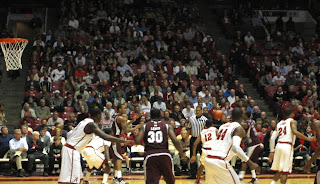 We continued to use the press a good bit, which was surprising to me considering how good of a PG Dee Bo$t, but it was effective, as we forced him into 5 turnovers. I do think it cost us a little as Tony Mitchell looked tired toward the end of the first half. Tony had to play nearly the entire game as Chris Hines was sent to the bench early with foul trouble. I was afraid we would really miss Chris down low, but Tony stepped up with a career high 23 points including a few of his usual powerful dunks that always gets the crowd involved and gives us a spark. This is what good teams do, when one piece of the puzzle is not there for some reason, somebody else steps up. Tony Mitchell did it all for us last night.

$tate switched to a zone defense which gave us some problems at times. While we shot 7 of 14 from 3 pt range, including 5 of 8 from Davis, I would like to see those stats broken down into two categories: Shots taken from passes from the interior versus off the dribble or from a pass around the perimeter. After we made a couple of early 3's, I thought we got a little too complacent in just trying to shoot over the zone versus attack it. A shooter will generally make more perimeter shots from kick out passes from the post or PG's penetration than off the dribble or from perimeter passes, because you are able to step into your shot with better rhythm.

We actually did a great job of managing the clock at the end of the first half. We forced a shot clock violation on $tate (actually, we had possession of the ball before the horn sounded so there should not have been a whistle, but it worked out the same either way). Coach Grant actually used the "use it or lose it" timeout, and drew up a play for Releford to run down the clock, drive the baseline, and find Charvez on the opposite wing for the last second shot. Davis knocked it down to give us a 12 point lead at the half. 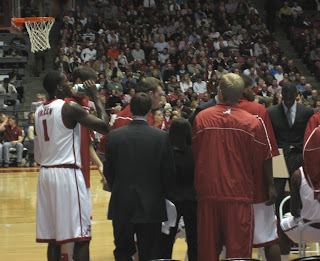 Grant gathers the team during a timeout.

With $idney back into the game in the 2nd half, we did a good job of making his fat ass run. He was consistently 10-15 seconds behind everybody else getting back on defense. I wish we would have ran some more quick hitting plays offensively to try to take advantage of the 5 on 4 situation. We built an 18 point lead, and decided to give Releford a rest so he would be fresh for the end of the game. Releford was the key to our offense tonight. We had a very difficult time scoring without him in the game, because he seemed to be the only one who could penetrate the zone. His drive and dish game was excellent, with 8 assists to only 2 turnovers, and he added 16 points himself. $tate seemed to get to the line nearly ever possession for a while in the 2nd half, and they were able to cut the lead down to 9 with Releford out of the game. Thanks to some great defense, they were never able to seriously get back into contention. 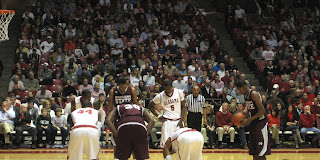 $tate shooting FTs, a common sight in the 2nd half.

What I am about to say may step on some toes, but it needs to be said. I am calling out our fans. We are in 1st place in the SEC, playing at home against our biggest basketball rival, and attendance was only around 10,000. That is pathetic and unexcusable. We are going up against some elite, traditional basketball schools for some of the top prospects in the country, including Trevor Lacey who was at the game last night. Coach Grant and his staff are doing their part of the process of building something special here. The players are working their asses off and doing more than their part. As fans, we have a role in this too. We can't control our history or tradition, but we can control our attendance and atmosphere at games and we failed miserably last night. The student section wasn't even full, and that is beyond ridiculous for a Wednesday night game. I don't get it, we pack it out against a God awful LSU team, but it's only 2/3rd full against our biggest rival? Kentucky would have twice as many for a scrimmage. If we want to keep kids in state, we need to step up our game. All of that being said, the fans who were there last night were loud and I think we were into $tate's head. The boxing gloves and "fight fight" chants directed at $idney were a nice touch. 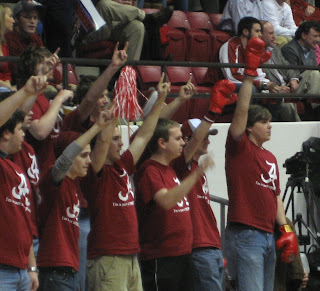 Students wearing boxing gloves, ready for a bout with $idney 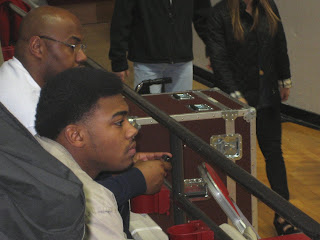 Trevor Lacey takes in the game. He was sitting in close proximity to me. Honestly, he looked bored early in the game, but seemed to be enjoying himself more as the night went on.

Up next, the Tide travels to Knoxville, TN for a 5pm EST, 4 Central tipoff against the Tennessee Vols. The game will be televised on FSN. We will be underdogs, but a win would change the talk of SEC Championships and NCAA tournament appearances from a pipe dream to a distinct possibility. Fans of elite basketball programs travel to see their team on the road. Knoxville is a short drive for most of North and Central Alabama, and the tipoff time is very convenient for making it up and back in one day. Bobbyjack and I are making the trip from Atlanta and Birmingham respectively. Who's with us? Tickets are available here.
Posted by DJC at 11:43 AM

If Kouandjio had signed with BAMA, the stands would have been full. NSD took emotional toll on the base.

To add... decent seats available for the game tomorrow.