We all would have been happy with a split of the Tennessee road trip coming in, but it's quite disappointing to have a lead with under 30 seconds to play and come away with a loss. This game had a little bit of everything, a lot of positives, a few negatives, and some controversy at the end. Thanks to my friend for hooking me up with a great ticket. 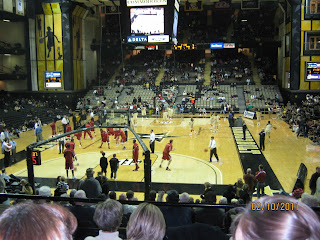 The view from my seat.

I give Coach Stallings credit for being the best X's and O's coach in the SEC. They lit us up, especially in the first half, but it was not due to a lack of defensive effort on our part. Vandy moves without the ball and sets screens as good as anybody in the country. We actually did a pretty good job of defending Jenkins and Tinsley on the perimeter, but they just have too many players who can shoot the ball. Jeffery Taylor went off on us, and everybody else they had seemed to knock down shots as well. They don't even have to get penetration, all they need is a decent look at the basket and it is going in. If we play man, they would eventually get somebody open off of a screen. If we played zone, they would just pass it around the perimeter and shoot over it. When most teams get an offensive rebound, they go back up for the put back. Not Vandy, they take advantage of all the defenders being in the paint for the rebound, and kick it back out for a wide open 3, which they usually make. I'm really not sure how you can defend that, other than not let them get any offensive rebounds.

Conversely, we have no outside game whatsoever. We tried to play their game for a good part of the first half, forcing several 3's and not making any of them. This allowed Vandy to build an 11 point lead. Thankfully, we started getting the ball to Tony Mitchell on cuts through the lane, along with some help from Green, and Mitchell finally made a 3 at the buzzer to cut the halftime lead to 3.

I think it's time to shake up the starting lineup for away games. I would start either Senario Hillman or Andrew Steele at the 2 over Davis. I like Charvez at home, but it's becoming obvious that he can't shoot anywhere outside of Coleman Coliseum. He forced some ridiculous shots and found himself on the bench until our final offensive possession.

In the 2nd half we finally turned up the full court pressure which forced some turnovers that led to easy scores, and at least disrupted Vandy's offensive rhythm a little bit. It seemed like every time we took the lead, Vandy would answer and stretch their lead back out. We made the necessary plays down the stretch to hang in the game and have a chance to win. Free throw shooting was great, as JaMychal consistently got to the line and knocked them down in the second half.

There were a number of controversial calls down the stretch. First, with 2 or 3 minutes left and Bama down by 3, Tony Mitchell appeared to get hit in the face when he got his shot blocked. From where I was sitting, the initial block appeared clean, but then Tony regathered the ball and went up a second time, and got hit in the face. No call. Next, after Releford made a shot to give us a 1 point lead with 40 seconds to play, he picked up his 5th foul on an "And 1" by Vandy's white guard with 17 seconds left. At the game, I thought it might have been a good call, but many people who I've spoken to who saw the replay on TV said not so much. That was a huge call, not only because it stretched the lead to 2, but it left us without our star PG for the crucial final possession and potential overtime.

There was some discussion about our play call at the end of the game. My friends thought we should have gone for 3 and the win, and I understand that line of thinking. We were on the road, we have a quick turnaround with our next game, and our only good PG had fouled out. Nevertheless, I agreed with Coach Grant's decision to attack the basket with JaMychal. If we had any decent 3 point shooting options, it would be different, but JaMychal might have been able to get an old fashioned 3 point play, and stood a good chance of either scoring to tie or making 2 free throws. Momentum would have been on our side going into OT after Vandy led most of the game, and we would have confidence coming off the OT win in Knoxville.

None of that mattered, because Tim Higgins said Green stepped on the line. Obviously, I couldn't tell from where I was sitting because the play happened on the other end of the court, but it appeared to me that Green was pushed as he drove by the defender. Coach Grant had a great angle due to the stupid configuration of that gym, and he went ballistic. My phone was blowing up with txt messages from people watching on TV back home who said he didn't step out of bounds. The Vandy radio announcers referred to the call as "controversial" on their post game show. The call is even getting some national attention with the general consensus being that we got screwed.

The officiating crew further jacked things up by failing to grant Coach's requested timeout before Vandy's last free throw. Frankly, we were better off with him not granting it, because it was our last timeout and if he would have missed, then we would have got the rebound 95 ft from our basket with no way of stopping the clock. Nevertheless, Grant ripped them a new one when he was finally awarded his last timeout, down 4 with 6 seconds to play. I suspect Coach actually wanted to get a technical at that point, as he was all the way up on the sideline where the coach's box would be in a real gym.

It was a great effort, and would have been a great win, but we are still in good shape if we take care of business at home and against the inferior teams left on our schedule.

It was my 4th or 5th trip up there, and that arena is still a piece of garbage (edited for the sake of keeping this a family site). Obviously, the configuration sucks, there are 15,000 seats and not a good one in the house. They have something like 24 scoreboards but they don't have one in the center over the court. Instead they have a tv screen that produces an image that would be state of the art if this were 1974. Apparently, they don't even have the capability of showing a replay, as I didn't see one all night.

Even though the game was a sellout, there appeared to be a lot of empty seats scattered around. The ridiculous configuration of that arena makes it difficult to give an estimate, but I would say 11,000 or so. There were at least 1,000 Alabama fans scattered throughout, mainly in top levels. The atmosphere was good, and the Vandy fans were loud. I thought Kentucky fans were the worst about wanting every single call, but these people were ridiculous. They booed EVERYTHING. Everytime we got a steal or a stop on defense they thought they were fouled. A couple of their fans were nice to us before the game, but for the most part they were a combination of old, rich snobs, and dorky jerks. One nerd decided to yell "war eagle" in my ear as I was trying to get out of the arena. I should have let it go, but instead I started jawing with him, and another dork decided to push me in the back. Thankfully, he apologized and backed down when we confronted him. Believe it or not, the Tennessee fans in Knoxville were 10 times classier than that private school, silver spoon bunch in Nashville. I hope Kentucky beats the hell out of them Saturday.

Up next, a quick turnaround for a 3pm start against the Ole Miss Rebel Black Bears Saturday at Coleman. Whoever they are, they have been playing pretty good lately, and come in on a 3 game winning streak. Show up, be loud, and support this team. They will need the boost to bounce back from such a disappointing loss with little time to rest and prepare.
Posted by DJC at 12:46 PM

More on the officiating, apparently the SEC is going to review some of those calls. Of course, we'll never hear anymore about it and it won't do us any good.


Just to clarify, I am not saying the officials cost us the game. Obviously, our inability to shoot was the biggest factor, but also, lack of depth. We were at our best when we were pressing, and I believe if we had 2 or 3 more bodies that could give us quality minutes, you would have seen a lot more of it, especially in the 1st half.

That being said, I do think the officials cost us a CHANCE to win it late. Would Green have scored? I think he had his man beat, but who knows. Even if he does score, odds are still against us in overtime. Still, it would have been nice to see it play out.

Very proud of the team, but for whatever reason, our guys looked a half-step slow against Vandy. (Getting a body on the 3point shooter and chasing down rebounds.) As someone said, maybe coach was trying to save team energy for the end of the game. (Something I think he did purposely last year.) A couple more skilled bodies could have saved the day.