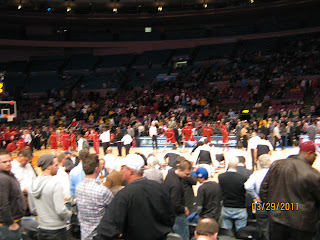 The view from my seat. My gf was not able to make the trip, so pictures are sorely lacking in both quality and quantity. My apologies.

The battle of the two most deserving teams left out of the NCAA tournament lived up to its hype, with Alabama pulling out a one point victory in the final minute.

We led by as much as 11 in the first half thanks to JaMychal Green's post moves and his mid-range jumper, and the pressure defense keeping Colorado locked down and creating turnovers.

We couldn't put the game away, as Colorado was able to make just enough perimeter shots to stay in it. Whenever Releford or Green wasn't in the game, we seemed to go into somewhat of a funk.

The Buffalos torched the nets in the 2nd half, and when Green picked up his 4th foul with about 8 minutes to go, things were not looking good. We struggled to score offensively, and they took advantage of their size on the court on the offensive end. When we resorted to playing Carl Engstrom for several minutes midway through the 2nd half, I thought we were toast.

Thankfully, Coach Grant decided it was worth the risk to play Green with 4 fouls, and he did a great job until fouling out with almost 4 minutes left to play. Things were not looking good at that point, but Tony Mitchell stepped up and played big on the defensive end, and we forced some key turnovers down the stretch to put us in position to win the game. Releford got to the rim and made the game winning layup with 13 seconds remaining to send us to the championship game. 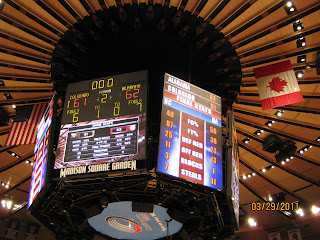 As you can hopefully tell from the pics, I had pretty good seats. In fact, I ended up sitting right next to Marty Lyons. He seemed like a super nice guy and you can tell he really loves the University of Alabama. He does the radio broadcast for the NY Jets now. He was kind of enough to share some of his insight and opinions about football during timeouts and halftime. It was truly a pleasure to watch a game with him. Also, I got to briefly meet JaMychal Green's family at a pizza joint after the game. They were very nice and classy folks; it's obvious where JaMychal gets it from. We should all be proud to have them representing our University.

The arena was not even close to being halfway full, with nobody sitting in the upper levels. To the naked eye, it appeared that Colorado had a lot more fans than us, but keep in mind Wichita State shares their colors. While Washington State's colors are similiar to ours, most of their fans bailed by the end of the 1st half of their game. I still think Colorado had slightly more fans than us, which is disappointing, but they certainly had more students and more enthusiastic fans. Most of the Alabama faithful there were NY residents with ties to UA who showed up to support the Tide because we don't often play in this geographic area; but were probably wishing it was football instead.

Madison Square Garden is a great place to watch a basketball game, but I'm not certain that it's not a bit overrated. I didn't go up there, but the upper levels sure do appear to be a long way from the court. The concourse and lobby areas are not even close to some of the nicest I have seen even at the college level. I can see why players love it though, the lighting on the court looked excellent and the darker background and neutral colors in the seating areas would likely make a very nice shooting background. 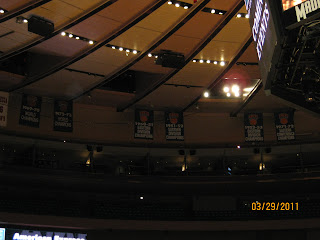 New York Knicks Championship banners. You have to respect their tradition, but the lack of anything significant from the 1990's brings a smile to my face.

Up next, the Wichita State Shockers, on this same court Thursday night at 7pm EDT, 6pm Central, for the postseason NIT Championship. We have never won this storied tournament, and so this another chance for this special team to make Alabama basketball history. I thought Colorado would be our biggest obstacle, but Wichita State easily defeated Washington State and is playing very good basketball. Furthermore, I cannot over emphasize the tremendous following they have. They had more fans at our game tonight than both us and Colorado combined. Kansas is a great basketball state, and with the Shockers not having a football program, they enjoy surprisingly good fan support for a school of their size. Unfortunately, this will be like another road game for us. Let's find a way just one more time.
Posted by DJC at 12:40 AM

It was late and I was tired when I posted this, and I'm too lazy to go back and edit, but wanted to make note of a couple of other points:

1. Our free throw shooting was an unmitigated disaster. If we are halfway respectable at the line, the game isn't in doubt at the end.

2. There were a few questionable calls, but frankly, I thought we got the benefit of the big ones.

3. Giving Engstom minutes with Green in foul trouble, and especially letting Hankerson play in crunch time, tells me that Coach Grant is using this as a means to get the young guys some experience on a "big stage" as much as anything else.

A win tomorrow night would be sweet, but we are laying the foundation for the future.

"Kansas is a great basketball state, and with the Shockers not having a football program, they enjoy surprisingly good fan support for a school of their size."

one, kansas is (like you said) not a football crazy state like alabama. if anything it's a basketball state. it doesn't surprise me that wichita has a great following. they're the only game in their podunk town. their boosters care enough to cheat.

two, like alabama, there's one state school, kansas, that dominates or should dominate. history shows that if kansas state or wichita state, like auburn, is having ANY level of success, they're cheating to do it.

Is it me, or is T. Mitchell the weathervane for how the team performs.
ie. If BAMA's highlight machine has a good game, we win easy. If he plays poorly, we struggle.

P.S. Green getting in foul trouble may be a result of trying to do more to offset a sub-par effort from T.M.

it's been my observation that when green inevitably gets that fourth stupid foul he normally gets with about seven to eight minutes left in the second and has to ride the pine, the team usually steps up and either come from behind or adds to it's lead.

that's why it's been heartening to see grant working engstrom into the games getting him experience.

next season's team with a hopefully smarter and more experienced green with some quality relief off the bench for him will take the pressure off down low.