Alabama beat UGA for the 2nd time in a week, putting the Bulldogs NCAA hopes in serious jeopardy while greatly increasing our chances. 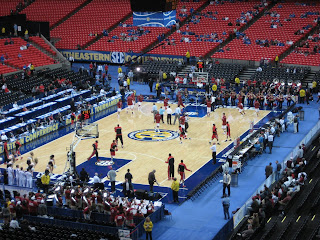 The view from our seats

Coach Fox made some great adjustments for UGA over the past week. They played us in man to man defense for much of the game, and we appeared to be expecting to see more zone. In the game in Tuscaloosa, we forced a lot of turnovers in the full court press because UGA was making poor lob passes trying to break it. Today, they faked the lob and utilized the bounce pass and had much more success, at least until the last 6 minutes of the game.

Much like the last game, UGA jumped on us early. We fell behind 9-2 early in the game before coming back to tie it at 19 in the first half. We came back in large part thanks to our trapping defense, but Georgia figured out how to break it and made 3 consecutive open 3 pointers to take a 9 point lead. For the next 25 minutes, it looked like that would prove to be the difference in the game, as our halfcourt offense was an exercise in futility. 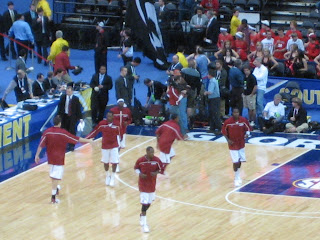 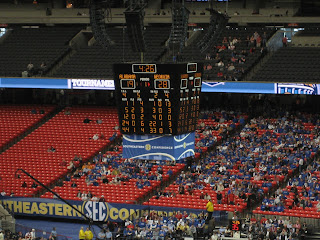 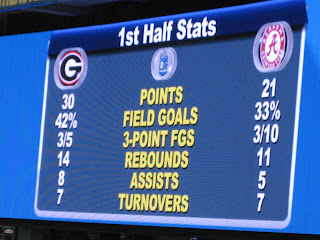 Not a good first half.

It seemed like every time we made a run Georgia had an answer. For most of the 2nd half their lead fluctuated between 6 and 10 points. We had no answer for Travis Leslie. At times, we settled for bad shots and I was afraid it was going the way of the Florida game. The difference was we continued to play solid defense this time.

I'm still not exactly sure how we came back. UGA had a 14 point lead with under 7 minutes to play. This team doesn't give up. JaMychal Green had a huge 2nd half, being aggressive in the post, making shots, and getting to the foul line. Davis had just enough 3's but didn't have a good day by any stretch. It wasn't one of Releford's better efforts. Tony Mitchell got some big time rebounds and made a couple of huge shots, including the eventual game winner in OT. Collectively, the team pulled together and found a way to win.

The full court pressure finally started working, we got to the rim, made just enough free throws, and just enough outside shots to get back into the game. We had a little luck too. Fox called a timeout with .8 seconds negating what would have been a game winning shot for the Bulldogs. 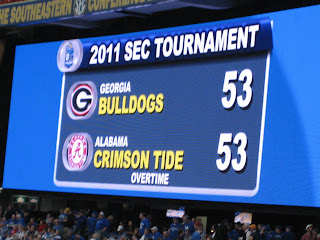 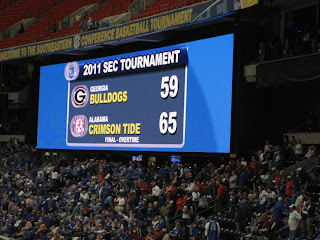 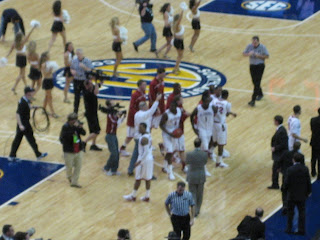 Postgame Party is on.

The Georgia Dome is an AUful facility for basketball. There are plenty of seats, but none of them are very good, as you can tell by the pics taken by my wonderful girlfriend. Even the lower level seats leave you a long distance from the floor. We had a very good following, probably slightly more than UGA, which is remarkable given their proximity to Atlanta. Still, Kentucky had more fans than both teams combined, and they did not seem to take a side. The UGA fans sitting around us were very courteous, until after the game when the guy in front of me made a smart ass remark. I responded by simply joining in with the Rammer Jammer cheer in a very loud fashion. We've had several Kentucky fans go out of there way to congratulate us on the win today. 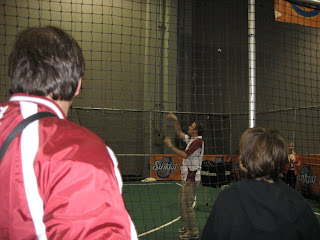 Me building a brick house at SEC Fanfare. I used to be a pretty good 3 point shooter, but this was my first shot in over 2 years. I made 3 in 30 seconds, but needed 6 to qualify for a drawing for a chance of $10,000. 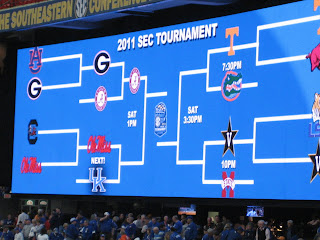 Up Next, the Kentucky Wildcats. It will have the feel of a road game, and Kentucky has been great in front of their home fans this year. Hopefully we have something left in the tank after the miraculous comeback and overtime. I still think we are on the bubble, and possibly looking at the play-in game, but a win tomorrow and we should be a lock. Tip off is set for 1pm EST, noon central. It will be televised on ABC. I will be in the Mezzanine level again.
Posted by DJC at 10:07 PM