Alabama finishes the regular season undefeated at home with a 65-57 win over UGA on Senior Day. Coach Grant started the seniors, going with Hillman over Tony Mitchell. I normally like the idea of starting the seniors in the last home game of the season, but with Georgia's size and the magnitude of this game with both teams still fighting for a possible NCAA tournament bid, I probably would have started Mitchell. 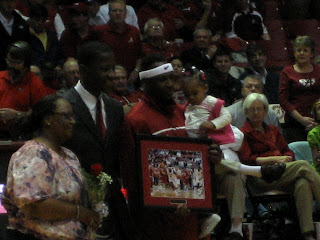 Senario and his daughter, Senario.

UGA hurt us in the post early in the game, and we had a few unforced errors that allowed the Bulldogs to take an early lead. JaMychal Green stepped up in the post in the first half to help us re take the lead. 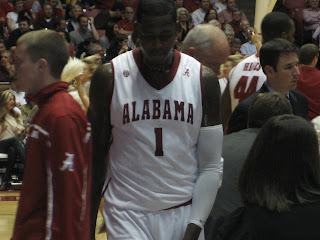 Another solid game from JaMychal Green.

Like most of our opponents lately, Georgia mostly ran a zone defense. Thankfully, Charvez Davis found his stroke from the outside which allowed us to maintain the lead throughout the game, and open up some opportunities for our post players. A great way to go out at home for Charvez. Now would be a good time for him to figure out how to do the same thing away from Coleman Coliseum. 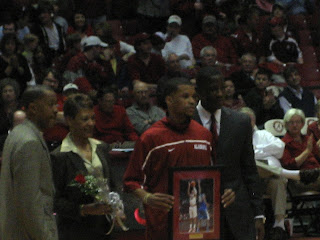 Charvez Davis made the most of senior night.

Defensively, we got back to playing Alabama basketball. We denied their passing lanes making it difficult for them to get the ball into the post. Communication was great as they tried to run Ware through screens to get him open shots. Senario, Steele, and Davis all did a great of staying with him the whole game. He was unable to get a shot off until desperation time in the final couple of minutes.

Perhaps even more impressive was the play of our bigs. Given Georgia's size advantage, and the problems we had on the boards in Gainesville, I was worried about getting out rebounded. Green, Mitchell, Hines, and even the guards, particularly Steele when he was in the game, did a great job of boxing out all night.

Hines did not have one of his better days, but it was great to see him get the standing ovation when he fouled out with 8 minutes left. He has meant a lot to this program and will certainly be missed. His 5th foul put us in a very precarious situation though, as Green was already playing with 4. It was a dumb foul, diving for a ball in the back court that he had very little chance of actually coming up with without significant contact. That's not a play you can try to make with 4 fouls and 8 minutes left. 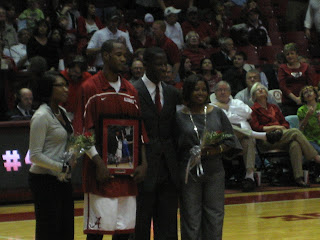 Chris Hines, before his last game (hopefully) in Coleman Coliseum.

Conversely, Green played very smart and managed to finish the game without fouling out, and was surprisingly effective in doing so. I was shocked that UGA did not pound the ball into the post every possession until he fouled out. In fairness, Coach Grant anticipated that strategy and countered by having Tony Mitchell front their high post player, making entry passes difficult. I also thought Coach Grant did a great job of managing the tempo, it would have been tempting to take the air out of the ball earlier given our foul trouble, but we were more effective running. He didn't start slowing it down until the 4 minute mark or so, which I thought was the right call. 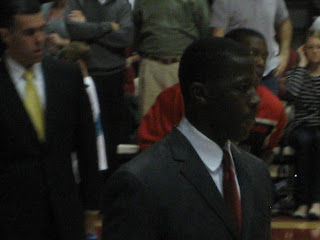 The crowd was somewhat disappointing. Despite it being a sellout, there were several empty seats among the season ticket holders and a lot of empty seats in the upper corner of the student section. Nevertheless, Coach Grant spoke to the crowd after the game and thanked the fans for their support. He said with the vision of what he wants to build at Alabama, it starts with the fan support. Going undefeated at home is a great way to start. 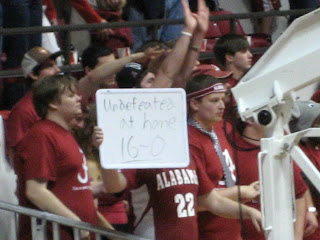 This is our house. 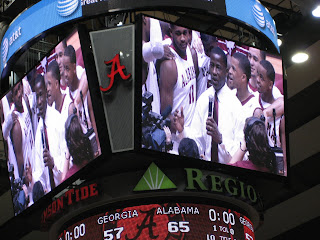 Coach Grant addresses the crowd after the win. 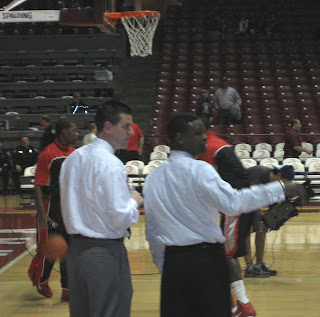 Our old friend Coach Pearson visits with Pettway before the game.

So, the regular season is over. We won 20 games, went undefeated at home, won the SEC Western Division, finished 2nd overall in the SEC, and split our SEC road games going 4-4. Not too shabby for a team with no depth that can't shoot.

Up next, the SEC tournament in Atlanta. Our first game will be Friday at 1pm EST, noon Central. We will most likely either be playing Georgia again or Vandy. Most people seem to think 1 win in the SEC tournament gets us into the big dance, but I still think we need to make a run to the championship game. Let's just go win the whole damn thing so we're not sweating it out next Sunday.
Posted by DJC at 11:47 AM