Alabama ran into a buzzsaw in the final 4 of the SEC tournament. Kentucky took the lead early and never looked back. The game wasn't even as close as the final score indicated. 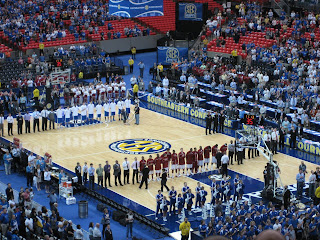 My view for the game.

I knew UK would be motivated to even the score after a close loss in Tuscaloosa early in the season. I was concerned about our energy level following a come from behind overtime win the day before. They executed, we missed some easy baskets, and the game was over not long before it started.

Tony Mitchell's injury was a key to the game. He was our leading scorer in the first half, but missed the last 5 minutes of the first half after colliding with Andrew Steele and apparently hurting his knee. He returned to the game, but UK stretched their lead from 9 to 16 in the time he was out, effectively putting the game out of reach.

Kentucky seemed to feed off the energy of the vocal Rupp Arena like crowd. They played with much more chemistry as a team than the last time we saw them in Tuscaloosa. The Cats set great screens and got plenty of open shots against our man to man defense. We switched to a zone later in the second half, but they torched that too.

Once again, we were held to only 21 points in the first half. We missed way too many high percentage shots to have a chance at winning today. I appreciate Senario Hillman's defense, but he should no longer be allowed to shoot unless it's a dunk. He's completely worthless on the offensive end. 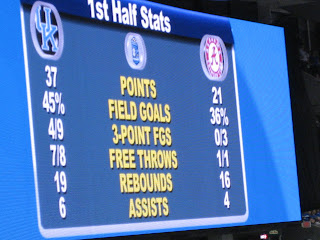 The halftime stats pretty much tell the story.

You have to give credit to Kentucky. They were better than us today. They were quicker, and they made more shots, contested or not.

After falling down 16 at halftime, we scored the first 4 points of the 2nd half. Coach Cal called a timeout and they immediately answered to retake control of the game. There was no quit in this Alabama team, but Kentucky would not let us back in the game. 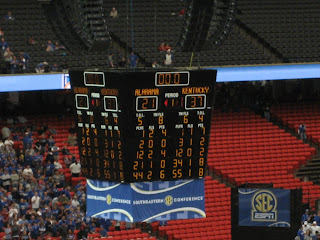 It was pretty much over by this point.

I was proud of the fact that we never gave up. We kept pressuring them and trying to force turnovers and get quick scores. Davis and Mitchell made some late desperation 3's to at least make the final margin a somewhat respectable 16, as opposed to the 20+ we trailed most of the second half.

It was a great crowd at the dome, but the UK fans had us outnumbered 20 to 1. They were loud and into the game, which actually made for a very fun atmosphere. The Kentucky fans were first class all the way. They were very nice to us and complimentary of our team despite the lopsided score. Frankly, I wish our fans were as knowledgeable, classy, and supportive of the team as they are. I will be pulling for them tomorrow.

Up next, who knows? We will find out tomorrow afternoon. In the meantime, pull against any bubble teams and any underdog teams trying to steal a bid in their conference tournament. In a few moments I will post what I hope is a comprehensive review of the arguments for and against our inclusion in the NCAA tournament. Whatever happens at 5pm tomorrow, I am damn proud of this team for what they have accomplished to date, and will support them 100% in whatever post season tournament we land.
Posted by DJC at 10:51 PM