According to Wikipedia, a Chanticleer can be anything from a rooster; a male vocal ensemble, a race of angelic humanoids, or a Navy ship. Last night, they were a badly outmanned, unathletic basketball team with a subpar, cheating coach who should probably reconsider pursuing his career in country music. 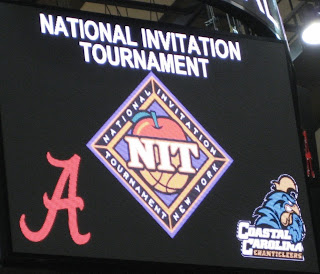 Judging by their logo, I guess it's a blue rooster.


I couldn't find anything more recent, but after listening to that, perhaps a music career is not his best option either.

I was concerned about how the team might perform after getting left out of the tournament. It's not uncommon at all to see NCAA quality teams get bounced early from the NIT. It's hard to want these games as much as your opponents who are just happy to be in the postseason. Given our recent history, we should be happy to be in the postseason, but I'm sure the team feels disappointed as we all do about barely missing an NCAA tournament bid.

I'm not going to say the team looked happy to be there, but I think they are making the best of a bad situation. We jumped out to an early lead and the game was never really in doubt. Andrew Steele did not play due to a concussion.

We pressed a lot more than we have been and also ran more after missed shots. We had a lot of opportunities to run, as the Chanticleers shot about 5 or 6 air balls in the 1st half. Senario Hillman got the start and actually went 5 for 9 from the field including a 3 pointer. Problem is, all 4 of his misses were horrible shots, and I fear his one made 3 will give him the confidence to jack up 7 or 8 in the next game. We will miss his defense next year, but it's a little late to be developing a jumpshot. If he sticks to steals and dunks, he can help us get to New York. Hillman got his 1,000th career point and is one steal away from tying the school record. 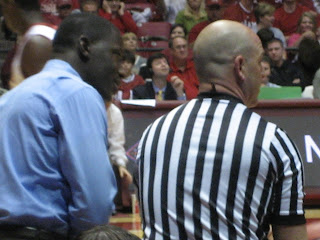 Tony Mitchell came off the bench to provide a spark including making three 3s. Green dominated their big man inside, but played a part in another double technical after getting up in a guy's grill after a dunk. A friend of mine commented that we were playing for next year, with the extra pressing and running style that Coach Grant prefers. It would also explain why younger guys like Hankerson got some quality, meaningful minutes. On the other hand, I think we knew we could run CC and their 8 slow guys out of the building easily, so it also made sense from a strategic standpoint. 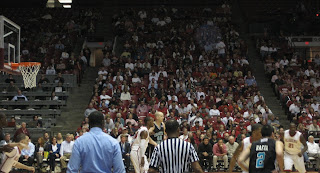 Playing defense in the first half.

At one point Ben Eblen had a fast break with no defenders near him, and Tony Mitchell trailing behind. Eblen turned and handed the ball off to Tony for the dunk. I found it somewhat humorous that he didn't even want to risk missing a layup or botching the alley oop.

The final score could have been a lot worse than it was. We switched to a zone defense and took the air out of the ball on offense with about 8 minutes left and a 25 point lead. Coach Grant called off the dogs and emptied the bench in the final minutes. Only Jason Carter did not get into the game. 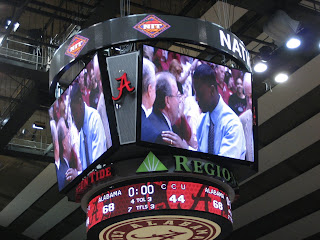 The atmosphere was actually not bad. The attendance was only 5,000, but the crowd was into the game. The general admission seating allowed people who normally aren't able to get a good seat to be closer to the court. I got there about an hour early and our normal seats were already taken, but we were able to get on the same row just 2 seats down.

It was interesting that all the advertising had been removed from the arena, we didn't dim the lights for the starting lineups, and all the championship banners had been taken down. I suppose all due to NIT rules. 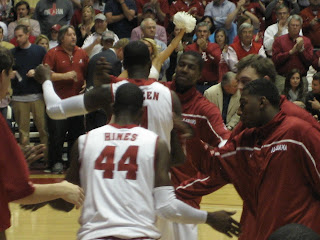 Starting lineups under the lights. Thanks again to my gf for taking the awesome pics.

Up next, we play the New Mexico Lobos who beat UTEP in the first round. New Mexico is a good team. They beat BYU twice and played other tournament teams very close. The game will either be Friday, Saturday, Sunday, or Monday. I had heard rumors that the game would be Friday, and earlier today it was listed on our official athletic website (rolltide.com) as being Friday with time TBD. They have since removed that. EDIT: I originally stated that they may schedule this for Saturday and make us play in the Pit due to gymnastics being at Coleman. I'm an idiot, gymnastics is in Birmingham Saturday so there is no reason why we won't be able to host. I will try to post something as soon as I hear the date and time..
Posted by DJC at 12:01 PM

(that was YOUR fault, dj. you were emphasizing c's in the blog title)

and your gf is doing wonderful work with the pics.

Game is Monday night, which is good for letting guys heal. And students will be back. BTW, for some reason, the crowd looked huge on TV.

Is Jason Carter still eligible for a redshirt? Is that why he didn't play in garbage time?

hoot, I wouldn't think so, because he got some minutes in the early non conference schedule. In fact, I think he even played in the final minutes of the SEC tournament game against Kentucky if I remember correctly.