Pachyderms Punish People from the Pit, 74-67 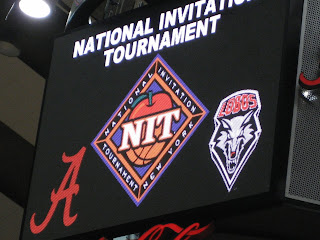 Alabama advances to the quarterfinals of the NIT with an impressive win over a good New Mexico team. It was a game of runs early on. New Mexico jumped out to a 6-0 lead. We answered by scoring the next 12. It was back and forth for most of the first half. I felt like we were playing pretty good basketball, but just couldn't pull away. 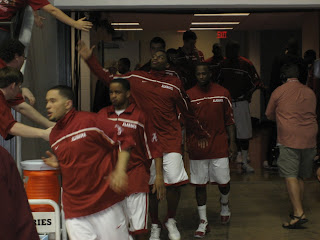 The Tide takes the floor

New Mexico's zone gave us some trouble early, until Charvez Davis busted it. Tony Mitchell had a great game, forcing steals on defense, knocking down a couple of 3s and of course a couple of spectacular dunks. The Lobos had nobody who could match up with him. There was a span of a couple of minutes in the first half when he seemed to let the officiating get into his head a little bit. I love his competitive fire, but I feel he hurts his case more than he helps it by getting into animated discussions with the officials. Same goes for Chris Hines. Just play ball guys, and let the Coach work the officials. I know that is easier said than done.

Speaking of the officials, the crowd was on them pretty hard much of the night. I felt they missed a couple of out of bounds calls that went both ways. For what it's worth, most of the "controversial" calls they made on my end of the floor, I agreed with. I thought we got the short end of the stick on some calls at the other end, but obviously they were in much better position to see those plays than I was.

JaMychal Green spent most of the evening in foul trouble. Andrew Steele did not play as he is still recovering from a concussion. Jason Carter did not dress out. Tony Mitchell, Trevor Releford, and Charvez Davis more than picked up their slack. Carl Engstrom even got a little playing time at the end of the first half in a great coaching move by Grant. With Mitchell having 2 fouls, and Green already in foul trouble, he used an offense/defense substitution, taking Mitchell out on defense to avoid picking up the 3rd foul. He used the "use it or lose it" timeout after a made shot to get the Swede into the game. In what most would consider a smart move, Alford designed his last shot play to create a one on one matchup with Engstrom. Carl played picture perfect fundamental defense, moving his feet to stay in position facing his opponent, and went straight up to block the shot. It was also good to see Hankerson get some quality minutes and help us out on defense.

Releford had another great game. He had 20 points, 6 assists, and only 2 turnovers. He was able to consistently beat his man off the dribble, especially in the 2nd half. As the game went on, the Lobos seemed to get tired and were not as active in their zone. Releford was able to penetrate it, and we were also able to get some good looks with solid ball movement from the high post. 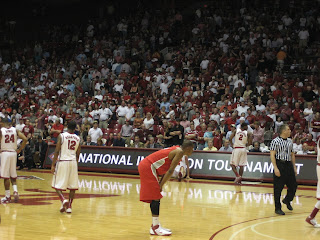 The Tide was rolling for much of the 2nd half. After Releford converted a turnover into a beautiful alley oop pass that Mitchell went up and slammed down, Coleman Coliseum was as loud as it's been all year. While the full court press did not force a ton of turnovers, I thought it wore down the Lobo players. The turnovers we did force, both in the full court and half court, usually led to points. With an 18 point lead in the 2nd half, the game was pretty much over. 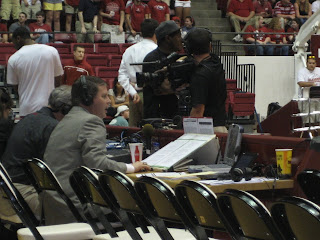 Chris Stewart calls the game. Bryan Passink was absent for some reason.

The game was not as close as the final score indicated. The only negative from last night was the God AUful free throw shooting. The combination of shooting less than 50% from the line with New Mexico making a bunch of 3s in the final two minutes, and the final score became more indicative of a close game. 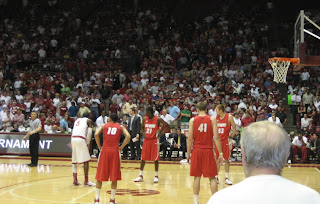 We built a brick mansion at the free throw line.

The atmosphere was great at the game. The announced crowd was 6,800, but it seemed like closer to 8,000. The General Admission seating allows more fans to sit closer to the floor who might otherwise be relegated to the rafters. They are filling seats that the people who buy season tickets only for the football points commonly leave empty. As you can tell by the pics (thanks to my wonderful gf), we were not in our usual seats, but I was lucky enough to get reserved seats on the 3rd row of the floor directly across the court. 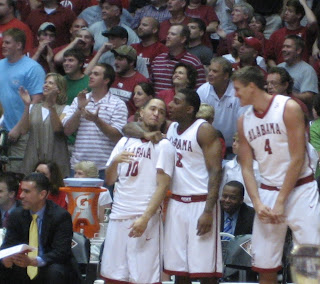 Up next, the Miami Hurricanes come to Tuscaloosa tomorrow night for the final home game of the season. If you haven't made it to an NIT game yet, do yourself a favor. Despite the smaller crowds, these last 2 games have been as fun as any this year. Tip off is set for 8pm and will be televised on ESPN2. Let's send these seniors off to New York with a perfect 19-0 record in our house.
Posted by DJC at 11:27 AM