I will keep this fairly short as Alias did a great job in his recap below. I just wanted to reiterate a couple of his points and share a few pics my gf took at the game. My apologies for the delay in posting a recap. I got home around midnight, in bed after 1 am, and have been fighting fires on various fronts all day long today. 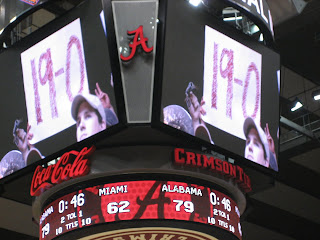 Alias is right, the crowd was awesome. They announced the attendance at 8,600, but it looked like closer to 10,000. I think it really helped us on defense, as Miami appeared to get rattled when the crowd got noisy. At times, Miami looked a lot like our teams under Gottfried did on the road. Their guards had no clue how to handle our trap.

The undefeated home record is a huge accomplishment for this team, and a key to building this program. No team will ever win more home games than this team. I spoke to a fan last night who had not been to a game since the Wimp Sanderson era. We can talk all we want about marketing, but fans have fun when the home team wins. When fans have fun, they want to come back, and invite more friends to do so. I think we are starting to see the cumulative effect of that.

I was shocked that Miami brought a solid following. They had about 100 or so fans scattered throughout, including a few loud, obnoxious, trash talking douchebags sitting a few rows behind us. Sporting backwards hats, nut dusters, and gold chains, they were stereotypical of the early 90's Miami football fans. But on this night, it wasn't about "the U." 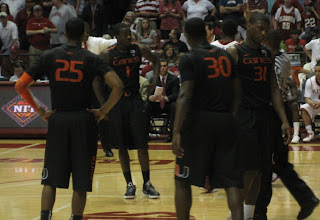 Miami's body language says it all, hands on the hips, heads hung low.

Releford got into foul trouble in the first half, and we had an unusual lineup on the court of Eblen, Hankerson, Hillman, Mitchell, and Hines. You could tell this combination had not played together much as the offensive chemistry was definitely off. Thankfully, we maintained the lead with good defense.

The seniors all had games that were representative of their UA careers. Davis played good defense and made a 3 to bust the zone. Chris Hines didn't score much, but pulled down 9 rebounds and defended the paint, doing all the little things. Most importantly, Senario Hillman was all over the court. He had a few of those poor jumpshot selections that make you scream "NO!" when you see him pulling up. He also fouled out. But despite not being able to shoot a jumpshot or a free throw, he scored 17 points by getting to the rim, getting rebounds, and creating steals that led to fast break points. He took over sole possession of the UA record for all time steals leader.


This dunk by Hillman got the place rocking and led to the big 2nd half run that put the game away.

The assistant coaches did a good job of preventing Coach Grant from getting a technical near the end of the game. Miami players generally had a bad attitude, and things were getting a bit chippy. I think the refs gave them a number of mercy calls in the final 4 minutes when it was obvious we were going to win, to try to keep things under control. 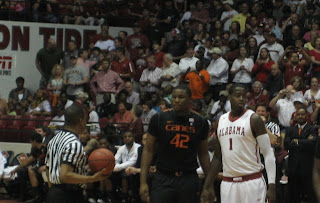 Green scored 14 points despite playing much of the game in foul trouble again. 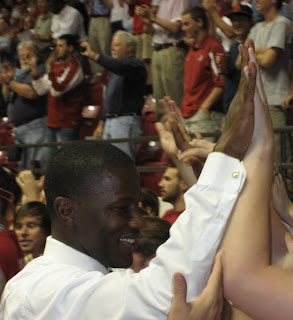 Coach Grant celebrates with appreciative fans after the game. This doesn't look like a man who is thinking about leaving anytime soon.

As most of you know, we now go to Madison Square Garden in New York for the NIT final 4. We will play Colorado Tuesday night at 9pm Eastern, 8 central on ESPN2. Colorado is perhaps the only team who has even more of a beef than us relative to the NCAA selection committee. They are a lot like us, except they are more of an offensive oriented team. This will be a tough game for us. The winner will play either Washington State or Wichita State for the NIT Championship Thursday night. 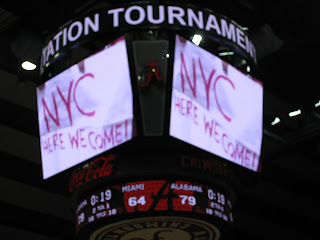 Bobbyjack and I have previously discussed the significance of the NIT, and I admit to saying in the past that it should be scrapped, but this year has changed my mind. The tournament serves its purpose for a team like Alabama who played horrible early in the season, but turned it around against all odds. This team played above their heads in SEC play, and deserved the reward of post season basketball. Instead, our spot was given to teams like UAB (who lost their play in game by 20) and Tennessee (30 point loss to Michigan first round). In the post game interviews, many players said they had never been to New York and are excited about playing in Madison Square Garden. This has been a special season, and I'm happy to see the players getting that reward.

The Garden is the world's most famous arena, and the best player to ever play the game once called it "the Mecca of basketball." I will be making my first pilgrimage there Tuesday night, and will stay for the Championship if we are fortunate enough to win. I will try to post updates from the Big Apple. RTR!
Posted by DJC at 3:17 PM

I know the NIT is a disappointment compared to the NCAA Tournament, but this has been a nice experience for this team. A trip to NYC is a nice reward for them. Hope they have a great time there. This could prove a good jump-start for next year!

Please, please tell me what a "nut-duster" is. I need something to wear to Talladega this year.

senario's performance last night was a treasure to watch. i've been harder on this guy than any player i've watched at alabama.

the standing ovations for him almost brought a tear.

i attended games in the sanderson era and i'm telling you guys attendance was better this year. the fans have taken to grant. there's a story making the rounds today about how unhappy grant is here and ut might make a play for him.

first, i think the pic of grant with the fans in this post says a lot.

two, isn't it great to have a coach other programs are pining after!

three, even if he were unhappy, (and i don't believe he is) he strikes me as being smart enough to know to stay miles away from that rotting cesspool in knoxville.

regardless, we're at the next level (albeit of the nit) now. the last three games were home games. we were supposed to win them.

i can envision the scene from hoosiers, grant measuring up msg for the team, emphasizing it's just another basketball court.

yeah, it's just the nit, but win the damn thing!

The NCAA gets a lot of flak (most of it justified), but one of their better moves in recent years has been taking over the NIT. The selection process to get into the tournament is much more difficult now than it used to be. Plus the thing I really like is they award automatic bids to conference champions who aren't awarded at-large bids to the big tournament so that those deserving teams have an opportunity to continue playing. It's made the tournament much more entertaining, as evidenced by the fact that great mid-major teams like Wichita State are in the semifinals while Kent State and Charleston made it to the quarterfinals.

I don't think those rumors are true about CAG being unhappy. Not in the know, but just reading your comments about his body language. Plus, I think the rumors were started by people who "reported" that Tom Izzo was going to be our coach 2 years ago.

Anonymous, a "nut duster" is a patch of facial hair on the chin, not attached to a moustache and not quite enough to be considered a goatee. I'm sure you will see plenty of them at Talladega.

FWIW, I personally know the person who "reported" the Izzo story a couple of years ago. At one point, he did not like Coach Grant because Coach does not give him the same access to the program that Gottfried did. He claims to be over that and behind him now, but it may explain why he may be saying stuff about Grant being unhappy.

The Crimson Tide is certainly making the most of their participation in the NIT.

At this point Alabama is getting a LOT of national exposure.. much more than UAB or Georgia ! Game by Game, Alabama has become an "ESPN-Regular".

The team continues to develop and utilizes the additional practice time that the "one-and-done" teams of the NCAA Tournament don't have. Most importantly, the team's freshmen players are certainly benefiting with these games.

The third advantage of being in the NIT, is the luxury of hosting the 3 home-games, which availed Alabama a precious opportunity in its recruitment of its future superstar recruits.

And I really appreciate all of you who attend the Games in Coleman Coliseum because you contributed to the achievement of a Perfect Homecourt Season. Hearing the crowd erupt and go crazy for the Crimson Tide on ESPN-2 and on the Radio sends adrenaline through me, even while I am 160 miles from Tuscaloosa.

Don't forget to go out to the Gymnastics, Softball, Baseball, Tennis Matches and Games (especially against SEC competition which is usually nationally ranked!) and the Alabama Relays too!

Those road uniforms worn by the Miami team were not really eye-catching outfits. I hope Alabama never wears anything like that. NEVER !