From the Sunday Huntsville Times.... 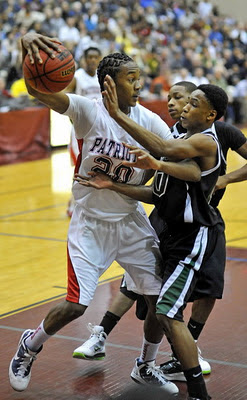 Seeing as if 2 of Alabama's incoming freshmen are from the Huntsville area, I thought I would post this link from The Times' Mark McCarter discussing some of the top incoming SEC freshmen for the upcoming season.

So, what of the potential impact at Alabama from Trevor Lacey and Levi Randolph?

"They've got to help us quickly," says teammate JaMychal Green. "They've got to be ready now. They're going to have a lot of playing time this year."

Green says that both are "great shooters, and they both have IQs of the game."

Of Randolph, Alabama coach Anthony Grant says, "Levi has come in and done a very good job. We're excited about the potential. Levi brings versatility to the perimeter for us. He's a guy that can play multiple positions and provides a skill and talent level that can help us."

Lacey's adjustment has been slightly delayed after minor knee surgery in June, though after rehab "we've got him in a good place right now," Grant says.

Expectations for Lacey are "No. 1, to make the adjustment from high school to college. No. 2, to get acclimated to a new system and a new style of play," Grant says. "One of the things about Trevor being as highly touted as he was is going to understand that adjustment and what it'll take."

Hville, good to hear from you buddy. You've been almost as absent from this site as I have. Let us hear a lot more from you as the season progresses.

P.S. Thanks for the updated.

Thanks for sharing such fantastic Blog,well ! Basketball is a very familiar sport that is being played all over the world. To play basketball first learns the rule of the game. Bestbasketballmall is the Exclusive website for NBA or National Basketball Association.
http://www.bestbasketballmall.com/