Last year we had to come from behind and play 2 overtimes to beat these guys. Both teams have improved a lot since then. This time, we jumped out to an early lead and held on for the win in a game that we just couldn't put away.

First of all, let me say that there is no shame in playing a close game with UAH. They are a class program with a great coach in Lennie Acuff. They are experienced, have 3 Division 2 All Americans, and are picked to finish 2nd in Division 2. They would beat a lot of D1 teams, and I wish them luck on the rest of their season. 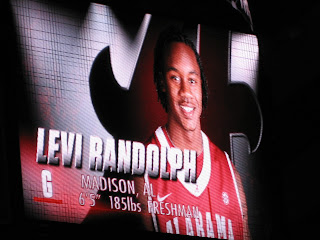 The starting lineup was 1. Releford. 2. Rodney Cooper 3. Levi Randolph 4. Tony Mitchell 5. JaMychal Green. I was somewhat surprised to see 2 freshman in the starting lineup. Cooper had a great game, but Levi struggled. Cooper will be a major asset to us this year. Levi has a lot of athletic ability and played good defense in the press, but his shot was off and he needs to bulk up if he's going to be able to play defense in the half court, both in the post and fighting through screens. We were able to force them to play a full court game early on and our pressure seemed to bother their guards. The defense was smothering and Cooper made a couple of 3's as we jumped out to an early 12 point lead. 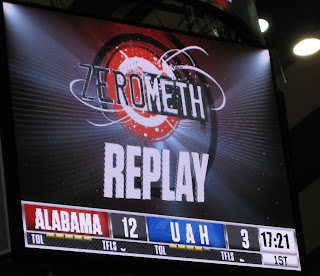 As a side note, I don't understand why Zerometh continues to waste money on advertising. I used to represent some meth heads, and college basketball is usually not a priority for those folks, but I digress.


We led by as much as 14 in the first half but UAH made timely shots to keep the game within reach, and they had a chance to tie it within the final 3 minutes of the game. JaMychal Green was clearly the MVP. It is obvious that playing with team USA over the offseason has improved his game. He really is a complete player now, and his improved range gives us a lot more scoring potential on offense. He did pick up one technical foul after a dunk, but it was not clear what he did. I can only assume he said something, as it was not evident at the game.

As expected, outside of JaMychal, we have some major problems in the post. Carl got into early foul trouble and did not play much. Nick Jacobs is not any better of an option than Engstrom at this point. If Green gets into foul trouble, we will be in trouble. We are better off going small at this point.

When either Carl or Jacobs were in the game, we were not able to press. We actually ran a lot of 1-1-3 zone. I liked this, as we were more aggressive and active in it than we have been in the 2-3 in the past. It allows for some trapping on the wings and in the corners, which we were able to force a few turnovers and disrupt their offense.

Given our size limitations, Tony Mitchell is going to have to play the 4 position some which is frankly not in his best individual interests. He is willing and capable of doing so though, and it will be interesting to see how Coach Grant strikes a balance between allowing him to play on the wings and using him to bang inside. He had a solid game and made a few explosive plays on both ends as normal. He also nearly lost his temper a few times when calls did not go his way. It was good to see Trevor Lacey calming him down, but a freshman should not have to be the voice of reason to a veteran. I think Tony hurts himself with the officials with his reactions when things do not go his way. 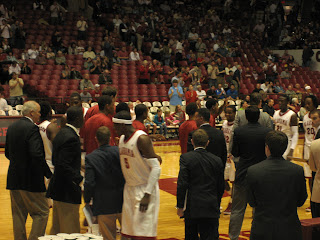 I was surprised that Retin Obasohan (admittedly, I had to check the roster to verify that spelling) did not play more. Ben Eblen had an AUful night at backup PG. He officially had 2 turnovers, and was at least indirectly responsible for more. The first 3 possessions he was in the game, #2 for UAH beat him off the dribble to put up 6 straight points. He either needs to at least get back to being the Ben Eblen that played in the NIT tournament last year, or we will be in trouble at backup PG. I would like to have seen what Retin could do.

It's obvious that Trevor Lacey is going to be a great player for us. He makes great decisions and can score in a variety of ways, although his shots just weren't falling last night. I think his knee may still be bothering him some, as his lateral movement when playing on ball defense looked a little sluggish.

Charles Hankerson played a good game and knocked down some perimeter shots. He either gets nothing but net or nothing at all. I would not be surprised to see him start over Levi in the next game. 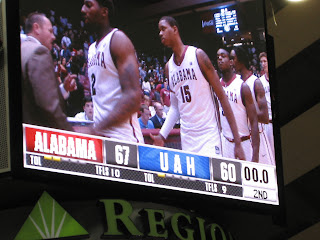 UAH made a late run, thanks in part because we kept fouling their 3 point shooters. Our wing guys need to do a better job of not leaving their feet on the head fakes out on the perimeter. Nevertheless, we got the stops when we had to, and made 8 of 10 from the free throw line to take care of business. I think this early test and win will be beneficial down the road.


This team will only get better. We missed some fast break opportunities due to poor spacing and bad passing decisions that will only improve with chemistry as the guys get used to playing together. 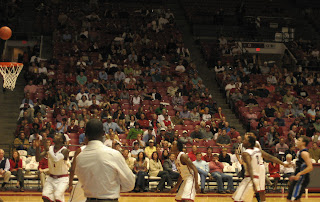 The crowd was as good as I can ever remember it being for an exhibition game. I would estimate over 5,000. UAH brought their cheerleaders and a few bus loads of very vocal and supportive fans. They should be proud of their team's effort, and I hope they bring the Division 2 National Championship to the UA system.

Thanks to my gf Brandi for taking the pics, and also thanks again for my wonderful gift pictured below: 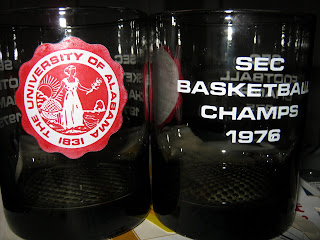 I hope you don't mind me sharing it here. We were not around then, but I know many regard the 1976 team as one of our best ever, so I thought some of the readers here may appreciate it.

Up next, a game that actually counts against the North Florida Ospreys, Friday at 7pm at Coleman Coliseum. Be there.
Posted by DJC at 7:47 PM

Your report is very much appreciated. I am excited about this season in a way I haven't been in many, many years.

Very insightful analysis, much appreciated. I was around for the 70-74 seasons, great time for Bama and built a strong foundation for 76 tea.

Appreciate your posts. You actually had a picture of me on here last year as I am in Chaos. Roll Tide