This game was a bit of struggle. VCU is a decent team and they played very hard and determined. This was a game that I was concerned about due to a number of factors, but the team showed good character and battled through adversity to get the win. Releford had a lot of problems with the press in the first half. A couple of times he was already in the front court while our wings and forwards were getting trapped with the ball in the back court. Other times his teammates did not come back to the ball against the double-team. Eblen came in for a few minutes and handled the ball well and actually scored a basket! 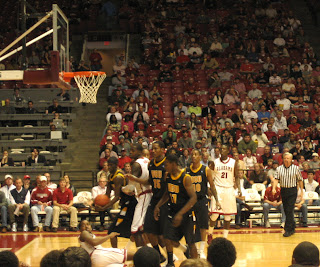 The first half was somewhat ugly. As I mentioned, the VCU press gave us some problems. We were also caught out of position several times and committed a lot of fouls. VCU ran a very uptempo offense to prevent our defense from getting set up. They simply out ran us down the court, at least twice after made baskets. Despite all of that, we were still only down 1 at halftime.

I do not think Tony Mitchell was fully healthy. He limped off the court at one point in the first half, appearing to have aggravated his ankle, but he was able to return. While he still had a solid game with 13 points (despite going only 6 of 10 from the line), he did not appear as quick and explosive as usual. There were a couple of missed alley oop attempts that I think he normally brings down over the VCU defenders. 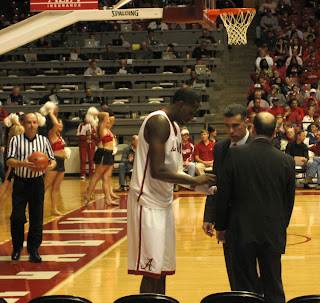 The great thing about this team is we have multiple weapons. Even though Tony wasn't 100%, JaMychal more than made up for it with his play. Green was a little banged up himself, and at one point he went to the locker room after apparently hurting his elbow that he hyperextended a couple of games ago. He came back out shortly thereafter and absolutely dominated the game at both ends. 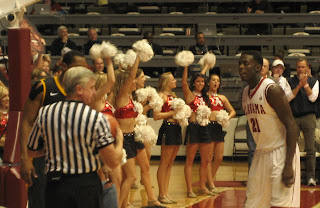 The scrappy Rams led by as much as 6 in the 2nd half. I was surprised we ran as much zone defense, given that VCU did not really have any size to speak of. I wonder how much of that was due to the fact that we were a little banged up. At any rate, VCU finally started making some 3's which allowed them to build the lead. When we switched to man to man down the stretch, we pretty much such them down. 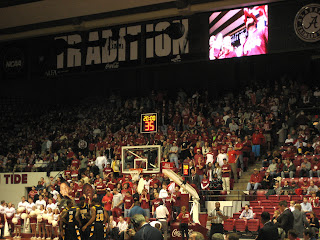 Once again the freshmen stepped up big time. Nick Jacobs development over the first few weeks of the season has been amazing. He scored 6 points and played 15 minutes last night, as opposed to only 3 minutes for Carl Engstrom. I expect that trend to continue as Jacobs is playing like an SEC caliber contributor right now. Trevor Lacey made some clutch plays at both ends of the court down the stretch to preserve the victory. 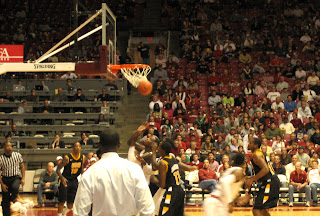 We also saw some of our weaknesses tonight. VCU got way too many offensive rebounds when we were in the zone. We only shot 1 for 11 from 3 point range. While we have multiple guys who CAN shoot the ball, perimeter shooting will still be an issue at times this year. We don't have that one Rotnei Clark guy who will make it virutally every time he's left open. 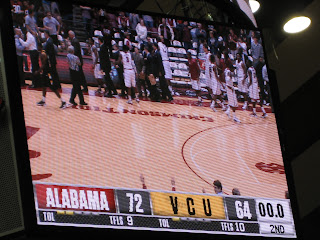 The home winning streak remains in tact. I thought the crowd was fairly decent, considering it was an 8:30pm tipoff on the Sunday after Thanksgiving/Iron Bowl with bad weather and traffic issues all over the state. The student section was at least half full, and I would estimate the total to be around 8,000 or so. VCU brought a fair number of vocal supporters. Former players Mo Williams, Rod Grizzard, and Reggie Rambo were all in attendance. The crowd was very much into the game and made some noise during our 2nd half run which may have given the players a little boost. I regret that I didn't get a chance to meet up with Hville and Alias, but hopefully next time.

Up next, the Georgetown Hoyas from the Big East come to Tuscaloosa for another late 8:30pm tipoff Thursday night. This is another great chance to showcase our team on national television, so let's pack the house!
Posted by DJC at 11:26 AM

I got to work late, having driven back this morning after attending last night's game with H'ville. We wondered whehter Releford might not have been under the weather too, because he did not seem to want the ball even before picking up his early second and third fouls.

The outside shooting was abysmal. The continued improving play of Cooper, Randolph and Jacobs seems to promise great things for the future, likely even this season. Lacey did not have his outside shot last night, but he made a valuable and substantial contribution on both ends of the court. (Contrary to pre-season hype, Lacey does not look to me like a one-and-done type of player.

Last night was an exciting first pilgrimage of the season for both H'ville and me. It is impossible for me to post anything after an 8:30 tip off. If we beat Georgetown like that Thursday, however, I just might do without an extra hour's sleep just to get something on the record before that plagiarizing DJC does. ;-)

If we stay healthy I think we can get a 3 or 4 seed this year in the Big Dance.

The way we play defense, we can hang with anyone in the country. Unlike last year we have some shooters, however we still don't have a CONSISTENT deep threat.

Can we get Emmett Thomas or Rod Grizzard back?

Does Gueye sit on the bench or in the stands?

Thx for the link fb... gonna be interesting to hear the crowd reaction if he is announced in attendance.

Gueye sits on the bench in street clothes.