Every team needs a few cupcakes on the schedule, and this was a good time for Alabama to play one. AAMU should drop the "M" from their name, because they might be competitive at the AAU level. The 5 writers on this blog could probably give them a good game. Okay, obviously I am exaggerating a bit, but you get the point, they are not a very good team. 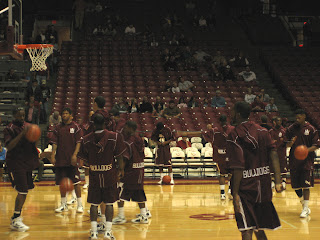 Hoodies for warmups? It's good to know they are prepared in case they have to play in a really cold gym. 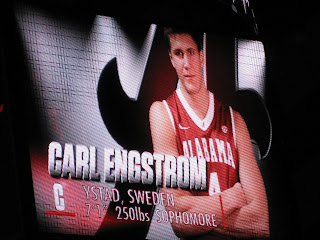 Alabama jumped out to a 19-2 lead and never looked back. AAMU was completely hopeless against our defense. This despite JaMychal Green not playing at all with a hip pointer. He was dressed out and could have played if needed. Carl Engstrom got the start instead and performed well. Nick Jacobs came off the bench and scored 15 points and pulled down 10 rebounds, it is amazing how much he has improved. 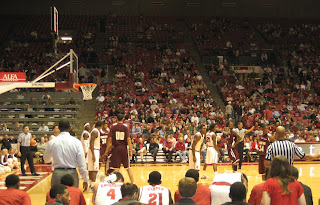 The Bulldogs got their first field goal with less than 4 minutes to play in the first half. That would be the ONLY fg they would score from the field in the first half. The officials kept the game somewhat respectable by calling EVERYTHING on us, which I can understand, it's good game management to let the hopeless team get the benefit of most of the calls. 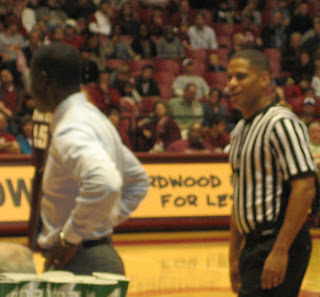 Despite the incredible defensive effort, and a 48-20 halftime lead, the mood in the Coliseum felt more like we had a 20 point defecit. That's because about 8 minutes into the game Tony Mitchell went down with an apparent leg injury. Initially, all signs looked very bad. I did not see how it happened, but it was on the other end and side of the court from me and appeared to be during a dead ball and without contact. He was obviously in agonizing pain and stayed down for several minutes. Of course, my first thought/fear was knee ligaments. He did not put any weight on it and was carried straight to the locker room. 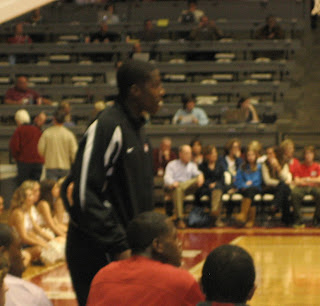 A little later on, the team trainer came out, without Tony, and went straight to Coach Grant. I watched that conversation very closely trying to read Coach's reaction, which was neither positive nor negative. Not long thereafter, I spotted the team surgeon speaking with the trainers, never a good sign. I had a hard time focusing on the action, as I was spending a lot of time trying to get information on the injury. Word got around that it was an ankle rather than a knee, and there was a rumor that somebody saw him grab the back of his foot initially, which led to fear of an achilles injury. About midway through the 2nd half, Tony returned, on crutches. He was able to limp into the team huddle during timeouts without crutches, and was putting some weight on it when he left the floor. He seemed to be in good spirits, and reports are that it is a severely sprained ankle. I expect him to miss a few games, but it doesn't look like the disaster we all feared. 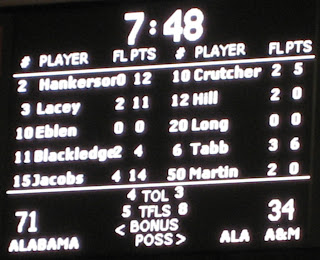 The 2nd half was very ho-hum. We called off the dogs and ran a 2-3 zone for most of the 2nd half. Keon Blackledge got a lot of playing time, in part due to Tony's injury and in part because we were cruising to an easy win. AAMU got more aggressive in the 2nd half, and they were the ones picking up the fouls. Hankerson had a very good game and was the leading scorer with 16 points. All of the freshman continued to play well. Levi's shot was off, but his defense was dominant as always. 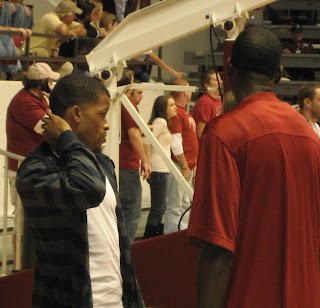 The crowd was better than I expected. Student turnout was poor, which is understandable, but there was not a noticeable drop in the rest of the arena. Probably at least 6,000 or so were on hand, including former player Charvez Davis. It's good to see former players still supporting their teammates and the program. 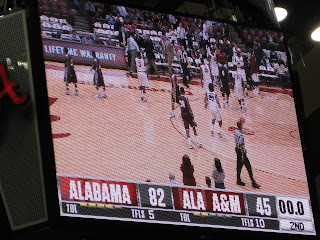 Up next, Coach Grant's former employer and last year final four participant, the VCU Rams come to Tuscaloosa for an 8:30 pm CST tipoff Sunday night. Once again, VCU has one of the best up and coming coaches in basketball. With Tony Mitchell likely out, the 23 home game winning streak will certainly be on the line. Hopefully the late start will give students a chance to get back on campus. Let's pack the house and get number 24 in a row on national television to keep the momentum going.
Posted by DJC at 11:32 AM

Thanks for the report!