After 2 straight losses, Coach Grant decided to make a change in the starting lineup.  I posted after the Dayton game that Trevor Lacey should start over Rodney Cooper.  Instead, it was Nick Jacobs who replaced Cooper in the lineup. 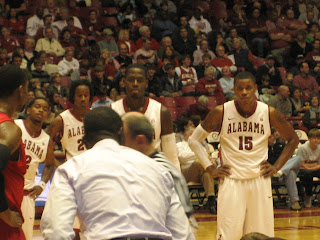 It proved to be a wise move as Alabama jumped out to a huge early lead.  This lineup has two major advantages: first, it allows Tony Mitchell to play his natural 3 position, and second, it takes a lot of pressure off of JaMychal Green inside.  Nick Jacobs has really stepped up as a freshman.  He gives us another much needed scoring option on offense.  He still needs to work on his defense, especially in the man to man, and his rebounding, but he will get there. 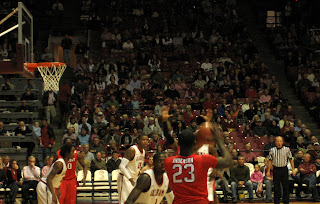 The team seemed to have a renewed focus on defense after the Dayton debacle.  We forced a number of turnovers that turned into transition baskets.  While we still had trouble in the half court sets, I thought we did a better job of attacking the zone in the first half.  We were able to get the ball to the short corners and get Tony and JaMychal some good looks inside.  Unfortunately, our 3 point shooting continues to be abysmal. 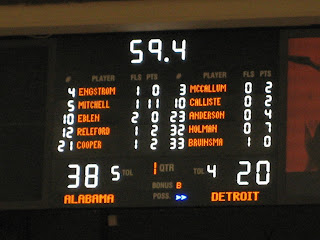 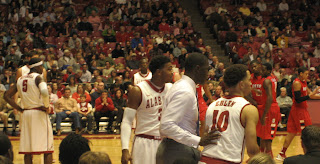 We had stretched the lead to 22 with about 2 minutes remaining in the 1st half, but Detroit closed on a 6-0 run, thanks in large part to some inexplicable substitutions.  If anybody can explain what in the hell we are trying to accomplish with this lineup, I would love to hear it.  First of all, as I have said before, Eblen and Engstrom should never be on the floor at the same time, unless they are 2 of only 5 players available.  For a team that is having such a hard time scoring, we cannot afford to play 3 on 5 on the offensive end.  Furthermore, Eblen should never be in at the 2 guard.  His role on this team is to take care of the ball and play defense while giving Releford a rest.  With this lineup, we have 3 players playing out of position, and 2 that bring nothing to table offensively. 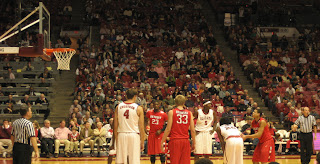 Detroit at the free throw line was a common sight last night.  They scored nearly half of their points from the charity stripe.  In fairness, most of the calls against us were good calls.  We hand check and foul a lot.  That is a side effect of having a tough, physical defense and running a lot of pressing and trapping sets.  I did feel like the officials let a lot of stuff go for Detroit, either because of the score of the game or not wanting to give JaMychal or Tony any breaks. 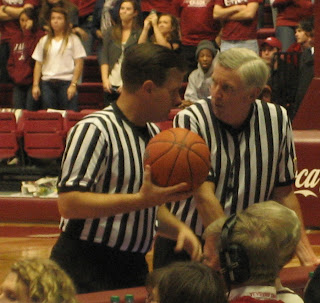 In the second half, our offense went stagnant and Detroit was able to chip away at the lead by making free throws and getting second chance points.  Our rebounding was not very good this game.  They cut the lead to 9, but we were able to force a couple of turnovers that led to Tony Mitchell dunks to regain the momentum. 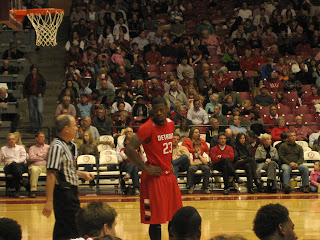 This guy picked up a technical foul in the 2nd half to help our cause.  I'm still not sure what he did.
Releford had a better game, but he still does not look like the same player from last year.  He seems a half of a step slower to me.  He was rejected a couple of times trying to beat his man off the dribble on plays that I feel certain he would have finished last season.  I have heard rumors that he had an off season leg injury of some sort, but I do not know that to be true or the extent.  It certainly seems plausible watching him play. 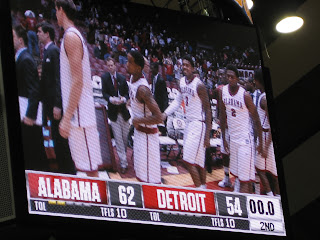 It is always good to pick up a W, and maybe this will be the start of another nice home winning streak.  The crowd was pathetic, probably only around 5,000 or so.  It was the lamest atmosphere we have had at Coleman in a long time.  The fans were not into the game at all, with the only exception being after a couple of Tony's dunks in the 2nd half.  The student section was less than 25% full, and the people sitting behind me chatted nonstop throughout the game and seemed completely oblivious to the fact that a basketball game was being played, and others were interested in watching it.  Also, whoever is in charge of playing the music for the dance team should be looking for another job.  For at least the second time this season, the dance team came out and the wrong music was being played, so they just stood there, completely still, for the 2 minutes or so while we continued to play the wrong song.
Up next, we travel to Kansas City, MO to take on the Kansas State Wildcats Saturday at 9 pm.  While it is technically a neutral site game, it will undoubtedly feel more like a road environment at the Sprint Center.  Frank Martin's teams have a tough defensive style similar to us, and their only loss so far was in double overtime to West Virginia, so we will have to bring our A game.  We will be making the trip, so I will try to post an update as time and internet connections allow.
Posted by DJC at 11:51 AM

Some data from the Detroit Game:

His Rate: 2.25 minutes of playing-time per Foul. For him to be able to play all 40 minutes before fouling out, we would have to change the rules for maximum fouls in a game from 5 to 18 !

His rate: 1 minute of playing-time per Foul. He would hope for the NCAA to change maximum Fouls from 5 to 40 !

HA. I was about to post season stats for those 2.