Coach Grant decided to give JaMychal Green a little more rest against a 2-9 Jacksonville team.  Trevor Lacey started again in his place.  Much like Oklahoma State, Jacksonville did not really have anybody well suited to take advantage of his absence.  We did miss his rebounding, especially in the first half. 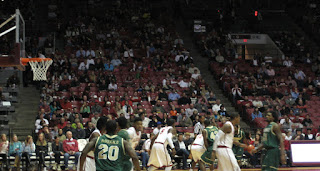 We started out in a man to man defense, but we did not play with a lot of intensity in the first half.  The Dolphins came out with a lot of energy and out hustled us for the first 15 minutes or so.  We did a poor job of fighting through and communicating on their screens, many of which were of questionable legality in my opinion.

I was most disappointed with our rebounding efforts in the first half.  Normally, we are a good rebounding team in the man to man but struggle in the zone.  This game was the complete opposite.  When we switched to the 2-3 zone with a little full court and half court trap mixed in, we pretty much shut them down and held them to one shot per possession.

After only leading by 5 at halftime, we held them scoreless for the first 8 minutes of the 2nd half to put the game away.  I am guessing Coach Grant was not happy with the defensive intensity and let the players know about it during the break.  Give credit to Jacksonville for playing hard and hanging tough for a half, they just didn't have the talent or depth to stay competitive. 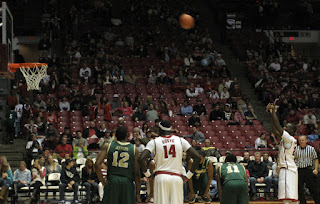 Another bright spot was the re-emergence of Rodney Cooper.  He air balled another 3, but did not let that affect the rest of his game.  He played good defense, grabbed some rebounds, and was aggressive with the basketball, getting to the free throw line and knocking down 5 of 7.  If he can continue to give us some production off the bench, that would be helpful.  It would be great if Hankerson could provide similar production from time to time. 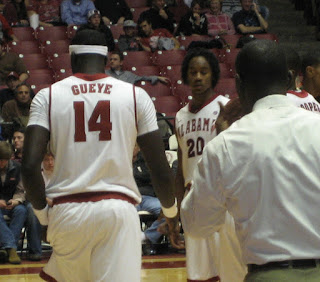 The big news of the night was the first appearance of Moussa Gueye.  The crowd was buzzing before the game as people noticed that he was dressed out.  He finally entered the game with about 4 minutes remaining.  With two 7 footers on the team, it is natural to want to compare them.  Much like Carl, the first time he came into the game the coaches had to walk him over to the table and show him where to check in. He is a totally different player from Carl Engstrom though.  The first thing I noticed, he is MUCH more aggressive and physical. 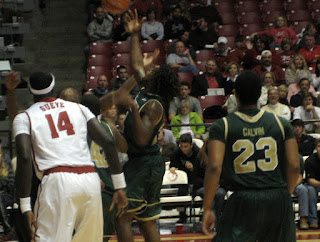 He manhandled the Jacksonville defenders under the basket, and really got under their skin.  I thought one of the Dolphins was going to end up throwing a punch at him at one point.  He is still clearly favoring his knee, which is not surprising.  I was most impressed with his strength, and he's clearly more athletic than Carl.  On the negative side,  his hands were not very good, he dropped a couple of sure rebounds and failed to catch a pass.  One time he caught the ball in great position on the low block, but instead of going up with it he tried to make a difficult interior pass to a cutter and turned the ball over.  I am hoping the issues with his hands and decision making are due to rust from not playing in nearly 2 years.  He certainly has all the tools to be a beast.  I can't wait to see what he can do fully healthy. 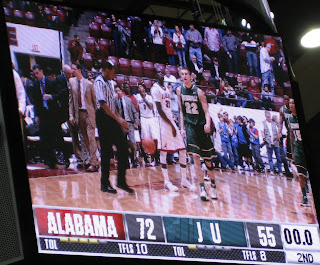 Considering it was an 8pm tipoff during the holiday season without students on campus, I thought the crowd was pretty solid.  I would guess probably 7,000 or so.  Coach Grant was very appreciative of the support in his post game comments.  We had the most lame halftime show since we had to watch 2 guys eat a chicken sandwich.  It was a bunch of small kids "dribbling" (and I use that term as loosely as imaginable) basketballs to children's music.  In the past they have had a similar act where the kids did a lot of tricks, running around, dribbling 2 balls at the same time, going between their legs and behind the back, etc.  That was pretty entertaining.  This group, however, just stood in one place the whole time and basically alternated between bouncing the ball and rolling it back and forth on the floor.

Up next, our last non-conference game of the year as we travel to Phillips Arena in Atlanta, GA for a 9 pm EST (8 Central) tipoff with the Georgia Tech Yellow Jackets from the ACC.  This is a true away game, in that Tech is playing half of their home games in Phillips this year due to renovations at their on campus arena.  I'm looking forward to going to the game with Bobbyjack.  Until then, Happy New Year!