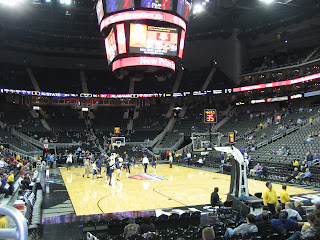 My view for the game.

We aren't a very good team right now.  This will be short, as you can look at any of the recaps over the last 2 weeks and get the general idea for how this game went.  Once again, our offense was abysmal, our substitution patterns were incomprehensible, and we got our ass kicked. 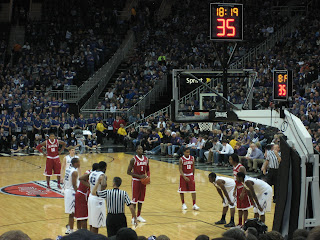 Things were going fairly well early.  We weren't scoring, but they were scoring even less, missing free throws and open jump shots that we were giving them by design.  We had a 7 point lead at one point, but our inability to create anything offense had us doomed from the start. 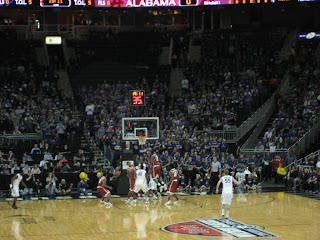 I know people are tired of hearing me bitch about this, but our substitution patterns have got to change. Eblen once again played way too much, and the vast majority of his minutes were at the 2 position.  In doing so, we turned a 7 point 1st half lead into a halftime deficit, and a 2nd half 7 point deficit into a 16 point hole.

Nick Jacobs started again and picked up the fouls that Green usually gets.  Releford played well in the first half but tried to force too much at times and had some costly turnovers.  K-State had the athletes to match up with Tony Mitchell, and while he had a couple of thunderous dunks, they were mostly inconsequential and after the game had been decided.  We were outplayed and out coached tonight, by a team with equal AT BEST talent. 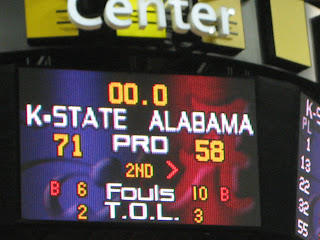 We are overrated, and until we figure out the rotation and get some form of an outside shot, we will have a very difficult time beating decent teams.

The arena was very nice, it had an NBA feel to it except for the seats being very cramped as our section seemed to consist of temporary seating that was admittedly well blended into the rest of the arena.  They had a good crowd, it was a large arena and probably about 85% full, the only empty seats being in the upper part of the lower level behind the opposite basket.  There were probably about 100 or so Alabama fans scattered throughout.  Frankly, I was disappointed with the K-State fans based on past experiences with fans of Big 12 teams.  We had a few people who went out of their way to be nice to us before and after the game, but we also endured many assclowns sitting behind us who talked trash the whole game.  I'm no saint by any means, but repeatedly dropping "F Bombs" and calling us a "P*** (other word for vagina) basketball team, is uncalled for. Not to mention the homophobic slurs.  Also, they are worse than Kentucky fans in their perception of the officiating. Apparently, the game was called uneven in our favor,even though over half of the fouls called went against us.  This seems to be a common theme amongst little brother, agricultural schools (see Mississippi State and auburn).  Screw the RPI ratings, I look forward to seeing Kansas beat their ass.  Rock Chalk Jayhawk!

Up Next, another Big 12 little brother comes to Birmingham for a neutral site game that should favor us as far as crowd support goes.  The Oklahoma State Cowboys, still butt hurt over not being selected for the BCS National Championship game in football because they couldn't beat lowly Iowa State, will come to the BJCC for a Wednesday night for an 8pm tipoff, highly motivated.  If we don't get our head out of our ass, it could be another loss.
Posted by DJC at 1:18 AM

The regression of this team since Puerto Rico is astounding. I certainly don't want to hit the panic button yet, but the rest of the non-conference schedule seems like must-wins at this point.

While I think Releford has been highly inconsistent this season, JaMychal and Tony have done about as much as we can ask of them. The freshmen simply haven't performed to the level we expected on the offensive end. Perhaps we should have seen this coming with so many freshmen having to log major minutes, but after the performance in Puerto Rico it was easy to forget about that.

I agree, the coaching staff must settle on a rotation asap. As soon as Engstrom entered the game, my first thought was that K-State was about to go on a run. At that point Bama led 17-12/17-14 and, sure enough, K-State went on a run. I'm sure the kid is working hard to improve, but he simply brings nothing to the table right now and it boggles my mind that he continues to log minutes. Eblen I can stand...as long as he's spelling Releford. What Grant is looking for by having both Eblen and Releford on the floor together is one of the great mysteries of our time.

I'm not sure the best way to improve the offensive issues, but something has to be done. We fell behind by 7 points tonight and it felt like an insurmountable deficit, which it proved to be.

I wonder if the team is expending so much energy on the defensive end that it's affecting the offense? I know Grant wants to play 94 feet of defense, but perhaps he should consider dialing back the pressure a little bit to see if that helps even out the intensity on both ends. They didn't press as much last year and they were still one of the top defensive teams in the country. I think it's asking a lot physically of freshmen to play intensely on the defensive end for 35 seconds and then come down and be able to make a jump shot.

Say what you will about the K-State fans but at least they packed the "neutral" site. Something tells me the BJCC won't look the same when OSU comes to town.

Again I don't want to hit the panic button, but I think Grant and his coaches need to huddle up and make some changes before this thing gets out of control. This team looks very bad right now and if improvements aren't made fast, we're looking at a very disappointing season.

I will always be a fan, but I may lose enthusiasm if improvement isn't forthcoming. A this point, going to Wednesday's game feels more like an obligation than fun.