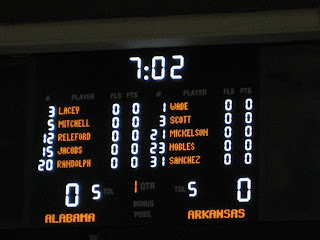 After a 4 game losing streak, there was a lot of speculation about possible changes in the lineup.  I was a little surprised it was JaMychal Green who lost his starting spot for this game rather than Tony Mitchell, but Nick Jacobs came in and played and excellent game. Green played 27 minutes and had an excellent second half after struggling in the first half. 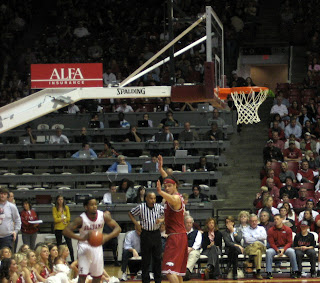 This was an interesting matchup from a style of play perspective.  Both teams like to press, but oddly we seem to prefer a slower placed game, whereas Arkansas wants to get up the court quickly on offense and get a shot up before you can get set on defense.  I actually expected a game played to their pace to work in our favor, as our offense is atrocious in the half court against the zone. 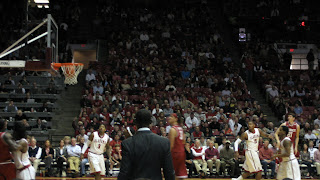 Things did not look good early on.  We were sloppy against their press with multiple turnovers.  We played a zone to try to slow down their offense, but they were effective in shooting over it.  Arkansas built a 5 point lead.

Once again, Andrew Steele was the calming factor.  We made some adjustments and Releford and Steele did a great job of beating the press and getting us some open looks.  We were able to take a 5 point lead into the half. 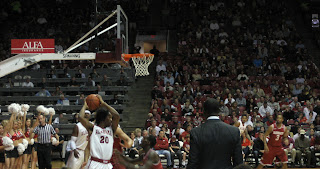 Arkansas made some adjustments and were able to retake the lead about halfway through the second half.  While they still pressed a good bit, they figured out that they were not going to force Releford and Steele into many turnovers.  They started taking fewer gambles and sitting back in the zone.  Once again, we couldn't shoot them out of it, going an abysmal 2 for 15 from three point range.  We were able to get the win thanks to Steele and Releford's penetrating the zone, and Green's post play in the 2nd half.  Releford had 18 points and Steele a career high 11.  Good things happen when we put the ball on the floor and drive, as opposed to trying to pass and reverse the ball around the perimeter looking for an open shot or entry pass to the low post.  When Releford and Steele weren't scoring from the field, their drive and dish game was getting us to the line.  We made 20 of 25 from the charity stripe. 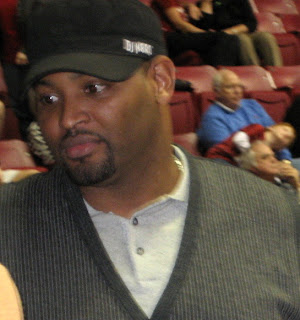 Robert Horry was in the house.  Unlike Big Shot Bob, this team does not have a knack for closing out a win.  We had chances to put the Hogs away but failed to do so.  Tony Mitchell played a little better than he has been, but he did a number of things that drove me crazy.  In the first half, against a full court press after an Arkansas made basket, he nonchalantly stood in one spot, despite being free to run the baseline, holding the ball with one hand and nearly got a 5 second count.  At one point in the 2nd half he let a pass hit him in the face, nearly turning it over and getting us out of the flow of our offense, primarily because he was too busy trying to come up with cute and creative ways to wear his headband.  Later, we had a 7 point lead with 2 minutes left, a chance to put the game away, but Arkansas makes a 3 then Tony turns it over right under our own basket giving them a quick 5-0 run to cut it to 2.  At the other end, he was fouled going for a dunk and immediately got into the Arkansas player's grill.  The ref quickly intervened and thankfully did not give him what would have been a very costly technical foul.  To his credit, he made both free throws in the clutch.  Nevertheless, if Coach Grant can't get Tony Mitchell to buy in and play hard focused basketball for 40 minutes, this team will never meet it's full potential.  We need Tony, and I hope he realizes that he needs us too.

Charles Hankerson got a lot of playing time with Trevor Lacey being taken out about midway through the second half.  Coach Grant said it was not injury related, but the trainers were clearly looking at his back.  I like Hankerson, nobody plays harder than him and he brings a lot of positive energy to the team.  He's got some size to get some rebounds and was a good shooter in High School.  However, his shot is not very fluid and it's too much of a line drive.  He's not really quick enough to be a great on ball defender on the perimeter.  His handles are certainly not good enough to help at the point.  I know Bobbyjack thinks he could be the savior of the season, but he really doesn't do any one thing that either Lacey, Randolph, or Steele doesn't do better. 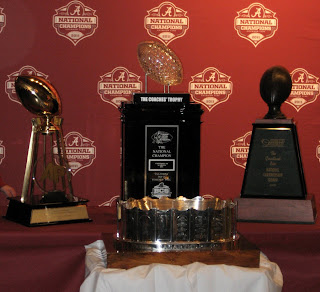 The football hardware was on display before the game.  I suppose a good number of the "sellout" crowd, must have bought tickets for the sole purpose of getting their picture taken with a trophy and left without even watching the game.  That was the most pathetic "sellout"  crowd I have ever seen.  I would guess there was no more than 11,000 actually there.  The student section was a complete joke.  I am normally an advocate of the students, they tend to be the most vocal and passionate fans, and I've been saying for years we should get them closer to the court.  I also understand that it was a 12:30 Saturday start, but if they can drag their hungover asses into Bryant-Denny for an 11:30 am kickoff, there is no reason they can't bring a few thousand to Coleman for an early afternoon game.  If they can't, then we should sell those tickets to the public.  Folks, we are still a top 40 RPI team with only one "bad" loss, and it was on the road.  We are still in very good shape to make the NCAA tournament.  If we can put together a winning streak, we can still finish in the top 4 of the SEC and get the first round bye in New Orleans. 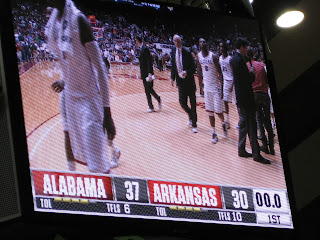 I am impressed with what Mike Anderson is doing at Arkansas in his first year.  They have won all their home games, even though they have been horrible on the road, after losing their best player.  This is a team that could be in the tournament conversation if they continue to improve, and we will have our hands full in Fayetteville.  I look forward to this rivalry returning to the level it was under Wimp/Nolan in the coming years.  At this point, I just hope we can hold up our end of the bargain.

Up next, Any Kennedy's Ole Miss rebels come to Tuscaloosa for a 7pm tipoff next Saturday.  This is a good time for a week off.  The team clearly needs to work on a number of things, but it's always easier to improve when you are coming off of a confidence building win.  If we can get this win, we'll be back to .500 in conference play.  It's another huge game, hopefully our fans will be smart enough to realize that and give these guys some support.

Steele and Releford played so well. I think Steele deserves to be a starter, but perhaps Grant likes to have him come off the bench when Releford has to sit.

Lacey had some nice plays and I like that he is not afraid to shoot because I think he has a nice stroke and eventually the shots will fall.

I have been really impressed with Levi Randolph. He really hustles when he's out there and I think he has a bright future.

As for Green and Mitchell, I just don't think they're the answer. Green rarely does anything in the post and Mitchell just doesn't seem to fit in anywhere. He kind of reminds me of Kennedy Winston: Extremely talented but selfish. At least Winston could shoot.

I think in the coming years we'll be damn tough, with Releford, Randolph, Lacey and Cooper, but I still am not sold on this team.

Here's to hoping for the best!

"I am impressed with what Mike Anderson is doing at Arkansas in his first year..............At this point, I just hope we can hold up our end of the bargain."

we'll lose in fayetteville, likely by 20. of course, that will come as a shock to no one.

mike anderson is gonna cost a couple of sec coaches their jobs.

finebammer, at this point I don't expect us to win in Fayetteville, but one thing I can say with almost certainty, we won't lose by 20. When was the last time we lost by 20 under Coach Grant? It just doesn't happen. Now, there have been times we have been down 20, but we always make it respectable.

Today (2/1/12) is national signing day for football. Speaking of recruitment, where are our signees for Basketball for 2012 ? While everyone in Alabama celebrates the football-recruiting success (which certainly is exciting indeed), we can't forget about our Crimson Tide Basketball ! All the SEC has picked up commitments except for Alabama, and this makes me very very nervous. It's true that we don't need a super-huge class (for example Kentucky's dependency on that, every year), so we really don't need many. If we are not able to welcome a certain 5-star to the Crimson Tide Family, then who else is there available at this point? But I guess we will trust Coach Grant and his Staff working on it. (... but I'm still nervous.)

Lib: The only prospect they've offered that I know of is Devonta Pollard, whom I assume was the 5-star you were referring to.

The team has 13 scholarship players with one senior (Green). At this point I don't foresee Tony leaving early so, barring transfer, there will only be one schloarship available for next season.

Hopefully Pollard signs with Bama. He's a talented kid who can play a number of different spots on the floor. The coaching staff has aggressively recruited him, but a number of heavy hitters are also recruiting him (Kentucky, Missouri and Georgetown along with Ole Miss and State). I'm sure the staff has a back-up plan if they can't land Pollard, but I'm unsure who at this point.