JaMychal Green was back in the starting lineup, but he still does not appear to be back to his old self.  He had a much better game than he did in Athens, but was still tentative around the basket at times and mishandled a couple of passes.  Nick Jacobs came off the bench and played well.  His defensive footwork in the post has really improved. 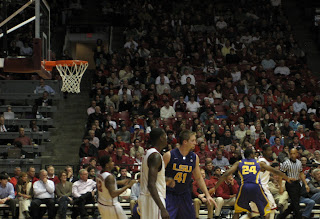 Early on the Tide defense was stifling as always, but the brick mason shooting returned which allowed LSU to keep the score relatively close despite being badly outplayed.  The last possession of the first half was a big key to the game, in my opinion.  Nick Jacobs made a great steal as LSU tried to work the ball into the post, which allowed Alabama to take the last shot.  Coach Grant opted not to use his "use it or lose it" timeout, I assume because he liked the chances of getting an open show with our smaller lineup on the court at the time.  Andrew Steele found Levi Randolph in the corner who knocked down a 3 pointer at the buzzer. 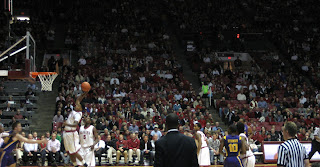 In the 2nd half, some of those outside shots finally started to fall and we were able to pull away.  LSU stayed in a man to man defense most of the game, and our halfcourt offense actually looked pretty good for the most part.  We ran a lot of 3 out motion and some pick and rolls.   We were setting good off the ball screens and getting open looks from our cutters.  LSU did manage to cut the lead to 8 at one point, but Trevor Lacey made a couple of plays at both ends, and Releford knocked down a 3 to stretch it back out to 15.

Releford had one of his better games, driving to the basket, making some outside shots, and getting everybody involved.  I thought Levi Randolph also had a great game, making the big shot at the end of the first half and playing great defense.  He did a lot of the little things that don't always show up on the stat sheet.  Tony Mitchell had his usual Sportscenter moment on an awesome one handed dunk off of a missed 3 pointer.  He seemed to come out of nowhere.  He would have had a couple more alley oops but his teammates overthrew the passes.

I never really felt like this game was in doubt because LSU was having a difficult time sustaining any momentum on offense.  Our full court pressure, and even our on ball defense in the man to man seemed to have their backcourt frustrated all night.

It was a solid crowd, with the student section getting packed well before tipoff.  The rest of the crowd was late arriving and early leaving, but there was close to 14,000 in the house.  The fans had a lot of fun at LSU's expense with regards to the BCS Championship.  The student section cheered loudly on LSU's first possession as they crossed midcourt.  A chant of "Just like Monday" broke out late in the game as the Tide ran down the clock, and the post game Rammer Jammer cheer featured, "We just beat the hell out of you, AGAIN!" 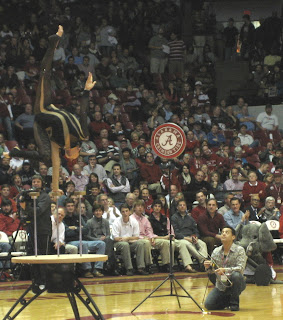 The marketing department finally booked a good halftime show.  This chick accurately  shoots a bow and arrow with her feet while standing on her hands, blindfolded .  It was second only to the girl who rides a unicycle and kicks bowls onto her head.  I have no idea how these people get these ideas, much less train and perfect their skill.  Anyway, it definitely made up for having to watch a bunch of 3 year olds stand in one spot and attempt to dribble a basketball at the last game. 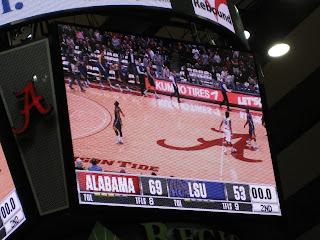 Up next, we travel to hell, I mean $tarkville, MS, to take on Rick $tansbury'$, Mi$$i$$ippi $tate Bulldogs.  Long time readers know how I feel about that program, so I won't rehash it.  I will say they are a talented team this year and it will be a very difficult game for us.  Tipoff is at 3pm Saturday.  Assuming I don't get killed or arrested over there, I will post something after I get back.

The "just like Monday" chant came as we were 21 points ahead.