This was our view for the game.  Thanks again to Bobbyjack for taking care of the tickets.  This was one of our better games of the year as we completely dominated an inferior team on the road.  JaMychal Green did not get the start, but played very well coming off the bench to score 9 points.  More importantly, he played great defense without fouling, pulled down some rebounds, and set some nice screens which opened up our half court offense against Ga Tech's man to man defense.

Speaking of which, I have no idea why the yellow jackets insisted on staying in the man to man for practically all of the first half and most of the game.  It was obvious that they were not quick or athletic enough to guard us in space, and they had no answer for our post game.  Meanwhile, we had another poor shooting performance, going 3 of 12 from downtown, but it didn't matter because we were able to get good looks inside.

The big story of the night was the return of Andrew Steele.  Honestly, I was not expecting him to be able to help this team out much.  I figured he would just be another good defender in the back court, but not much help on offense, and we certainly have no shortage of those types of players right now.   He far exceeded my expectations.  While he may not be the shooting threat we need, He's strong and physical with the basketball and makes good decisions.  His leadership presence will help us on the court, and he's money in the bank when he gets to the free throw line.

The game was never really in doubt.  We gradually stretched the lead out to 40-22 by halftime, with Tony Mitchell having a few demoralizing dunks on the Jackets along the way.  Georgia Tech had all kinds of problems scoring against us.  They made some adjustments at halftime and were able to break the press for some easy baskets and get a few stops to close the gap to 10, but Coach Grant called timeout and got everybody refocused.  After the timeout, we forced a couple of quick turnovers and quickly stretched the lead back out to 15+ and it was smooth sailing from there. 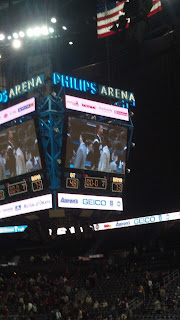 It was nice to be able to empty the bench and give some of our guys a break down the stretch.  It's always good to see walkon Keon Blackledge get into the game.  I was a little surprised that Moussa Gueye didn't get to play.

It was a very small crowd, I would estimate around 5,000, at least half of which were Bama fans.  It was not much of a road environment, and the few Georgia Tech fans we encountered did not have any real expectations for their team.  It's hard to see in the pictures, but they actually covered the entire upper level of the arena with a big black curtain, much like auburn used to do at the old Beard Eaves Coliseum.  Phillips Arena is a very nice venue, and this game had a bit of an NBA feel to it.  It was different seeing NBA scores on the ribbon boards, and the Bulls-Hawks game was being shown on the TVs on the concourse.  Speaking of which, it was fun watching my Bulls come back from 19 down to win, much the the chagrin of the locals.

I should probably mention that long time UAB coach Gene Bartow passed away last night.  Out of respect for the deceased, I will not make any further comments regarding Gene Bartow at this time.

Up next, we go for the Georgia State Championship as we travel to Athens for a 7pm Eastern/6 Central tipoff Saturday night with the Georgia Bulldogs.  This is another winnable road game, and we need it to get off to a good start in SEC play.
Posted by DJC at 11:24 AM

Keon did not play. Julian Goode was wearing Keon's Jersey until his becomes available. Thanks.

Ah, now if only every game for the rest of the season could go like this one !

For Andrew Steele to almost match his career high in points in his first game back is awesome! His contribution will make us a little less freshmen-dependent as we battle through the SEC portion of the schedule.

Poor Georgia Tech, destined to end up at the bottom of the ACC... But Florida State sure did whip the Town of Auburn Univ. (29-point blow-out! Can't wait for our turn at them!)

The walk-on junior guard, Keon Blackledge, has vanished and no longer is listed on the Roster at RollTide.com. Whatever happened with him? But Julian Goode is a new walk-on sophomore Forward, who had been on the scout squad.

Interestingly, during the post-game radio interviews, Coach Grant said that he thought it was "in Moussa Gueye's best interest" not to appear in this Game against Georgia Tech, and the interviewer, Chris Stewart, didn't press further for any rationale....

FINALLY we pick up a true Road Victory as our Pre-Conference ends. Can you believe it, this basketball season is half-way over already with only 8 more home games left on the schedule !

My guess is Gueye is feeling some pain.