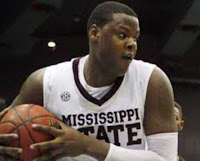 This was yet another fun contest to watch between these two arch rivals.  The game went back and forth with each team going on long runs to stretch and then to regain the lead.  New comer Arnett Moultrie and senior guard Dee Bost proved to be the biggest differences in the game, providing 42 of their team's 56 points.  The Tide turned the ball over way too many times in the first half, but played with much more discipline in the second and committed only one.  The score was not high, but the tension was for the full 40 minutes.  The disappearance of Bama's three point shots made a huge difference in the game, hitting only one of its nine three attempts.  The home court advantaged was another big difference in what turned out to be a very close contest.  The unfamiliar court probably contributed to the youthful Tide's three point woes too.

"You can be a lot more aggressive at home than you can on the road in this league," said Wimp Sanderson while providing color commentary during Wednesday night's game against LSU.  We got away with it Wednesday.  M$U got away with it this afternoon.  I'm not complaining.  That's just the way things are in the SEC.  The result was that super transfer Moultrie scored a game high 25 points and grabbed 13 rebounds while being whistled for only one foul.  Still apparently out of shape, Renaldo Sidney was whistled for only 3 of the 15 fouls he committed (Moultrie probably committed about as many) during 28 minutes of play, contributing 8 points and 5 rebounds.  The home court advantage was never bigger than when Bama's Jamychael Green put up a jump shot to retake the lead with about 90 seconds to go from about 8 feet out that he missed after contact that was not whistled.

Dee Boost is the current M$U player who seems like he's been there for about 12 years.  (They always seem to have a player like that.)  He poured in 17 points for the Bullies, including his last three shots outside of the arc.  They were State's only threes of the game and proved to be the difference in the game down the stretch.

Bama demonstrated considerable resiliency coming back from about 10 or 12 down in the second half.  A loss is a loss, and a loss to M$U always is worse than any other loss.  Still the Tide demonstrated a good deal of maturity by making its run to have a chance to win the game.  Andrew Steele's presence seemed to contribute a great deal in that department once again.

Here's your standard Box Score.  I know DJC attended the game.  Hopefully his lovely better half accompanied him and will provide some pics.  Hopefully one of our other contributors can offer some more information on the game.  I will try to watch my recording early tomorrow and will log back in if I notice anything useful or informative.

Kudos to the M$U Bulldogs.  Their team played hard, their crowd was interactive, and they found a way to defend their home court.  Hopefully we can return the favor when they visit Coleman Coliseum later this season.  This and the Arkansas game are my favorite rivalries in the conference.  (Kentucky and Vandy would be good too if we could beat them a little more often.)  State is a worthy rival and opponent.  Alabama gave them a really good shot today.  I just wasn't quite good enough.
Posted by Alias at 6:30 PM