Day at the beach against teams from the state of Peach. 74-59. 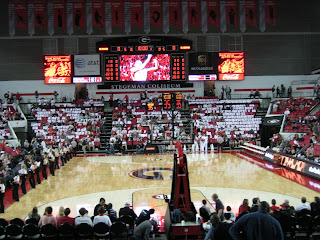 Our view for the game.

I have been saying all year that Trevor Lacey could emerge as our consistent scoring threat.  He had a breakout game in the first half against the dogs.  UGA opened up in a 2-3 zone, and stubbornly stayed in it for most of the first half.  We made them pay dearly by draining 6 threes and killing them on the glass.  Lacey was 3 for 4 from 3 point range and ended up with 19 points to lead the Tide in scoring. 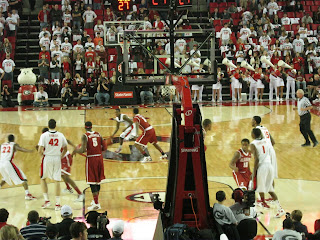 Our defense was great as usual.  The press gave UGA all kinds of problems, and they could not get open looks against our man to man in the halfcourt.  Engstrom even did a great job in the 1-3-1 first half forcing a couple of turnovers from the corner trap. 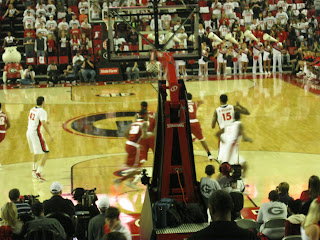 We held a 38-26 lead at halftime, and my only concern was that about half of our shots came from behind the arc.  I feared it wasn't reasonable to expect our outside shooting success to continue, and we would rely on it too much in the 2nd half.  Thankfully, that was not the case.  We did not make another 3, but we only shot 5 in the 2nd half. 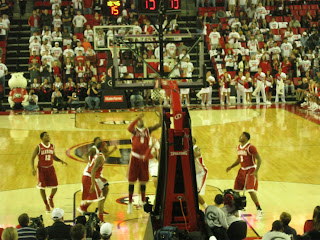 UGA was able to make a 2nd half run.  They made some adjustments at halftime and started aggressively attacking the basket.  We got into foul trouble, and were in the bonus before the 10 minute mark.  Tony Mitchell, who dominated the boards, had to come out of the game with 3 fouls, and JaMychal Green was not having one of his better days.  UGA cut the lead to 4, and had all of the momentum and the home crowd into the game.

In my mind the key possession of the game came after UGA cut the lead to 4.  The fans were on their feet and making noise.  UGA was playing a tight man to man defense, and bringing a lot of ball pressure.  Lacey showed a lot of poise by not rushing a shot or making a bad decision.  We executed with patience in the half court, and the result was Andrew Steele getting an and one on the assist from Green.  Georgia never seriously threatened again and started forcing quick outside shots.  We were perfect from the line, which helped prevent them from getting back into the game.

I do not believe JaMychal is completely healthy.  He had 9 of our 17 turnovers, mostly from dropping passes, mishandling the ball, and travelling.  He did have some nice passes within the halfcourt set, but he looked tired toward the end of the game.  I thought Charles Hankerson played well the few minutes he was in the game, knocking down a trey and forcing a turnover.  Andrew Steele had another great game, his leadership on the floor may have been what we were missing in our earlier road struggles.  He has a calming effect on the team, makes great decisions, and is a stopper on defense. 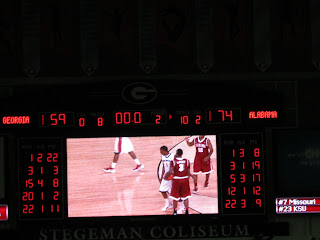 Georgia is not a very good team, but this was a great win on the road to start SEC play.  With the win, it gives us the unofficial Georgia State Championship,with 2 easy wins in the same week over the state's biggest schools.  It wasn't a very big crowd, probably around 7,000 or so, and there were not nearly as many Bama fans present as in Atlanta earlier in the week.  I would estimate only a couple of hundred Tide fans, which is understandable given the football game in New Orleans tomorrow night.  It was great to see Bobbyjack again, and thanks to my girlfriend for not only taking the pictures but helping with the driving duties.  I never would have made it to this game without her, after a late night at work the night before.

Up next, the LSU Tigers come to Coleman Coliseum for our customary 8pm tipoff Wednesday night.  LSU is coming off of a 20 point win over Ole Miss, and hopefully will be highly motivated to avenge their football loss from two nights earlier.  Let's pack the house and make it rough on the Bayou Bengals.
Posted by DJC at 2:19 PM

I want REVENGE for the loss at LSU in women's basketball a few days ago, AND for all the Alabama natives who left us for LSU.

...(LSU actually has more players from Alabama than LSU on its women's basketball team, and one starter from Muscle Shoals on their men's team).

I meant: "... more players from Alabama than the state of Louisiana..."