Perhaps the Tide is overcoming adversity to peak at the right time.  $tate is a very talented but struggling team, and we dominated them for the 2nd half. 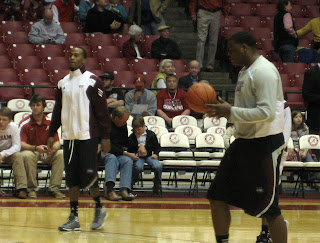 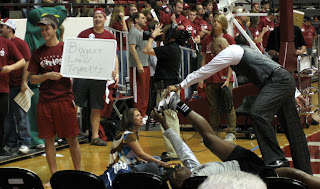 Notice the biggest loser candidate wears a different type of warm up suit from the rest of the team.  I guess they don't make the others in his size.  I think Sidney's fat ass hurt the dogs more than he helped them.  Sidney picked up a couple of quick fouls in the first half, and $tate switched to a zone, which he had all kinds of problems with.

The starting lineup was Lacey, Steele, Randolph, Cooper, and Gueye.  Coach Grant said that Releford did not start because of a "time management" issue, meaning he was likely late for something.  Lacey was clearly struggling to play on his sprained ankle, which he re-aggravated in the first half and did not return to the game. 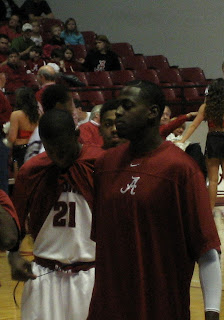 JaMychal Green was back, but not in the starting lineup.  He gave us a solid 25 minutes and 9 points off the bench, knocking down a number of mid range jump shots.  Green and Releford helped the bench outscore $tansfield's bench 32-4. 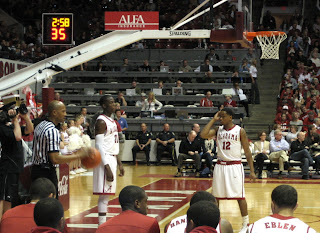 The silver lining of the Green suspension is the development of our younger post players.  Engstrom and Gueye have come a long way.  They are no longer a huge liability when they come into the game.  Carl had a great game defensively with 4 blocked shots and was not at all intimidated by lard butt Sidney and Moultrie.  All of the post players deserve props for containing that front court. 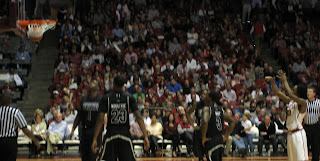 Meanwhile, Levi Randolph was doing it all.  He played great defense both on and off the ball, knocked down some outside shots to stretch the $tate Defense, slashed to the basket, and pulled down rebounds.

Randolph was the MVP, but it was a great team win.  We made our free throws and made 6 of 11 from the outside. 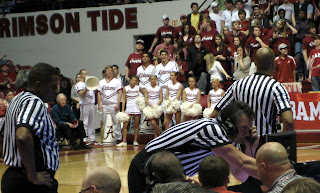 After some consideration, the officials determined a Green foul on Moultrie was not intentional.  It actually should have been called a technical foul on Moultrie for leaving the court, as he walked halfway down the tunnel after the foul.  Coming from Moultrie, acting like a drama queen over a potential intentional foul is rich.  He should have been suspended for leg whipping a UK player from behind in the back court during their last game.

I was concerned at halftime.  The score was tied at 25, but seemed to be playing more to their style of play. In the second half, we started pressing more which led to several steal and some over and back calls against $tate.  $tate did not even come close to matching our hustle and intensity in the 2nd half, we routinely beat them for every loose ball.

$tansfield is a great "recruiter" as we all know, but he is not a very good coach.  He clearly has a difficult time keeping his team focused and motivated, not to mention some of the head scratching decisions he makes within the course of a game.  If they don't make the tournament, he may very well be on the hot seat, as well he should be.  There is no excuse for a team this talented to not make the NCAA tournament.  Let's hope they drop a couple more games, as a coaching change in $tarkville could greatly increase our chances of landing Devonta Pollard.  Speaking of which, I was very surprised that Pollard was not at the game. 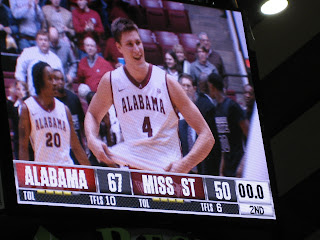 I am extremely disappointed in our students.  This game was a hard sellout.  There were people outside looking for tickets, yet the student section was barely half full.  This is a team that has suffered through some adversity and is playing great basketball right now, on a Saturday afternoon game against our biggest rivals, on a push to end a 6 year NCAA tournament drought, and we can't even pack the house.  If the student section is not filled by an hour before tipoff, they should sell those tickets to the general public.  That being said, those of us who were there...wow, what an atmosphere!  The fans in attendance knew how big of a game this was.  It was loud throughout  and fans spent a lot of time on their feet.  By the time we got to Rammer Jammer, I barely had any voice left.  $tate did not bring nearly the number of people they normally do.  Perhaps that is a sign they are starting to turn against their "recruiter."  I made sure to wish the very few $tate fans that I  encountered after the game a sarcastic "good luck in the NIT."

Up next, the auburn Tigers come to Tuscaloosa for a 7pm tipoff Wednesday night.  I believe a win would pretty much guarantee us an NCAA tournament bid, but we are also still fighting for a top 4 seed in the SEC tournament.  Auburn will come in fired up, looking to avenge their earlier loss to us.  Hopefully we will have another good showing, and some of the football fans who will be in attendance will join our basketball bandwagon.

Thanks for mentioning the students. I forgot to mention the attendance last night. It looked to me like we had between eight and ten thousand people in the seats and the students were no where to be seen. My own daughter had gone out of town as had her roommate. I wish our students would support this basketball team the way they have the football team. Our young players have come a long way over the course of the season and they could use some more support. They did seem to enjoy the support of the fans who were present last night.

I can't figure out how your posts are double spaced. Everyone else seems to be fine.