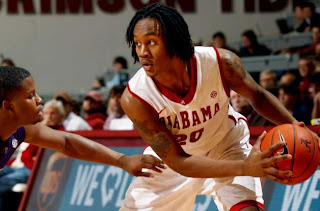 Led by Freshman swing man Levi Randolph's (yes, I know that's an old picture but I could not find any from tonight's game) 18 points, Alabama defeated its arch rival Mississippi State to avenge the earlier season loss on the Bulldogs' home court.  Although Randolph took what apparently was his turn to be the team's scoring leader, the points came from all points on the floor tonight.  Every Tide player made important contributions, including Engstrom who failed to score but provided an important defensive presence underneath the basket which included 5 rebounds, 4 blocked shots, and quite a few shots altered.  Bama even hit 11 of its 12 free throws in the game.

Bama's offense looked sluggish again, particularly in the first half, with very little directed motion away from the ball.  The tempo seemed to lift when JaMychal Green walked onto the court for the first time in two weeks about 8 minutes into the first half along with Trevor Releford.  They built a 7 or 8 point lead on $tate, but then went back into their offensive shell.  Nick Jacobs did not start but still played only a few minutes of the first half after picking up two quick fouls.

Even with the continuing offensive woes, this team is becoming fun to watch again as the remaining players seem to be gelling at just the right time.  Another bright spot was Bama's 6 for 11 shooting outside the three point arc with the points being spread among several players.  Randolph and Cooper tossed in two each and Releford and Hankerson each hit one.  All of them came at critical times in the game when $tate appeared to be gaining some momentum.

M$U looked unbeatable during the last 12 minutes of the first half.  Bost and Steele both had found their range and it seemed like every three they launched tickled the tassels on its way through the hoop, including a couple that looked like they'd been shot from the Coleman Coliseum parking lot.  Other than that stretch, $tate seemed a bit out of sorts, almost as if they were disinterested in the game.  That would be very unusual for a $tan$field squad, but I did not get the impression that Bama's defense was that much better than it has been all year.  $tate committed either 3 or 4 back court violations (all but one forced by the Tide's press), suffered several uncharacteristic defensive lapses, and their outside shot left them just as suddenly as it had arrived.

It was good to see Green back on the court.  He had a solid game even if he scored only 9 points in 25 minutes of play.  He displayed only one mental lapse when he drew a whistle for an elbow thrown in retaliation.  (I still don't know why the officials spent 3 or 4 minutes looking at the replay video after that play, but I seldom understand anything SEC officials do.)  Even Ted Valentine's grandstanding could not dampen the spirits in Coleman Coliseum tonight, and Green responded much better than Renardo Sidney did when the zebras blew a questionable whistle on him.

Trevor Lacey started again and reinjured his ankle after 11 minutes of play.  He never returned to the court and could sometimes be seen grimacing on the sidelines, but Coach Grant suggested during his post-game interview that he did not want to push the ankle any more than he already had.

The crowd arrived late and eventually grew to about nine or ten thousand.  Those who attended were treated to a rare lopsided victory in this heated rivalry and most of them did stay to sing Rammer Jammer.  Here's your obligatory Box Score to contemplate while waiting for one of our real reporters to post something about the game.  I'll probably think of something worth typing when I crawl in bed 5 minutes from now, but I've been up since 4:30 so I'm not coming back to add it.

Bama hosts api in Wednesday night's season home finale.  Please come and cheer on your favorite team.  The kids who have made it this far surely have earned your support.

Randolph and Cooper are really starting to come into their own and are a huge boost this team needs.

Steele is our MVP right now. He is an absolute monster defensively.

Because of the adversity our team has endured it has allowed us to build some serious depth on the roster. Our "bad players" are providing solid minutes. Yes, I'm talking about you, Gueye, Engstrom and Eblen. They may not be pretty, but they are not liabilities when they're out there.

If we can gain confidence shooting the ball we can go a long way. Hankerson needs to play more if at all possible. He's earned it.

Levi f*****g Randolph is becoming a monster. This is the best 3 game stretch in the Anthony Grant era. If we play like we have been we'll win our next two games.

I was at this game and well...I feel dumbfounded. Props to A-Grant, much respect for getting these boys ready. For starters, I would like to apologize for giving up on this team and downgrading them, they have really shown me up and shown how bad of a supporter I was. The team has really grown up and from being a team being a that probably wouldn't have made the NIT has turned into a real threat. They have shown great progression over this stretch when they could have fell back and given up. I must say congratulations to Coach A-Grant and his team.

With that said. We still need to win out, not just because it's Auburn( though every win against them is grand and it feels good to shutup some of those rednecks about their "up-rise" in a basketball program). But for a first round bye in the SEC Tourn.

Glad to have you on the Hank train. Kid has proven himself to be a very good player. IMO he should get 20 minutes a game.

Randolph has been my favorite player on this team since about game 3. That kid's motor never stops running.

alabama has played a very tough schedule and should, if we win 3 or 4 more, be a single-digit seed in the ncaa tournament. defense in basketball really does win championships so don't be surprised if alabama makes it to the sweet 16.

I obviously just want to get in the tournament, but if we're in I'd rather have an 11 seed than a 7-10 seed. The 1 and 2 seeds are much better than the 3 seeds and the 3 seeds don't get to always play in their backyards like the 1's and 2's.

And playing a 6 seed isn't any different than playing a 7-10 seed. It's all matchups.