When they told Nick Jacobs he was to replace JaMychal Green in the starting lineup, he took it too literally and immediately committed 2 fouls to start the game.   This meant more playing time for the Moose and the Swede.  You can't help but like those guy, and they made a few good plays, but at this point in their careers when they need to play extended minutes, the bad is going to outweigh the good.  Despite 60% shooting and going 3 of 5 from 3 point range in the first half, compared to Florida's 30% shooting, we were still only tied at 26.  I knew we were in trouble then, because we were not taking care of the basketball and it wasn't reasonable to expect those shooting numbers to continue.

Donovan made some great adjustments at halftime.  He switched to a zone; which, as has been the case most of the year, completely shut down our offense.  We had way too many turnovers, many of them unforced.  Releford was playing banged up, and the trainers were looking at him every time he came out of the game.  Apparently, he has been seen on crutches around campus today.  Florida finally started making some of their shots, and opened the half on a 16-0 run.  Ballgame.  It took us 9 minutes to make a FG.

Part of the problem is a lack of chemistry due to the unusual lineups we are having to play thanks to the suspensions.  Players aren't used to playing together, and it shows, especially on offense.  At times last night we were too unselfish with the ball.  We passed up a lot of open shots to make passes that really did not make any sense.  Both Cooper and Steele had some good, midrange looks that they pissed away by inexplicably trying to drop the ball off to Carl or Moussa on the low block.  Hankerson had a 2 on 1 with Eblen, and decided to try to pass the ball to Ben at the last second instead of taking it to the basket himself.  Anybody on our team taking a fairly decent, mid-range shot is a better option than expecting Carl, Gueye, or Eblen to actually catch a pass on the block and shoot a contested layup in traffic.

After falling way behind, Andrew Steele showed some leadership and tried to rally the troops.  We started playing more aggressively, driving the ball at the Florida defenders and getting to the line.  We got one of their post players in foul trouble, and made some small dents in the lead, but we had too many missed opportunities to ever seriously compete. 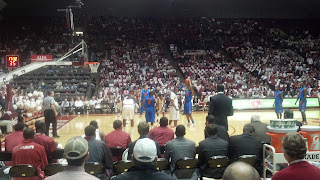 Getting to the line doesn't do much good if you can't make your free throws.  Florida cashed theirs in, 13 of 16.  Meanwhile, we shot a pathetic 50% from the stripe.

As expected, the crowd sucked.  It was an early 6pm tipoff on Valentine's Day, and as noted below, many fans are somewhat alienated by the suspensions.  For what it's worth, Coach Grant received a standing ovation when he took the court pregame and gave the fans a "thumbs up."

The bottom line, this team is going nowhere unless Green and Mitchell return AND buy in to the team concept.  For the first time this year, I am not optimistic about our NCAA tournament hopes.

Up next, the Tennessee Vols come to Tuscaloosa for a 12:30pm tipoff Saturday.  Who knows what players we will have available, but UT is playing pretty good ball right now and they could all but put an end to any tournament hopes we are still clinging to.  The whole situation is depressing and frustrating, but I'll be there to support whoever Coach decides to put on the floor.  The players who are still with us, are giving it their all.  For that, they deserve our respect and support.
Posted by DJC at 1:10 PM

Did Brandi go to the game with you?

Even if we win this week, I still expect reservations for the NIT. I'm just hanging my hat up on this year. Bama Basketball has always been sort deceiving. I do believe in Coach Grant but this year we were expected for the NCAA Tournament and now I think their is no way we get in. With that said I say Roll Tide to you all and hopefully by this time next year we will be talking how good of team we have instead of how disappointing.

Alias, she did, but due to the early start came straight from work and did not have her camera. Thus the lack of pics, she took the one I posted with my phone.