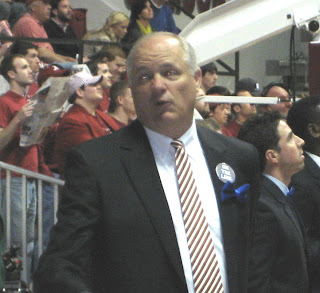 The Coaches and staff all wore blue bow ties for prostate cancer awareness.  Coach Hipsher wore his in a somewhat unorthodox manner.

Tony Mitchell and JaMychal Green remained suspended.  Nick Jacobs was unavailable due to injury.  Trevor Releford was banged up, and Tennessee was riding a 4 game winning streak, including a season sweep of Florida.  The general consensus before the game was that a loss was inevitable, and with it our hopes of receiving an NCAA bid this season was over.

Our starting lineup was Lacey, Steele, Randolph, Cooper, Gueye.  Notice the lack of a true point guard and legitimate post presence.  We have now started 11 different players this season, and no one player has started every game.    Thankfully, somebody forgot to tell Lacey, Moose, Releford, and Steele that our season was over.  These guys would not be denied, and they simply out hustled UT all day to get the win. 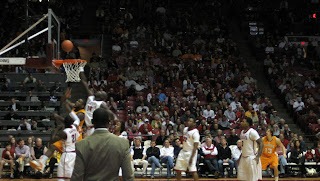 Gueye and Carl both had their best games of the season, if not career.  The Moose was a wall inside defensively with 6 blocked shots.  Carl was solid defensively despite being caught out of position a few times, but he also had 7 points and 7 rebounds, including 4 offensive rebounds.  They both fouled a lot, Carl fouled out late while Moose used 4 of his, but they were good fouls for the most part.

The fact that we were able to out rebound them with Carl and Moose as our only bigs should tell you how much these guys hustled.  We seemed to come up with every 50/50 type loose ball.

Lacey was our leading scorer with 18 points.   I really liked our offensive plan.  We had a lot of motion and ball screens, and got the ball to cutters moving toward the basket.  Once again, outside shooting was not great, but Lacey, Steele, and Releford had a lot of success driving the lane and getting to the free throw line. 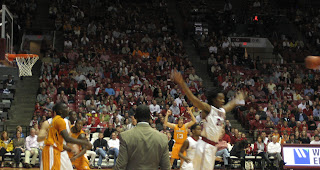 Our defense was awesome.  We mixed up the man and zone and had UT off balance all day.  While the press did not force a lot of turnovers early in the game, it seemed to get the Vols out of their comfort zone.  Tennessee wanted to go inside to take advantage of our lack of front court players, but they found the Moose and Carl to be much tougher customers than expected.  Fortunately, their 3 point shots were not falling.  We began to stretch the lead in the 2nd half, and with the crowd into the game the Vols seemed to get rattled.  We forced a number of turnovers in the press that allowed some transition baskets, and we stretched the lead to 16.  The game was never again in doubt. 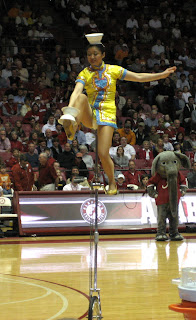 Fans were treated to my favorite halftime show.  This chick rides a tall unicycle while kicking bowls into the air and catching them on her head.

I thought Coach Grant did a great job with his substitution patterns, especially considering what he had to work with.  He rotated the 7 footers in such a way that they were able to stay fresh.  He got the most out of a banged up Releford, and avoided putting some of the unusual lineups we've seen the last few weeks on the floor.

I was not impressed with Tennessee's coaching.  It was almost as if they didn't watch any of our film in preparation for this game.  Our struggles with the zone are well documented, but Tennessee stayed in a man to man defense throughout the entire game.  Also, with Releford banged up, they never bothered to press when he wasn't in the game. 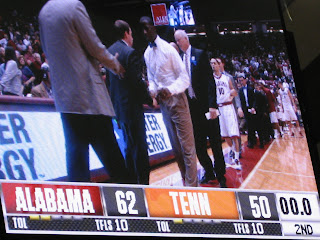 The game was announced as a sellout, but the crowd was nowhere near capacity.  The student section was less than 1/3rd full, and a lot of the season ticket holders were no shows.  That ended up being a good thing though, as it allowed Hville to come sit with us.  I would estimate the crowd at maybe 11,000 or so, with a couple of hundred people wearing puke orange scattered throughout.  Those that were there, appreciated the players effort and were very loud and into the game.

In my opinion, it is very likely that the next home game, Saturday at 5pm against Mi$$ $tate, will determine whether or not we make the tournament.  We SHOULD beat auburn at home, and a win over $tate would mean we finish no worse than 19-11, 8-8.  With our strength of schedule and RPI, that is probably good enough, though I would feel much more comfortable with a win or two in New Orleans.

First things first, up next we go to Fayetteville, AR for a 6pm tipoff Thursday night.   The game will be televised on ESPN2.  Arkansas was undefeated at home this year until suffering their worse loss ever at Bud Walton arena to the Florida Gators this weekend.

i was very surprised that ut didn't begin the second half in the zone ala donovan.

was that some ut broad screaming while we we shooting free throws??

I assume. I heard that too but couldn't figure out exactly where it was coming from.

echoing something bobby touched on earlier that being the jeremy lin story.

i used to follow the nba religiously. back in the eighties i'd watch the early game then hit the streets of b'ham to try some new move i'd seen.

i faded from it due to the thuggish reputation that surfaced post-jordan.

but if you follow b'ball at all and you're unaware of linsanity, you're missing a show.

here's a franchise that has made all these hi-dollar, hi-profile moves and this kid comes from nowhere and changes everything for the knicks. the giants have just won a damn super bowl and lin has eclipsed them in the city.

this story, more than anything, gives me hope for alabama basketball.

i just wish somehow grant could get releford and lacey up there to just touch him and get some of that shooting mojo.

my god, that kid can shoot!

my god this is funny!

Nuggets vs Thunder and at the same time Avalanche vs Jets...I watched the hockey game 75% of the time.

I think Bama fans as a whole are too positive about wins and too negative about losses. I didn't freak out after the Florida loss. We played even with them except those 8 minutes and last I checked the Gators were still scoring in Fayetteville. In the midst of that run in Coleman the Moose missed at least 3 point blank shots that could have stopped the run. I'm with DJC and wondering why in the hell the Vols didn't play a zone. Maybe it was a thank you for Dave Hart and Sal Sunseri! Anyway I fear the next time we play against a zone we'll be back to struggling again. But you really have to credit the big guys and Lacey for major improvement. I like Lacey running the point even though he's not a natural at that position. Plus it allows us to give Releford some rest without losing offensive production. Sorry Ben.

Been paying a lot of attention to the bubble lately and I agree with DJC, 2 more wins and I think we're in. Really most of the other bubble teams have been struggling and no one is really stepping up. I see anywhere from 6-8 teams that are below us. A Purdue win today would have been sweet. Can we get 2 wins without Green and Mitchell? Against the barn I say yes though that'll be a tough game. Aginst the mississippi schools I think it would be highly unlikely. Both of them have front courts better than us WITH Green and Mitchell and I can't see the twin towers and Jacobs slowing them down, too much of a mismatch. Arkansas? Even before the Gators went off I thought this was our best chance for another road win. We match up well with the Hogs and can play and beat them at their own game. I think their freshman have hit a wall since they haven't even been close to beating anyone recently. Their D is brutal right now.

There is a part of me that can see this team pull it together if Green and Mitchell come back this week and run the table until we meet UK in the SEC tourney. But honestly I think they'll be too many chemistry issues to pull it together that soon.

If we do make it to the dance and if we get sent to Albuquerque, I'll probably go. I think it's a 6 hour drive for me so that's doable.

If it is albuquerque I might go as well. Got to mark that state off my list.

The closest Lin comes to Bama is late march in Atlanta... and I think our season will be over by then. Damn the luck finebammer.

8-8 still scares me as we all know a few teams will win tourneys and bump others out. 8-8 probably puts us on the 10/11 line right now... and if other teams on or below that line have a deep conference tourney run it could spell trouble.