Alias did a good job of recapping the game below, so I will try not to be too repetitive.  We won this game on defense, especially in the 2nd half and down the stretch.  We used some very unusual substitution patterns, but I understand some of the players were feeling a little under the weather.  Perhaps that explains why Randolph and Cooper were not in down the stretch. 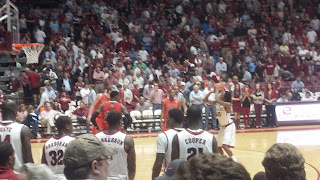 We won this game at the free throw line.  Much like the game in auburn, it's a good thing they cannot shoot free throws.

I did not get to see the senior day activities for JaMychal Green, for reasons I will get to in a moment, but I am curious as to what kind of reception he got from the crowd.  He didn't have his best game, but still put up a double-double and was the leading scorer.  He made some nice passes from the post and was big on the boards for us.  I thought he tried to do a little too much, especially in the first half.  I think we all wish he would have developed into more of a leader, but despite the occasional attitude and off the court problems, I never felt like he wasn't playing hard on the court.    I will miss watching his post moves, defense, clutch free throws, and mid range jumper. 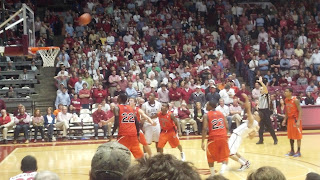 Ben Eblen ran the point down the stretch and did a good job for us, even making one free throw, somehow.  I very much agree with Alias below regarding running out the clock at the end of the game.  Our time management was AUful last night.  Once again, we failed to use our "use it or lose it" timeout at the end of the first half when auburn was on a run cutting our lead to 2.  We had momentum, the ball, and a 4 point with 2:30 to play in the game, and went to a 4 corners offense.  When you are clearly the better team, you generally want more possessions in the game.  We allowed auburn to control the pace all night and I thought we were playing into their hands by trying to milk the last 3 minutes off the clock.  Thankfully, we played great defense and JaMychal got the tip in and free throws, so it worked out, but I didn't agree with the strategy. 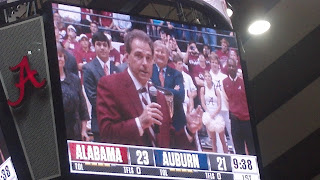 I am probably in the minority here, but I think the Iron Bowl Trophy presentation should take place on the field, immediately after the game.  It has to be somewhat disappointing to the team to be in the locker room at halftime and hear the loudest cheers of the evening while they aren't even on the floor.  One very minor complaint I have with Coach Saban is he didn't mention the basketball game or say anything to encourage the fans to get behind the team in what was a close game at halftime. 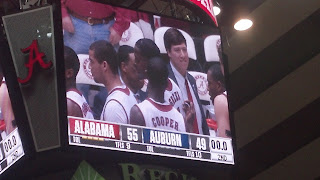 Once again, despite the crowd being a "sellout" there were plenty of empty seats in the student section.  There were lots of people sitting around us who had not been to a game all year, and were less than enthusiastic about the basketball game.  In fairness, the team didn't exactly give us a whole lot to be excited about most of the night.  Hopefully we will have a good March and bring some energy back to Coleman next year.

This is somewhat unrelated, but allow me to vent.  Yesterday was one of those days where I felt like Charlie Brown being followed around by the storm cloud.  I didn't get to leave work when I would have liked, it seemed like everywhere I went I got behind the most slow, idiotic drivers, etc.  As a result of all of this, by the time I get to Tuscaloosa and grab a bite to eat before the game, we arrive about 12 minutes before tipoff.  I was denied access to the parking lot, to which I PAID $50 FOR A PASS, because it was "full."  If you are going to charge $50 for a season parking pass, you better be damn sure you don't sell more passes than the number of spaces.  I am in the "B" lot, and I am curious if the "A" lot was full.  My guess is there were hundreds of available spaces that went unused.  I had to park illegally at Foster Auditorium and walk briskly through the rain to barely make tipoff.  Yet another in a long line of screw-ups by the incompetent dolts that occupy our athletic and ticket office.

Up next, we go to the Tad Pad, which may be the worst venue in the SEC, to take on the Ole Miss Rebels at 3pm Saturday afternoon.   We never play well over there, and they gave us all we could handle in Tuscaloosa.  This is a rare weekend road game that I will be watching on TV on the SEC network.    The SEC standings are a mess, with Florida and Vandy tied at 10-5, while Bama and Tennessee are 9-6.  I will try to study the schedules and tie breakers at some point and post what scenarios we need to get the 4 seed and thus first round bye in the SEC tournament.

"I am probably in the minority here, but I think the Iron Bowl Trophy presentation should take place on the field, immediately after the game."

i have advocated this for years.

you'll see jamychal green in the nba all-star game before it happens.

I think it was DJC who expressed a similar idea a few weeks ago. api has trouble selling out their gym. When they win the football game they sell out the game when they host us and have a huge crowd - for the first half of the game. In the past api also has charged more for their game against us than the other games they host. So not only would changing this trophy tradition likely help our basketball team but it also might cost api some ticket revenue.

Saban may not have said anything about bb in the ceremony, but he talked a LOT about it on TV. Unfortunately, the announcers were drooling over CNS and kept the conversation on football too much.

In-game coaching is not one of CAG's strengths, especially at the end of a half. In fact, it is some of the worst I've ever seen. We're not getting our money's worth in that department.

my experience is the Capstone is very entrenched in their "traditions". they have their way of doing things down there and change causes them discomfort, no matter how obviously necessary that change may be.

i argued with bob bochrath in the mid-nineties on the finebaum show about the need for a new arena for the basketball program. (and they STILL need a new arena) my argument was that the money invested would come back to them in spades.

now you would think bockrath, not being part of the old guard down there, would have had an ear for that type of suggestion.

his response was basically that any money invested would be with the football program priority one. a new arena for any non-football program couldn't possibly generate the revenue that a upgrade to say, bryant-denny would.

it is my belief that the "upgrades" at coleman came after the place became so run down they had to do something out of embarrassment.

when i was a regular down there i literally stopped using the bathrooms over the feeling i needed a shower after leaving them.

i felt the same way about wimp sanderson being replaced by david hobbs. there was an opportunity there to make some changes. the football flunkies didn't want a upgrade from wimp.

i could go on and on. the fact is they don't give a damn what you, i or anybody outside their football flunky circles think. and i can guarantee you they damn sure don't care what the players hear.

i'll never forget mark gottfried recruiting rashad anderson. you may remember him as a in-state recruit that shunned alabama for jim calhoun and uconn.

i've always imagined anderson walking around down there, looking around, then telling himself i'm gonna get the hell outta here and go play somewhere where they're serious about basketball.

(in the interest of truth in advertising, i knew of gerald wallace's commitment to alabama two weeks before it was announced. i told some close to gerald the same thing. i've always wondered where his game would be now had he played in a program that was serious about basketball)

on his way to picking up a national championship ring at uconn, anderson dropped 36 points on us in the '06 tournament.

if you recall, it was after that that gottfried and alabama proceeded to ride ronald steele into the ground like a rented mule.

coleman looks better now. they spiffed it up and flash lights in your eyes, but my recent experience with the will call and yours with the parking tells me little has changed concerning the attitudes about basketball.

but good luck with that FOY trophy idea.

(my heart says yes, but my head says no way)