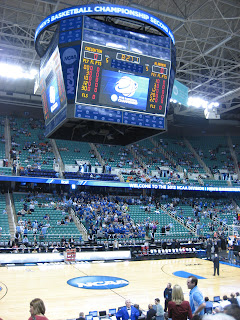 Most of us thought we would have a great chance to win if we kept the score in the 50's and held McDermott under 20, but unfortunately it did not work out that way.  Give Creighton a lot of credit, they found a way to win despite playing our game. 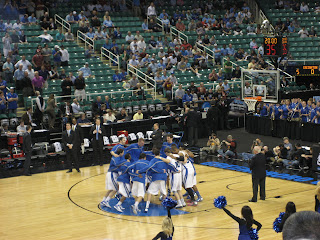 One of the key statistics was Creighton only turning the ball over 7 times.  We got a steal on their first possession, and I was hopeful that our press would be able to create some offense for us all night, but Creighton settled down and found a way to break it, often leading to open 3 point opportunities for them.  Creighton built an early 7-2 lead, but we made some adjustments and shut them down for most of the first half, holding them to only 23 points at halftime.  Coach Grant recognized that the traps were getting beat so we went to more of a straight up man to man and had some success. 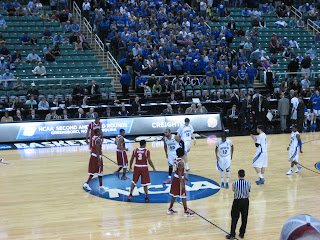 Creighton switched between a 2-3 zone and an EXTREMELY soft man to man defense most of the night, so they were able to pack the lane even when playing man and make it very difficult for us to get the ball into the post.  Despite that, JaMychal Green had a very good game.  He knocked down a few jumpers, took care of the basketball, and avoided picking up stupid fouls.  Most importantly, I thought he played excellent defense on Creighton's big man. 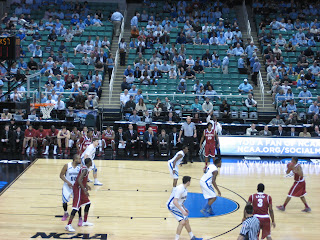 We actually shot the ball from the outside fairly well, and were able to take a 10 point lead in the 2nd half.  You knew that lead wasn't safe against a team as explosive offensively as Creighton.  While we held their star player to "only" 16 points, he created a lot of scoring opportunities for his teammates.  He moves very well without the ball, and they have great chemistry overall as a team.  They ran quite a few scissor plays, and their executions on the screens and cuts to get open, high percentage shots when needed was fun to watch (or would have been, anyway, if they weren't playing us).  They also did a good job of exploiting Nick Jacobs, forcing him to guard away from the basket which opened up the floor for them. 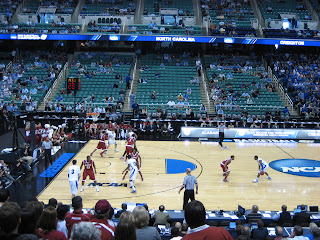 I really thought Rodney Cooper would be a good option to defend McDermott and pose some matchup problems for them.  4 fouls in 4 minutes proves why I am writing on a blog instead of coaching basketball.  Coop gets the Reggie Rambo award for his efforts, and I'm sure this experience will help him next year. 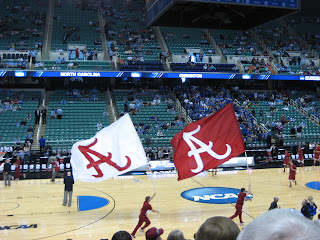 I was somewhat surprised Engstom did not get into the game, but Green was playing a good game and staying out of foul trouble, and doing a great job on the defensive end, so there really wasn't a good time to put Carl in the game.  I do have one minor complaint regarding our substitutions this game, Trevor Lacey made a 3 in the first half to tie the game and seemed to be finding his groove, but was immediately taken out.  Creighton promptly went on a 6-0 run.  Lacey knocked down a couple more treys, and I am really looking forward to watching him play next year.  I think he can be a dynamic scorer for us. 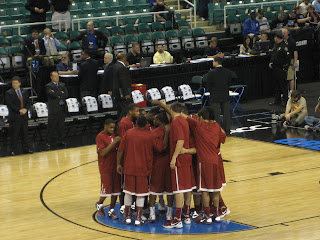 Levi Randolph only scored 7 points, but I thought he played a great game, other than missing a couple of key free throws late in the game.  He was all over the court playing defense, disrupting Creighton, getting rebounds, etc.  He brought a lot of energy when we needed it the most.  I also thought Releford had one of his better games this year, especially considering how difficult it was for him to get to the rim on the drive against the very soft man. 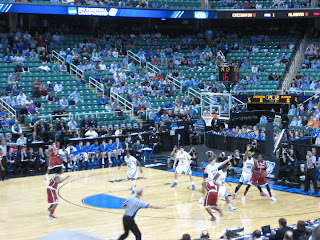 It was an excruciating loss, but what an amazing college basketball game.  This is why the NCAA tournament is greatest event in all of sports, in my opinion. 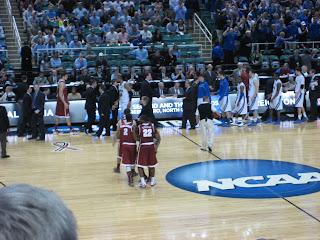 There were a few key plays that prevented us from pulling it out.  Levi's missed free throws, and our free throw shooting in general.  We were only 6 of 12, if we shoot our usual percentage, we get the win.  In fairness, Creighton was awful at the line too.  Nick Jacobs failing to get the rebound on a Creighton missed free throw late, we fouled again and they made both shots.  Last but certainly not least, was our clock management at the end of the game. 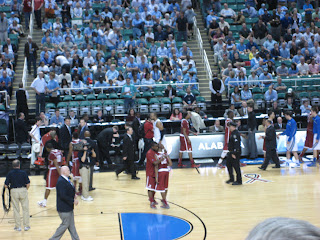 We made so many mistakes in the final 30 seconds in regards to managing the clock, I really don't even know where to start.  First of all, we took WAY too long to foul on Creighton's last possession.  We kept going for the steal, and didn't get it.  I understand going for the steal on the inbounds pass, but being down only 1 we were going to have a chance to tie at worst, so we should have fouled sooner.  We allowed them to run the clock down to 8 seconds, whereas they should have been at the free throw line with at least 14 seconds left.  The Jays cooperated by bricking them both, but we should have IMMEDIATELY called a timeout on the rebound.  If the Jays don't pressure the inbound, we could've rolled the ball up the floor or thrown a lengthy inbound pass to preserve a few seconds.  Instead, we run it up the court where Creighton wisely used their foul to give with 4.4 seconds remaining.  Creighton came out showing man to man but switched to zone when we inbounded the ball.  We had a play designed to attack the man to man defense, so Coach Grant immediately called timeout, now with only 2.4 seconds remaining.  I understand you don't have time during a 60 second timeout to design separate plays for every imaginable defense you might see, but the players should be able to recognize the zone and go with their base zone offense at that point.  Worst case scenario, we should have been able to at least get a long, but open shot up over a zone.  Any of these options would have been better than taking a side out with only 2 seconds left. 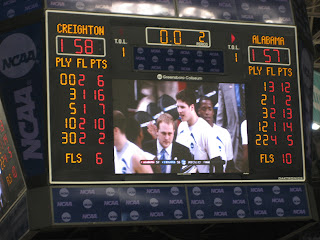 Nevertheless, Releford was fouled, badly, and should have shot 3 free throws.  At the time,  I said we would not get a call in that situation, especially if it looked like we were trying to draw a foul, and I think that was the case.  But still, when it effects the shot to that degree, I think it should have been called, especially considering JaMychal Green was also pulled down on the play without a call.  I doubt Green would have had time to catch the ball and get a shot up anyway, but we will never know.  It was good to see the entire team immediately run over to Releford to pick him up, as he was visibly upset that he didn't hit the game winner.  It wasn't his fault, the play wasn't designed to go to him anyway and he was fouled.

We had a decent crowd there.  Our one section of the lower level was mostly full, and there was some Crimson scattered throughout the rest of the arena.  Creighton's section was also full, but I did not see any of them sitting anywhere else.  Still, considering the size and proximity of the respective Universities, I would have hoped we would have a little bit more of a "home court" advantage than we did.  The Bama fans that were there, were loud and into the game for the most part.  Of course, the overwhelming majority of the crowd was in Carolina blue.


It was a great atmosphere for basketball.  The arena was very nice and easy to get into and out of.  I wish we had their cops to direct traffic in Tuscaloosa, they did a great job.  All of that being said, Greensboro is a crappy town.  I understand they have a long history of hosting tournament games there, but I would much rather be in Charlotte or Raleigh.  The silver lining in the loss was getting to come home today, instead of spending a whole weekend in that hellhole.   In fairness, I was exhausted and not in a great mood by the time we got there.  Thanks to a wreck on I20 in west Georgia, we didn't arrive until 2:30 am.  This after narrowly avoiding a group of 3 deer in East Georgia that likely would have killed us.  Three hours after going to bed, I had to be awake to take care of an important work related matter before the game.

We stayed and watched the first 30 minutes of the Carolina game.  The lower part of the arena filled up but the upper level was only half full, if that.  Their fans were generally knowledgeable and very complimentary to us, and it got loud in there while the Heels were on a roll.  Still, it's hard for me to imagine there would have been that many empty seats if Kentucky were playing an NCAA tournament game that close to their campus.  UNC is fun to watch, they run and get their shots up quick, and are very athletic.  Their baskets seemed to come easy while Vermont's band of Caucasians had to work hard for everything they got.  Still, the Catamounts somehow kept it respectable most of the game, thanks to UNC missing a number of easy shots.  It was obvious the heels were not on their game.

As for the season as a whole, we started off overrated, but briefly looked like we might live up to the hype.  We had some self inflicted adversity that very easily could have wrecked the season.  We broke the 6 year drought, and that should keep the program's positive momentum going for now.  We need to recruit a big man (hopefully Pollard) and it would be nice to find a pure shooter assuming Tony Mitchell doesn't decide to get his head out of his ass and come back with the right attitude.  The season was a success, but still a little disappointing.

And as good as Roy Williams of UNC is, ... Anthony Grant makes more than Coach Roy Williams!

uuuh, no he doesn't.

got fried now has the media reminding him of his player's foul situation in the form of questions at the half.

it's bad when you have members of the media propping you up.

(got fried should be used to it though. he benefitted from it for 11 seasons in tuscaloosa)

.
If you compared all the basketball teams in the country, and focused on the teams with the significant Minutes played by Freshmen and ranked such teams according to RPI,
WOULD ALABAMA HAVE A #2 NATIONAL RANKING by RPI among teams with heavy freshmen contribution, minute-wise ?

So,
Congratulations to Coach Grant and the Crimson Tide for its successful season, against all odds !

((Now let's worry about Bama being DEAD LAST in the cellar of the SEC in volleyball, men's track and field, and women's basketball, and perhaps baseball and men's tennis.... I can't stand it when UA is at the bottom, and the SEC expansion next year will put us farther from the top.)

Yep, it was a bad 1-pt loss to a 25+ win team that was one of the best teams in a underappreciated conference. Yep, yep, yep, horrible loss.

Thanks for sharing, well ! Basketball is a very familiar sport that is being played all over the world. To play basketball first learns the rule of the game. Bestbasketballmall is the Exclusive website for NBA or National Basketball Association.
http://www.bestbasketballmall.com/