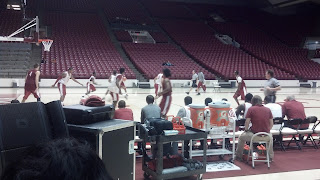 Being a creature of habit, I went to my usual seats for the scrimmage Saturday afternoon.  Overall, it looked a lot like last year's team.  Great effort and intensity, a lot of defense, not much in the way of offense or shooting.

They played two 20 minute halves, with some of the players switching from one team to the other according to how the coaches wanted the matchups.  Coaches Hipsher and Brannen coached the individual teams, while Coach Grant would come over and address individual players or teams during breaks or timeouts.

The score was 20-20 at halftime and I believe it ended up 42-38 if I recall correctly.  Granted, they did not stop the clock on all dead balls like they would in a real game, but those scores are fairly indicative of how it went.

First the positives, for the entire scrimmage we ran 2-2-1 and full court man to man defenses.  As a result, it was a fast paced, full court scrimmage.  The problem with these intersquad games is by definition if one aspect of the game looks good, another is going to look bad.  Without the band and PA there, I could sometimes hear what the coaches were saying in the huddle.  Every time that I was able to hear Coach Grant, he was addressing a defensive issue.  It's clear that Coach Grant puts a heavy emphasis on defense, and it shows.  You can't ask for any more than what we get out of our defense.  Unfortunately, it also shows in our inability to score.

Nick Jacobs looks much improved to me.  He appears to have slimmed down some and this should help him get off the floor and improve his rebounding.  Moussa Gueye looks stronger and quicker, and he had a couple of blocked shots, but he is still not as instinctive or aggressive as I was hoping.  Carl Engstrom did not have a very good day.  It seemed like he was called for about 8 fouls.  The sophomores are all playing with a lot of confidence, especially Levi Randolph.  Trevor Lacey will be able to help us some at the point and he looked a little quicker in driving the lane.  Retin is a huge upgrade over Eblen at backup pg.  He is quick, plays solid on the ball defense, and can actually make a mid range jumper or layup.  Obviously, he doesn't have Releford's skill set, but he should be an adequate backup PG.

One can tell Devonta Pollard is very athletic, but he's still obviously a true freshman.  I expected him to be a little more bulky than he is.   As far as size goes, from my perspective he seems to be one of those "in-between" position type guys.  A little too lanky for the wing, but not quite big and strong enough to hold his own in the low post.  He took several bad shots and was out of position a few times which led to turnovers.  I've read a lot of people comparing Pollard's athleticism to Tony Mitchell.  At this point, I do not see him having that same explosiveness.  All of that being said, he definitely showed some flashes.  He has some moves in the post and some quickness, and did a good job of rebounding.  He is able to get to the free throw line, but needs to work on his free throw shooting.

During the 40 minute scrimmage I think we were 2 for 12 from three point range.  After the 40 minute scrimmage, however, we held another 20 minute scrimmage where Coach Grant would stop play ever 4 or 5 plays to draw up the next set and set the defense.  This was more of a half court style of scrimmage against a 2-3 zone or a man to man.  We actually shot the ball A LOT better in this part of the scrimmage.  Lacey has a smooth shot, and when he shoots it in rhythm he can be almost automatic.  I can tell as soon as he lets the ball go whether or not it is going in.  When he misses, it's either because he doesn't get his feet or set or he has a little hitch in his release.  Randolph  still has that unique looking shot, but he's shooting it with confidence and he was able to knock a couple of them down in the half court sets.

Keep in mind, they are only about a week or two into practice at this point.

I know you cannot tell from the picture, but it was actually fairly well attended considering the lack of publicity and other homecoming activities going on at the same time.  I would say there were around 1,000 or so there, but they were all on one side.  As an example of the lack of publicity, when I left the scrimmage I met up with my Dad to go in to the football game.  He asked, "have you been watching Florida-Georgia?"  I said no, I've been at Coleman watching the bball scrimmage.  He said, "Oh, I wish I would have known they were scrimmaging, I would have went."  I would imagine a lot of people were the same way.  It takes more to promote a basketball program than a website and a twitter account, but I digress.

Tomorrow evening they will have another practice/scrimmage for Tide Pride and Tuscaloosa tip off club members.  I will try to attend and post a report at some point this week.

Agree about Retin. I was impressed by his defensive play. Hopefully, Levi and Trevor can hit shots against zone defenses the way they did Saturday. We really need Cooper to step-up his 3 pt. shooting.

I think your analysis is pretty much dead on. I was very impressed with Retin. I didnt expect him to be that good, but he is going to be very solid in relief of Releford. I thought Jacobs played very well. The Swede looked horrible. That might be one reason Jacobs looked so good. Moose looked to be in much better shape, he has slimmed up a lot and looked quicker, but still is not very aggressive and you could tell the guards still dont have much confidence in him because he rarely touched the ball. I also talked to several people that had no clue that the scrimmage was going on.

I forgot to say anything about Pollard. I was slightly dissapointed in his play, although i realize it is only the second week of practice, but as of right now I think he will be coming off the bench at the beginning of the season. He looks to be strictly a small forward. He is not big enough to guard a post player or play in the post at this point like Mitchell could when we needed him to do so (or when he had the attitude to do so). Pollard needs to gain about 20 pounds of muscle.

It's surprising to hear the somewhat disappointed feedback about Pollard. He was a guy who I thought could come in and be an instant impact kind of guy. If he is indeed going to need some time to develop, that puts more pressure on Jacobs (nice to hear he appears to have improved) and Gueye/Engstrom to produce in the paint.

I heard Andrew Steele did not participate in the scrimmage. Does anyone know why?

I was at Bama vs Miss State but I missed the scrimmage because of all the different homecoming parties and tailgates I had to go to over the course of the day. I wish they had done the scrimmage on Friday evening like around 7pm or something.

Anyways it's great to see such a detailed report on things, I almost feel like I was there.
I agree with you on Lacey, he has such a smooth shot and I know its only a matter of time before he is comfortable enough with the speed of the college game to hit a good % of his 3s. He looked like he was headed towards that at the end of last year.

A little disappointing to hear that Pollard wasn't as explosive as you thought, but I never expected him to be a force inside like Tony was because to be straight up he is really skinny.

Jacobs will need to really step up this year because he is pretty much our only threat inside. Our two centers may score 50 points combined the entire season.

That being said, I think our offense will be improved from last year. If Releford and Pollard can be strong slashers we will get open looks for Lacey and Randolph who proved last year he is capable of hitting from range.

All in all though, I think Jacobs is the key.

Regarding Steele... It is reported he was a little banged up, but nothing serious. Should be able to go in a couple of days.

Obviously it's early, but 2-12 from 3 pt range AND replacing Green inside kinda bothers me. Does Coleman need new rims or a softer basketball?