First of all, I apologize for the delay in posting the recap.  Other obligations have been keeping me busy.  Hopefully Bobbyjack won't fire me, as I don't know how I would handle the loss of income.

It's hard to tell anything by these exhibition games, as we generally use them to experiment while our opponents play very determined basketball.  UAH has taken us down to the wire the last couple of years, and frankly, even though they may have beaten us, I wish we would have played them this year instead of Stillman.  Their style would have better prepared us for the Jackrabbits coming in tomorrow night. 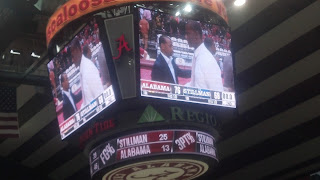 Our starting Five was 1. Trevor Lacey, 2. Levi Randolph, 3. Rodney Cooper, 4. Devonta Pollard, and 5. Moussa Gueye.  Yes, you read that right, Releford came in off the bench and Lacey started at the point.  Coach Grant just wanted to experiment with Lacey getting some more time at PG.  Also, Retin Obasohan was out with a finger injury, Andrew Steele was out with a groin, and Carl Engstrom did not play due to a foot injury.  This left us with only 7 scholarship players and allowed walk on Dakota Slaughter to get some meaningful playing time.

The game was ugly.  We played good defense for the most part, mixing up our full court press and man to man defense.  The biggest question I had after watching a couple of practices was our inside game.  Gueye did a good job on the boards and playing defense, but he's still not quite there yet defensively.  Nick Jacobs, conversely, could almost score at will in the post, but gave up way too many baskets on the other end against inferior opponents.  Despite slimming up some from last year, he's still not as quick to get off the floor as I would like.  If we could somehow combine the strengths of Jacobs and Moose, we would have a beast on the low block.  While Gueye scored 14 points, they were mostly on put backs.  Also, it seemed several times he had position but our wing players didn't have trust in him to feed him the ball. 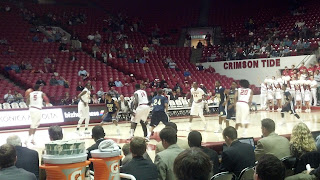 We made one three pointer this game.  We didn't shoot it much, because they were playing aggressive D most of the night, but we also passed up some open shots against the zone.  We had a size advantage down low that we were trying to take advantage of, and we did to an extent, but the rebounding margin probably should have been greater than it was.

We had way too many turnovers and trailed by 1 at halftime.  The second half was a little better as we built a 13 point lead, but Stillman made a run at cut the lead to 5 in the final two minutes.  #10 from Stillman was impressive shooting down the stretch.  We missed way too many free throws to let them back in the game, but thankfully Stillman could not make their free throws either. 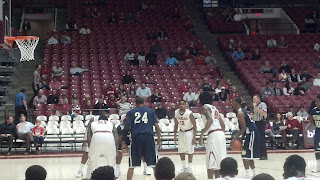 I know it was only an exhibition, but free throw and three point shooting will have to be much better if we are going to have any success this season.

It was a very small crowd, maybe about 2,000, only slightly more than showed up for the Tide Pride BBQ scrimmage.  Most of the basketball marketing I have seen only refers to the season "starting" against South Dakota State tomorrow night, it's possible they didn't want too many people to see this game.  I'm sure it being election night hurt attendance as well.

Up next, the season opener and first game of the 2k sports classic tournament, which isn't really a tournament, tomorrow night at 8pm Central in Coleman Coliseum against the South Dakota State Jackrabbits.  SDSU finished with an RPI of 50 last year, made the NCAA tournament as a 14 seed and took 3 seed Baylor to the wire.  They return most of their team, and they have a bunch of guys who can shoot, these types of teams usually give us fits.  We will need a good crowd, and hopefully it being a Friday before a football game will help.  If you can't make it to Tuscaloosa, the game will be on ESPNU.
Posted by DJC at 6:02 PM

"Hopefully Bobbyjack won't fire me, as I don't know how I would handle the loss of income."

Don't forget the car and the beach home.

And stock options... don't forget that.