A solid early season win on a neutral court over a decent team.  It started off somewhat sloppy again, with us playing from behind much of the first half.  Once again, Releford did not start, but he came in and had a huge game off the bench.  When he finally finds his way out of the doghouse and into the starting lineup, allowing Lacey to move over and start at the 2, I think we will see a big improvement with our early game struggles. 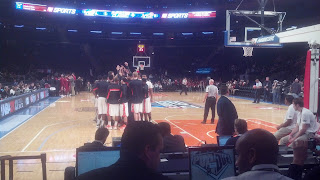 As expected, we had trouble with their inside game, but they also made some big 3s early in the game to put us in a 5 point hole.  We fought back to take a slim lead into the half, and then came out with more energy in the second half to take a 15 point lead.  While we were overmatched in the post, they had no answers for Releford and Lacey.  Releford had some great moves getting to the hole, and it was hilarious watching him smile at Starks while playing defense every possession after schooling him on offense.  As a side note, after all these years it is still fun seeing guards with the last name Starks lose in Madison Square Garden (Sorry Bobby).

Unfortunately, once we got the 15 point lead we seemed to take the pedal off the gas on offense.  Some of the credit belongs to Oregon State for making some defensive adjustments.    They prefer to play a man to man, and did most of the game, but they switched it up to a zone and a half court trapping zone for a few possessions after our run which seemed to throw us out of rhythm.   We also missed some key free throws that helped aid the Beavers come back.  Thankfully, we continued to play scrappy defense so despite going on a 7 minute scoring drought, it took Oregon State the remainder of the half to come back and tie the game.

Engstrom and Gueye did a serviceable job defensively despite being overmatched, and Carl even contributed with a couple of baskets before fouling out of the game.  Nick Jacobs was as we have come to expect, pretty good with the rock but disappointing defensively.  Pollard had a rough night, and Retin barely saw the court.  Oddly enough, Dakota Slaughter even got into the game for a brief moment before halftime. As the season goes on and Pollard gets more experience and adjusts to the game, our depth will improve.  I still think Retin will play a meaningful role on this team too before all is said and done.

Coach Grant did a nice job of managing the last minute or so of the game, and give the team credit for not panicking.  Rodney Cooper came up huge with the game winning 3 with 12 seconds remaining. 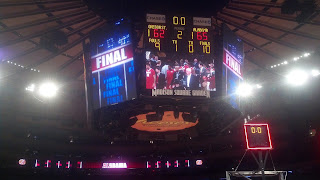 I said this a couple of years ago when we were here for the NIT, but Madison Square Garden is a great place to watch a basketball game.  I had awesome seats right behind the basket, I was pro.  bably 12 feet from the baseline.  I am in the same row tonight but closer to the goal.  You can really appreciate how great of a shooting background it is, and it's no wonder some of the greatest to ever play the game consider it their favorite venue.  The concourses and concessions, etc are all very nice and first class.  My only complaints are that it's not very well labeled at all, you have to go up to the middle level before coming in to go back down to the floor seats, and I don't like how the teams come in and out of the same tunnel, as that seems like a recipe for disaster.  I am hoping we will be the home team tonight so I will be closer to our bench and band, I was right next to the OSU bench last night.

The crowd was very sparse, but was starting to fill up towards the end for the Villanova-Purdue game.  I would say our crowd was split close to 50-50 with the Oregon State fans.  In a city the size of New York, most D1 schools will have a solid local alumni base.  From the people I talked to before and after the game, I got the impression most did not travel here.  The OSU fans were decidedly more vocal than ours,  I would imagine it sounded like they had us badly outnumbered on TV.  I've always liked the Beavers due to the Mike Riley football connections, but I'm sorry to report their fans were generally obnoxious.  A group sitting behind us was unnecessarily disrespectful to our players for most of the game, and after we made the game winning shot another group of them started a "Johnny Football" chant.

Up next, we take on the Villanova Wildcats for the championship in about 3 hours.  They came from behind to beat Purdue in overtime last night.  It will feel like a road game tonight.  When I left after the conclusion of our game the Villanova fans were filing in.  Both Nova and Purdue each already had more than 4 times the number of UA and OSU fans combined at that point.  Purdue travels well and Villanova plays here a good bit, being just a short train ride away in Philly.  I'm off to the UA NYC alumni pregame party then on to the game.  Due to travel and other obligations, I probably won't be able to post a recap until sometime Sunday.

The fact that opponents seem to have no problem getting the ball into the paint offensively and scoring around Gueye, Pollard, and Engstrom is very alarming to me. Although defensively, Bama did very well statistically (somehow).

And our high rate of fouling is also disturbing. Foul trouble is going to cause us to lose some winnable games this season, I fear.

And the terrible free throw percentage is shocking from the Villanova game.

For Bama to win over some big-name schools from major conferences is thrilling for us, but the question remains about how truly good or bad are OrSU and V'Nova. I hope they can emerge at the top of their conferences in order to help Bama's RPI, but they both have some work to do.

Ok so my apologies for the non baskeball comment.

BUT OMG
Stanford and Baylor!!
WoooHooo!!

"Ok so my apologies for the non baske(t)ball comment."

it is funny to watch the noose of a #1 ranking tighten around these second tier football schools. k. st. absolutely choked. a normally infrequently penalized team made mistake after mistake last night. part of the reason for their formerly undefeated record was their defense. yet it crumbled under in the spotlight, exposed by a 4-5 baylor team. in the post-game news conference snyder was bumfuzzled as to his team's failure to perform.

ditto oregon. all they had to do was win at home over a 2 loss, "old man football", no andrew luck football team. they were held to 14 points and couldn't manage a field goal in OT.

it truly illustrates the pressure of getting on top and staying there. while i'll never doubt Coach Saban would have loved to win them all, i'll guarantee you he's loving having the aTm loss in the recent past going into the auburn game, sec championship and bcs championship as a #2.

and i'll also guarantee the tv networks are salivating over a notre dame/bama match-up over a nobody-cares kansas state/oregon game.

again alex, no need to apologize.