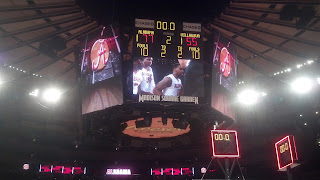 Trevor Releford replaced Devonta Pollard in the starting lineup, and responded by going 5 for 5 from downtown and leading us to a championship victory with 25 points.

I read a lot of comments following the Purdue-Villanova game about how we needed a tightly officiated game given how physical the wildcats were in the first round.  As it turned out, the quick whistles were to our detriment, as we got into a ton of foul trouble in the first half.  This is something we will have to deal with from time to time given our style of play and level of aggressiveness on defense.

We played the final 6 or 7 minutes of the first half without Lacey or Releford on the floor.  With six minutes left i told a UA fan sitting near me that I feel really good about things if we can keep it within 5 or so at halftime.  The lineup of Retin, Levi, Coop, Devonta, and Moose did a great job, especially defensively, to get us into the half with a 3 point lead.

Nova scored the first 2 baskets of the 2nd half to retake the lead, but the Tide dominated from there, cruising to a 20 point win.  They had all sorts of problems with our press and give Coach Grant credit for being willing to play more zone than he would probably like to slow down their post players.  Rodney Cooper had another good game with 17 points.  To win this easily when Lacey didn't even score his first points until 7 minutes remaining in the game was impressive.  Retin did a great job at backup point guard and is finally starting to show some of his potential in that role.  As I mentioned earlier, his play late in the first half while Releford was on the bench was a huge factor in the win. 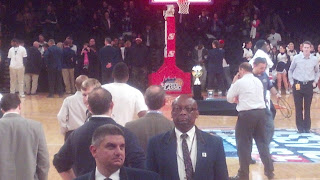 Despite my reputation of being one of the biggest homers around here, I am going to caution our readers to curb your enthusiasm a little bit over this hot start.  Sure, it's great to be undefeated and bringing home the hardware from a neutral site tournament, but I fear this may be a "good names bad teams" situation.  Frankly, Purdue and Villanova just do not look like good basketball teams to me at this point, and Oregon State is decent but far from great.  It will be interesting to see how many, if any, or these teams make the NCAA tournament.  That being said, the team is playing with good chemistry and having a lot of fun right now.  You could see in their smiles how much they enjoyed getting their pictures taken with the trophy while Frank Sinatra's "New York, New York" played in the Garden after the game.  A group of fans, myself included, stuck around after the game to congratulate the team as they left the court to go into the tunnel.  Moussa Gueye went out of his way to shake hands and give high fives to all the fans.  Coach Grant also thanked us for being there.

I have heard a lot of people express concerns over Devonta Pollard.  People expect a 5 star recruit to come in and produce at a high level immediately, but those are not always realistic expectations.  Pollard is going to be fine, he's a great athlete with a great attitude and he is working hard.  It's a long way from Kemper County, Mississippi to playing major D1 basketball.  This is the first time, probably in his life, when he has had to play the game without being, by far, the best player on the court.  As a result, it's the first time he has had to actually think about what he is doing on the court.  That is not a statement regarding his intelligence, but pointing out that he is having to take a completely different approach to playing the game.  I still expect him to be a solid contributor for us by the end of this season, and a star player next year.

We had more fans there for the championship game than we did Thursday night.  I would estimate 250 or so.  Villanova did not have as many as I expected them to, I would say maybe 4,000 or so.  They were not very vocal and it was never a road game type atmosphere like I feared.  Most of the 'Nova fans I encountered were pleasant and nice.  I met one Nova fan Thursday night who claimed that his brother, Ray Abruzzese, played for Coach Bryant and was Joe Namath's roommate.  He said he had some stories, as I'm sure you could imagine.  The Nova fans sitting behind us had some unkind words upon their departure late in the game, but they were probably as annoyed as I was with listening to a couple of ignorant Alabama fans that were sitting nearby in our section.  These people embodied every negative stereotype about the south, including criticizing the selection of Anna Swanson as honorary captain, because the wounded war veteran who happens to be an African American female Tide fan originally from Georgia, was "not Alabama enough."  I cringe at the thought of those nimrods walking around NYC all week purporting to represent our University.

Chris Stewart was on my flight back to Birmingham Saturday morning, and I had the pleasure of chatting with him at Laguardia and DTW airports.  He's a very nice guy and in my opinion does a great job on the radio broadcasts.   He is very high on Coach Grant and excited about Jimmy Taylor and Shannon Hale coming in next year.  He said he thinks we are going to be a very dangerous team in the near future under Coach Grant when everything comes together.

Up next, Charleston Southern comes to Coleman Coliseum for a 7pm tipoff on Black Friday.  Hopefully a lot of fans in town for the Bama-auburn football game will come out and support this basketball team.

When we put this tournament on our schedule i thought it would be very important for us to win it with a young squad that needed some confidence. Although, Nova/Oregon states are not top tier opponents they are still very good teams, and probably would be somewhere in the middle of the pack in the SEC although its hard to tell this early in the year. If our guards/forwards can keep playing the way they have been we can have a very good year because they are making up for the lack of post play. Lacey/Releford/Cooper all three look very confident in their games and Steele/Randolph are bringing the same intensity and consistency they brought last year. I think all Pollard needs is to knock down a few shots and it will help him to not be as tentative, and get more on the aggressive side. We should be 6-0 heading to Cincinnati. I hate to drink the crimson kool-aid but if we could pull off a win there i think we could be undefeated or have one loss going into SEC play.

I too think we probably only have one loss going into SEC, but if we do drop only one then it surely is to Cincy. I've been able to watch parts of two of their games now and even though its been against bad competition they have been absolutely dominant. They have dominated their weak opponents the way Alabama dominates their cupcakes in football. If we do go up there and beat them I'll be doing flips but I really just don't see that happening.
I am impressed with the start though and I think we win 23-24 regular season games this year.

" I am going to caution our readers to curb your enthusiasm a little bit over this hot start. Sure, it's great to be undefeated and bringing home the hardware from a neutral site tournament, but I fear this may be a "good names bad teams" situation"

there's one here who, ahem, EXPECTED us to win this tournament.

we would have beaten o st by more were it not for the officiating in the second half.

i'll admit watching 'nova and purdue and thinking we should beat either of them. but this IS a big deal for this team. hopefully, with the dumbasses gone, we can make some real progress from here on.

i know i'm EXPECTING it to happen.

Pollard's going to take a while figuring out CAG's Offense. This is Grant's fourth season and the rest of the guys are just now figuring it out.