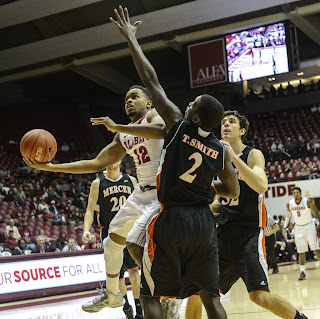 I had a bad feeling about this game, so I took a nap staring about 20 minutes before tip off.  When I woke up, there were about seven minutes left to play and Bama had a 5 point lead.  That was when I knew we were in trouble.  As was said a day or two ago, we should have curb stomped this team.

I watched my recording of the entire first half and the first 6 or 7 minutes of the second half.  That was all I could take.  Not being able to find a box score to confirm my gut reactions, I will trust others to correct my errors.

Once again, we do not have anything that looks like a half-court offense.  When the kids move, they don't look like they know where they are going and they are more likely to amble or lope than that are to sprint.  They do not seem to know what they are supposed to be doing when they are not executing a half-court trap or fast break.

We desperately need Nick Jacobs to heal or for Moussa Gueye to find some talent because we have no presence underneath the basket on either end of the court.  Jacobs' performance is excusable due to his nagging injury.  Gueye apparently is exactly what he appears to be right now.  To his credit, he appears to be playing to his potential.  With all due respect to the coach and the team, we need a talent upgrade at that position.  He cannot score nor can he defend on anything like a consistent basis.  Jacobs is not well and Pollard does not have the body for the job.

When the three point shots do not fall and the other team does not turn it over, this team struggles to score.  Even when the team defends well, it cannot rebound.  Are Lacey and Cooper our leading rebounders?   I would not be surprised to find out they were.  None of this is acceptable.  I am nowhere near ready to pull out the pitch forks and torches, but Coach Grant needs to put a more talented and better coached team on the court.  I'm sure he is aware of that too.  I hope he has a plan to accomplish both objectives.

The blame has to start with coach Grant, it just has to, I have defended him, but his seat is hot right now, and it should be, it is year 4, and we are irrelevant, and things are looking bleak as far as our future goes. CAG looks like he has no idea what he is doing, and to say otherwise is ridiculous.

Look, we simply don't have the complete package in personnel. Be excited about next year, and be hopeful that the two new post players, Hale and Taylor, are working on becoming unstoppable offensively, as the current Crimson Tide sophomores and freshmen of this year mature.

Coach Grant has gone after multiple big-time recruits, but they are being lost to so-called basketball schools or the recruit's local college. Within State, the selecions are just not available to the level that we all desire.

In this Mercer Game, the rebounds for Alabama were statistically spread out as 5 different Crimson Tide players had numbers of within 3 rebounds of each other, led by Cooper's 7. This team is just not a complete package in personnel, and there's a great opportunity available for a superstar recruit to come and make a huge contribution.

Alabama's big lead in the first half was pretty achieved by Points-off-Turnovers. But when the opponent no longer turns the ball over, our point production seems doomed. This happened in the 2nd half.

Coach Grant expressed his initial reaction after the game as the Team not having enough passion, not enough togetherness, not enough energy, not enough effort, as the 2nd-half lead slipped away. Sorry to be pessimistic, but I just think we don't have the personnel. To me it seems that the lack of balance between inside+outside offense is the cause of the Bama Guards holding the ball to the final seconds of the shotclock. This imbalance is why Alabama only had 9 Assists. When a Game is in the final two minutes, I really don't want the ball to be in the hands of our current in-the-paint players, but yet that's where we were going with fruitless results at the end of the game.

Mercer's 6'10" Center (Coursey) scored 20 for a career high. I bet all the SEC's other Centers can't wait to play Alabama!!!

Also, Mercer's senior Guard, Travis Smith, hit 5 of 7 three-pointers, many of which were wide-open attempts, (although some were designed off screens), while our own Trevor Lacy was 0 for 3. Just 3 attempts from Lacy? I don't why. He sure was nailing them from the previous game, but I don't remember if Mercer put extra effort defensively against Lacy, but we sure did need some defense against Smith's shooting.

And it was disgusting how many easy dunks Mercer had. This team's defensive tactics in the paint are in critical need of attention. Opponents are able to get entry passes into the lane near the basket with ease. Gueye and Cooper and others include pushing as their defensive technique, resulting in fouls, and they look completely baffled and clueless as to whether shoving and pushing opponents are fouls.

No, if Alabama continues in this tailspin, there will be no "next year" with Anthony Grant, this is year 4 and Alabama is irrelevant, wait 'till next year just wont fly anymore.

from Don Kausler of the b'ham snooze:

"He said the Tide’s loss had nothing to do with talent.

“That was more effort, focus and pride in performance,” Grant said. “It’s frustrating right now as a coach to admit that. It’s embarrassing, really, to admit that.”

i mean, four years, how many million dollars, and we have a coach that doesn't know how to use his bench to motivate players.

i could deal with losses due to benching, what's the word i'm looking for here..........of yeah, ENTITLED attitudes.

i guess i grew up in an alternate universe. when i played, if you didn't hustle, you didn't play.

guys, i've seen these situations before, here, recently. there was pressure on grant last year to make the tournament. protest all you want but it doesn't change the fact that green was brought back for NO OTHER REASON than to improve those chances. (and in the end, lackluster performances out of green and a one-and-done appearance)

now we have grant wailing and nashing teeth publicly about players under his nose failing to perform???

grant was sold to us as a tough-as-nails reformer. an experienced coach. i still haven't forgotten waiting a week for an answer from him while he eyed a possible opening a florida where he really wanted to be.

now four years later he's whining to kausler about his players not hustling.

and desperate coaches do desperate things, especially when there's no reporters around, often to the detriment of the program.

somebody needs to keep a close eye on this guy.

100% agree with Finebammer, Grant sounds desperate, if the team continues to struggle, Mal Moore needs to have a quick trigger, and not let Grant run the program farther into the ground than it already is. I will always love and support this Basketball program no matter what, but I do not like our coach, or the direction of the program right now.

We should have went after and hired Mike Anderson. I have said this from the start. Every team we have played has had better post players than we have. Yes, every team! How can you not recruit a post player in 4 years??? I was positive about Grant until now. There is no excuse to lose to a team like Mercer on your home floor. This could be the worst Bama teams in a long time if he cant get things turned around in a hurry.

Mike Anderson isn't exactly tearing it up at Arkansas right now, but yea i agree, Grant is not looking like the right choice, he is in over his head, and is completely clueless.

A real coach could take this same team and garner much greater success than Grant will ever be able to do. He is the coach or is at least getting paid to be the head coach. Leadership starts with the coach! If he publicly throws the players under the bus you can imagine what he is saying to them behind closed doors. He has to own up to his own failures and stop blaming the team.

Crimsontider....no he isnt tearing it up, but all of his losses were against pretty good teams and he hasnt lost to a team like Mercer in Fayetteville. Arkansas program was as just in bad of shape as Bamas was when he took over, actually Bama might have had a little more talent when Grant took over. All of Grants teams just look to have no identity and have that deer in the head light look on offense most of the time like they dont know what in the heck they are suppose to be doing.

agreed, Anthony Grant did inherit some talent, guys like torrance, brock, hillman, Green, Mitchell, Davis, hines. Anderson really inherited nothing, he'll be good, Grant is a dud, which is shocking because i really believed he was a home run hire.

Anthony Grant is the Gene Chizik without a national championship of college basketball.

crimsontider: Is someone paying you by the number of comments you leave?

I still bring it to everyone's attention that Alabama is among the youngest teams in America. How many junior and seniors for Alabama can you put in these Games of ours at this point ? Of course I want these freshmen and sophomores to play like NBA stars and never ever lose! Really?

Remember, I voted for Bobby Knight.