Winning for losing... Bearcats sink jumper at buzzer to win 58-56

Like every other Bama fan without multiple TVs in a room... I was flipping back and forth between the basketball and football game up until the 2 minute mark in Cincy. IMO we played a near perfect game, dictating the pace of the game, forcing bad shots, but like the LMU game in 1990 we fell just a little bit short.


I have to admit, I'm getting tired of Nick Jacobs fouling out. If he was in the game in the last 6 seconds I don't think that fadeaway jumper that buried us gets taken. Gueye... as much as he tries is slower than Adam Keefe and I knew once he was put in the position to defend we were in trouble.

I think I've been clear that I'm still on the fence on Anthony Grant, but a game like this endears him to me just a little bit more. Under the Gottfried regime we would've lost by 24.

We still have some serious issues inside, but I'm hoping the combination of our backcourt picking up the slack and how horrendous the SEC is hides that serious flaw.

Also, I had the pleasure of attending a game at the Pit in New Mexico. I wish Coleman looked 50% as good as this place does. The place was 90% full for a game against Mercer. 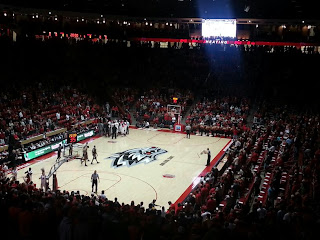 Posted by bobbyjack at 9:30 AM

I think if you toss out the 1st 10 minutes of the game where we got behind 17-4, it would have been a much different game. Early on the team had too many turnovers and weren't forcing many on the other end.

...and then that agonizing football game went into OVERTIME ! But perhaps that was a favor to us, because it spared the Nation from witnessing a horrible start ! By the time ESPN2 switched to Cincinnati, our Crimson Tide had already climbed back into striking distance and was earning the praise of the commentators.

The Victory slipped away. With about 10 seconds left in the game and a tied score (can't remember if the shot clock was an issue), Trevor Releford drove to the basket and got bumped in the hip area, but the officials didn't call anything and an errant shot attempt resulted. Cincinnati rebounded, and called time out with only 6 seconds left to play in the game with the score tied 56-56.

If only Alabama's Defense had done a better job of impeding the Bearcat Dribbler as he raced down the court against the clock's final six seconds. But he flashed right by Pollard at mid-court, and arrived near the Lane and launched that final game-winning shot with Nick Jacobs arriving a micro-second too late to block or stop the shot. Of course, the Bama Defense was trying to be careful not to foul.

Alabama was not being allowed to take any free throws, and the few that were taken were errant.

I'm convinced that if that game had been played in Tuscaloosa, we would have beaten Cincinnati by 10 points and would be undefeated at this point still.

this is a good team guys.

i'll say that again: this is a good team.

yes, our bigs have issues. but they're getting better. engstrom's knee likely cost us this game. it was hard for me to multi-task during the SECCG but cincy struck me as a big, physical team and we hung with them in their house.

it seemed late in the game like the score stayed 52-50 bama forever. i know we hit a scoring slump late.

but we had them scared. we're a good team. we're gonna beat kentucky. (did you see what baylor did?? in rupp??? i was very impressed with their courage. they were unafraid. i have been impressed with scott drew for some time now. could they lose both their football coach and basketball coach in the same year?)

it's a long season but if we can stay healthy i'm as excited about what we can do as i have been for some time.

on the SECCG: thank god Coach Saban saw the light and came out in the second half and used our best advantage to beat georgia, RUNNING THE DAMN BALL. and we still almost lost. a lot has been said about how evenly matched these teams were but personally, i didn't see that. had we come out in the first half, run the ball down their throats, this game isn't close.

there is no doubt in my mind we have the best head football coach in the country. but that first half was the worst coaching i've seen since Coach Saban came to tuscaloosa. the offensive adjustment in the second half won the game.

on to miami. got my ticket. if we do what we're best at, the season is gonna end looking much like it did at the beginning.

Proud of the BB team!
Hate it for Swede.
On FB: Nussmeier started the season strong, but has reverted to a west coast play calling pattern. CNS needs to reassert HIS strategy from the opening kick.

ESPN needs to do something about their piss poor scheduling. 30 minutes till tip off and the CUSA garbage football game was only in the 3rd quarter, so I decided to go ahead and get to my seats in the dome. You would think they would at least put the game on ESPN3 so that I could watch it on my phone at that point, but no. I saw very little of this game, thanks also in part to not being able to maintain a decent signal in the Georgia dome.

Cincy is a good team. I was concerned to see us down 15-4 early, but being able to fight back and keep it close in a tough road environment like that is encouraging. I saw it was tied and we had the ball with 44 seconds remaining, so I assume we could not hold for the last shot. I did see the final play, they hit a fadeaway contested shot, I had no problems with our defense there.

Disappointing way to lose, and there are no moral victories, but I'm encouraged we were able to keep it close. Hopefully Carl's injury is not too serious. With only 10 scholarship players, and already being weak down low, we can't afford any significant injuries at this point.

Actually, it was on espn3 as I watched it there before that AUful CUSA game ended. Like I said... if Jacobs is still in the game I doubt that shot goes off. He's got to stop picking up stupid off the ball fouls.

If it was on ESPN3, it wasn't on the mobile watchespn app, which is complete garbage most of the time anyway.

I can confirm that the game was on ESPN3, and they also put it on ESPN classic until the CUSA game finished.

Well, I have to say I am very proud of our team but gosh this one does hurt. I have all fingers crossed that we don't revert into slump mode like we did after Georgetown ripped out our hearts at this exact same point last season.
I think this team has more resolve though, but wow that victory could have been huge when it comes to a high tournament seed. Lets hope we can win out during the rest of the non conference.

So i went back and watched the end of the game. Releford was on that man that hit the last second shot coming down the court, but pulled off of him because he thought he was going to get screened. Why did he not catch back up to him? He had plenty of time to do so. The guy still hit a heck of a shot, but if Releford would have stayed in his pocket it might have been a different story. Also, why were we playing full court man on that last play??? There was only 6 seconds left. Why not pack the paint and make them shoot from the outside. Overall i was proud of the way the guys played. Cinci is a good team, and if we had played a better first half we would have won the game. Of course, if we had an inside game that would also help, but we all have beat that dead horse enough.

Jacobs seems to be regressing.
Pollard is starting play better.
Every game, he's getting stronger.
I'm with you on Grant.
I like Grant. I want the guy to do well at Bama, for many reasons.
This is a talented Team, the best Team in Grant's tenure.
We need to take care of business against Dayton.