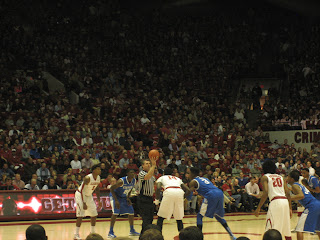 Going into this game, I thought the key would be our press.  I figured we would get killed with second chance points in the post, and would need to create a lot of turnovers to overcome that.  The game started almost exactly how I envisioned.  Bama not able to get rebounds and Kentucky playing sloppy and turning the ball over.  The Cats figured out our press and used their quickness and athleticism to break it with ease.  At one point, they scored 15 points in 4 minutes and were able to build an 11 point lead.  Nerlens Noel was swatting everything in sight, and Nick Jacobs appeared frustrated.  Our guards were not making any outside shots, and we appeared to be over matched.  The Cats went into the half with a 33-24 advantage.

Once again, the Tide turned in the second half.  We made some adjustments and played more half court defense, even matching up man to man.  Kentucky went over 7 minutes without a field goal while we chipped away and got back into the game.  Down the stretch, we made the plays on offense when we had to, but more importantly got the key stops on defense everytime the Cats got to within a basket.

The key to the win was Moussa Gueye.  Last game, I criticized Coach Grant for starting him and playing him nearly as much as Nick Jacobs.  This is why Coach Grant is earning $2 Million per year coaching basketball and I am volunteering to write on an obscure blog.  Moussa's defense was incredible.  He was credited with 5 blocked shots, but he prevented or altered many more.  He was a presence in the post that allowed his teammates to be more effective in other areas.  While we were still outrebounded, he held his own and at least kept it respectable against Noel.  He seemed to play faster and more aggressive than he has in the past.  With about 30 seconds left we had a 3 point lead, and I knew UK was going to drive to the basket hoping for a quick 2 or a foul.  As he did most of the night, Archie Goodwin came in out of control and was denied by Moussa.  That stop, combined with some made free throws at the other end put it away.    If we can get that kind of effort out of him every night, we will be difficult to beat.
Nick Jacobs was no slouch either.  He seemed frustrated for a bit in the first half, but then he decided to be aggressive and post up the Kentucky bigs.  He would not be intimidated by Noel, despite having one of his early shot attempts blocked.  He kept going to his strong moves and even crashing the board for a huge put back late in the game.  We all know he doesn't have the best vertical, but he did a great job of boxing out most of the night to get as many rebounds as possible.  Jacobs ended up being our leading scorer with 14 points.

I would have never imagined we could beat a much more talented group of players relying heavily on our bigs at both ends of the floor while shooting only 2 of 13 from 3 point range, but that is exactly what happened.


Releford had a good game with 13 points, made a big 3 during our comeback run, and found a way to get to the basket in some key possessions late.  Levi kept us in the game by making some mid range jumpers.  Cooper had an off night shooting, but his defense was a huge part of why we were able to win the game.  He shut down Wiltjer after he got off to a quick start.  Andrew Steele does not light up the stat book, but he clearly provides some leadership that the team needs.  It's hard to quantify what he brings to this team, but you can't question our record with him versus without him. 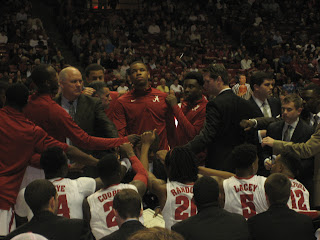 Kentucky is a great program.  They bring out the best in all of their opponents, and we were no exception.  They had more talented individual players at nearly every position on the floor last night, but we were the better TEAM.  A big part of that is maturity and chemistry.  Talented as they are, true freshmen will make freshmen mistakes from time to time, and Coach Cal knows he will have to overcome that.  It's no coincidence that while they are having somewhat of a down year, the conference is also in very bad shape.  Like them or not, the SEC needs a strong Kentucky.  We will need them to play up to their ability and make this win more impressive by selection Sunday as well.

Kentucky finds themselves in a very similiar situation to us.  We have identical records and RPIs in the 50s.  Our strenght of schedule ranking is actually slightly higher than theirs (33 v. 42) which is hard for me to believe considering they have played Maryland, Duke, Notre Dame, Baylor, and Louisville.  That just shows the importance of scheduling decent mid-major teams, and it's not always easy to figure out which of those teams will rise to the top.  The problem is, there are not many opportunities for quality wins remaining on the schedule for either of us.  If UK doesn't have any more bad losses, I believe they will get the benefit of the doubt due to being defending champions, and the name "Kentucky" on their jerseys will bring ticket sales and TV ratings. 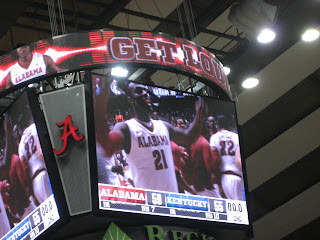 It was a packed house of 15,000+ and was as good of an atmosphere as we have ever had in Coleman Coliseum.  Kentucky brought a solid crowd as usual, especially for a mid week game with about 1,000 or so in blue scattered throughout.    The crowd was loud and into the game, and I think our players fed off of that in the second half.  The noise seemed to disrupt Kentucky's young offense at times as well.  As much as I complain about the marketing of the program, a win like that on national TV is the best marketing we can ask for.  I can't imagine anyone going to that game and not wanting to come back for more.


Up next, we go to Knoxville for a rematch with the Tennessee Vols Saturday at 2 pm EST.  We beat them in a close game a couple of weeks ago, and they will be out for revenge, so it's going to take another good effort.  The game will be televised on ESPN2 for those of you cannot make it to Thompson Boling arena.
Posted by DJC at 1:43 PM

I think we need to win 10 of our remaining 13 regular season games to make it into the NCAA tournament. A win over either Florida or Ole Miss would be huge because right now they both appear to be in very good shape to make the tournament. You might as well book Florida and Ole Miss would need a historic collapse not to make it.
Besides those two though, every team on our schedule SHOULD be a win for us. Of course, that is not how it usually happens but I do believe the fan base is behind this team now and we should have close to capacity crowds at Coleman for the remaining home games.

at this point preceding the game in Knoxville, we have SEVEN road trips remaining on the schedule.

Our Feburary schedule is terrible, really wish we could have gotten either Ole Miss or Florida twice, oh well, things are looking really good for Alabama right now, we just need to beat the teams we are suppose to.

I agree Moussa Gueye played his best game yet. Jacobs played well too.
Another point with Moussa, he is staying out of foul trouble and playing under control. No accident,
post play better...Alabama wins!

Those who voted for Alabama to be in last place in the preseason SEC polling appear foolish now.

Especially when Alabama had built up a 19-point lead over pitiful Awburn. Very proud of the Crimson Tide Women's Basketball team's accomplishment tonight !

The fact that I'm watching this basketball game with a bunch of UK fans.. I love UK but I bleed crimson.