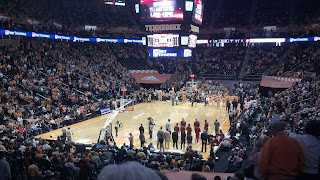 On the bright side, for once we got off to a good start.  We played great defense in the first half and took a 25-19 lead into the half.  Moussa Gueye even scored 6 points, amazingly making one of his baskets after dribbling 6 or 7 times.   I don't want him to make a habit of that, but it was good to see him contributing at both ends of the floor in the first half.

Unfortunately, all the progress we seemingly made with our post play in the Kentucky game was gone.  Jarnell Stokes made Nick Jacobs his bitch.  Jacobs had only two rebounds, 4 points (less than Gueye) and did very little slow down the UT big men.  If this team is going anywhere, we need the Nick Jacobs from the Kentucky game, not this version.  He was a major liability on both ends of the floor.

In the second half, Gueye seemed uncertain as to when he should go for a block and when he should focus on getting a rebound.  In fairness, there were many times when he went after the block, altered the shot, and UT got the board because one or more of his teammates failed to box out.  Tennessee out worked us on the boards and for loose balls all day.

Despite being owned in the paint, we played well enough defensively and made enough outside shots to have a chance to win.  We led most of the second half, always answering the Vols runs.  They would cut it to 1 or 2 and we would get it back to 5 or 6.  I felt like if we could have pushed it up to 10 or so we would be in good shape the way we were playing defense.  I also knew we would be in trouble if the Vols ever got the lead, which they eventually did.

There are going to be a number of questionable calls in every basketball game, it's just the nature of the sport.  It is a very difficult game to officiate, and the next official to call a perfect game will be the first.  It is unfortunate when one of those inevitable missed calls occurs on the final play of a one point game.

The rule of verticality says that a defender is entitled to go straight up once he has established position.  A lot of officials wrongly call fouls when a defender jumps straight up and the offensive player jumps into him.  In this case, however, Stokes did not go straight up.  He jumped toward Lacey when Lacey got him with the head fake.  As he jumped, he did maintain his arms straight up over his head, so perhaps that is what the official was looking at when he mistakenly made the no call.  I think a lot of officials have a tendency to go into a "it has to be obvious" mindset before calling a foul in that situation because they don't want to "determine the outcome of the game."  I would argue that by not applying the rules as they would in any other situation, they ARE determining the outcome.  It was fairly obvious that it was a foul, Stokes' body language seemed to indicate that he was expecting a whistle.  Lacey stood there in disbelief.  The officials looked at each other for a couple of seconds after the horn, before the PA announcer emphatically announced, "NO FOUL!  TENNESSEE WINS!"  When you have to announce the absence of a foul...it was a foul, it just wasn't called.

Another play that has not gotten as much attention occurred on a UT in bounds in their back court in the final minute.  I have not seen the replay, but at the time I thought their guard clearly pushed off of Releford to get open and get the ball in bounds.  This led to UT stretching the lead to 4.

All of that being said the officiating did not cost us the game.  First of all, we were 5 of 11 from the free throw line.  There is no guarantee that Lacey would have even made one of the free throws to force overtime, much less two to win the game.  If we get a few more rebounds, or make a few more free throws (Cooper missing the front end of a one and one late really hurt), then we aren't in that situation at the end of the game.

Also, I've read some criticism of Coach Grant on some other sites regarding the last play.  I thought it was a good play.  Lacey has some experience making game winning shots and has the confidence to be comfortable in those situations.  I don't agree with having Releford drive the lane looking to get bailed out, because as we saw, it's difficult to get foul calls in those situations.  We got the ball to Lacey in a one on one situation with some room to work with, that is not a bad situation, sometimes it just does not work out.

Tennessee had a pretty good crowd there despite their lackluster season thus far.  From where I was sitting, I could not see the upper level behind me, but based on what I could see I would say there was probably 13,000 or so there.  There was probably close to 500 or so Bama fans scattered throughout, you could see a bit of crimson in every section, and there was a good sized group sitting in the section right next to us.  The orange clad fans did not product much of an atmosphere, as the gym was mostly quiet until the last minute of the game when they finally started making some noise.  The UT fans we encountered were all very respectful and nice.   Also, it was great to see our fearless leader, Bobbyjack and his son, for a few beverages before the game.

Up next, the underachieving Arkansas Razorbacks come to Tuscaloosa for a 8pm tipoff Thursday night.  We have a history over the last couple of years of allowing close, disappointing losses to linger and turn into losing streaks.  We can't afford to let that happen here.

Rodney coopers three that was called a two, a missed goaltending the push off, A UT player taking 4 steps before making the shot with about 56 seconds left, and then of course Stokes throwing himself into Lacys body with 2 seconds left, and there was time on the clock when it went out of bounds! Fix was in, you don't have to be a genius to figure out that this was not an ethically officiated game, CAG, and Mal Moore can not let this go, they need to be on Mike Slives case about this. Black eye for the SEC and college basketball.

From the replay they showed at the game, it looked like Cooper was on the line. In real time, I thought it was a 3, but it was on the other end of the court and I wasn't looking at his feet. It's hard to think they would have gotten it wrong after looking at the replay.

I already mentioned the push off, and yes, that should have been a travel too, the goal tending could have gone either way. It seemed to me like there should have been some time left, but again, in any close game the team that loses can point to 3 or 4 calls as the difference. We got a few calls in that game too. It wasn't "fixed" or anything like that. Again, if Nick Jacobs shows up, we win the game regardless.

Yes, we could have made some more plays, but it is hard to win on the road in the SEC playing 5 on 8. And this loss is not Anthony Grants fault, I have been critical of him, but blaming Grant every time we lose is just taking the easy way. out. Is is t coach Grants fault we went 5-11 from the line? Is it Grants fault the refs decided to give UT some home cooking?

We're in agreement on Jacobs though, it seems his entire career it has been 2 steps foward and two steps back. If he could ever play to his potential consistently, we could be really dangerous.

CT- if you quote Paula Abdul lyrics again in your post I'm gonna have to ban you.

Good seeing you and dranking some beer before tip off DJC. I'll probably edit the post to add my pics from the cheap seats.

Note to all- If you have kids getting them to a Bama hoops game is a good way to get them interested. My kid is already asking me the next time we can see them play.