We got off to a great start.  The ball movement and spacing were great on offense in the first half, leading to several wide open 3's that we were able to knock down.  The made shots allowed us to get into the press and create some turnovers.  We also played very well in our zone, getting into the Carolina passing lanes and creating turnovers which led to fast break opportunities.  With a 32-9 lead with 5 minutes to play in the first half, it looked like we would have an easy win for a change.  We should have known better.

We got a little too complacent, made some unforced errors, forced some bad shots and allowed the Cocks to close the half on an 11-0 run to cut the lead in half at 35-24. 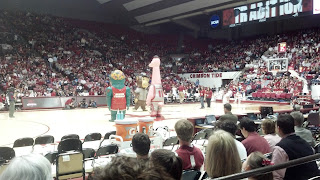 This was our halftime "entertainment."  Inflatable mascots by the names of "Dennis Frogman, Yao Flamingo, and Monkey Mantle" dancing around.  We've ran out of ideas, it's time to just go back to the 4 year olds trying to play basketball.


The second half was a completely different type of game, but with almost the exact same results.  After scorching the nets from downtown in the first half, we did not make a single three pointer in the second half.  Instead, we aggressively attacked the basket and were able to get to the free throw line.  Unfortunately, we shot only 18 of 33 from the charity stripe, but that would be good enough to build the lead back up to 19 before Carolina made another run in the final few minutes that was too little too late for them.

It was very unusual to see a two man crew officiating a Division 1 college game.  It was reported that the third official missed the game due to a family emergency.  Whoever that was, and whatever the emergency was, I hope all is well now.  They generally go to great lengths to get replacement officials in when something like this happens.  As an example, one of the officials for the five overtime Louisville-Notre Dame game last weekend had called a game in Milwaukee earlier that day and drove down to South Bend for the game.  Whatever caused the 3rd official to miss must have been fairly serious and/or came up at the very last minute.

To put into perspective how unusual that is, in Alabama officials may not even START a game with only 2 officials at the high school varsity level.  (I'm not saying it doesn't happen, but when it does, those officials get suspended).  Middle School through Junior Varsity games are usually played with only 2 officials here, but some states do not even use 2 man crews for middle school games.  Guys at the SEC level likely don't call recreation leagues, so it had probably been decades since Joe Lindsay and C.J. Washington worked a two man crew.  Early in the game, they made a few mistakes with their positioning and rotation, but they quickly got on the same page and I think they did a great job.  I do think we benefited by having only two officials, as the most difficult thing to see/call in a 2 man crew is the moving screen in the high post/elbow area.  The reason being, is the trail official is focused on the ball out around the perimeter, while the lead official is watching the matchups in the post play, usually focused in the paint and low post area.  As such, it is no coincidence that Moussa managed to only pick up two fouls.

Trevor Lacey is showing some signs of getting out of his slump, leading all scorers with 17 points and going 2 for 6 from 3 point range.  Retin is giving us a good spark off the bench in the first half, he played 14 minutes and scored 8 points, knocking down a couple of threes.  We had the good Nick Jacobs for most of this game too, as he gave us 10 points and actually pulled down a few offensive rebounds.  Levi came up huge defensively with 4 steals.

Andrew Steele dressed out but did no play.  He is dealing with discomfort in his right ankle from a "stress reaction," and is day to day.  We all know the difference in our record with and without him, so I hope he is ready to go by the time we hit the road for Baton Rouge next weekend.

It was an average crowd, probably close to 9,000, but frankly there was not a lot of energy in the building.  It was fairly quiet most of the night, as I think most people were just hoping we wouldn't relinquish the lead.

Up next, our rivals from the west, the Mi$$i$$ippi $tate bulldogs come to Tuscaloosa for a 7 pm tipoff.  They don't like us, and they will be looking for revenge after we thumped them by 30 or so in Starkville earlier this year.  They are horrible, but as I've said numerous times, we aren't good enough to take a night off against anybody, so let's hope for a good crowd and a good performance to take care of business.
Posted by DJC at 5:11 PM

Levi Randolph had nine rebounds. Retin and Coop are coming on strong. Now we need Pollard to step up to the next level. I hope he gets a lot of PT before the SEC tournament. Keep going guys. One at a time.

I had a problem with Frank Martin fouling down double digits with 30 seconds left, it was tacky, and further showed Martin's classlesness and jerkness that has been on display his entire career. I loved the two in your face alley-oops at the end of the game to show ole Frank who's boss.

The future at point guard looks bright with Retin.
I'm trying not to get hyped up about the NCAA tournament this year because to make it I believe we must either beat Florida or win the SEC tournament and that is a very tall order.
So instead when I watch us play I just look for consistent improvement with everybody. I'm still really looking forward to next year and I hope that Pollard can add at least 15 pounds to his upper body during the offseason.

Im so glad our team doesn't give up as easily as some of the people that post on this blog do. We lose one game and all of the sudden, its all about "next year." No we don't necessarily have to win the SECT or beat Florida to get in the big dance if we go 22-9 and 14-4 in the league, and maybe win one or two games in the SECT, which as a 2 or 3 seed we would have a very good chance to do we will be in the NCAAT, so please support your team and don't give up yet.

I will always support the school that I attended in every sport, but it isn't like we have one bad loss because we have three. Our best win is at home against Kentucky and now without Noel who knows if they will make the tournament. If Kentucky can't get in then Villanova becomes our best win and right now I think most people have them in the first four out. I try and look at our resume from the perspective of an outsider not a fan and right now I don't see much redeeming about it. We need a quality win and there are two teams right now that I believe would give us that which are Mizzou and Florida. Just because you finish second in your conference doesn't mean anything. I believe the Pac-12 only had one team make the tournament last year so that just goes to show you the selection committee isn't afraid to keep a power conference out if they don't deserve the bid.

I agree, our resume is not impressive, but I think we have a much better chance of winning the SEC tournament than people are giving us. We need to hold on to a top 4 seed, preferably stay at 2nd.

Does anybody know anything on Andrew Steele's latest injury? I hope it is nothing serious but it is concerning.

Sore foot/ankle. Grant said he could have played if needed but his status is day to day.