Before I begin let me thank reader Karen for sending the following pics from the UGA game on Tuesday. If the game started at 7 or 8 I would've made it (2hr drive for me). 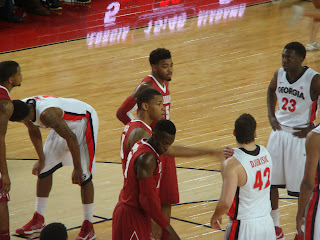 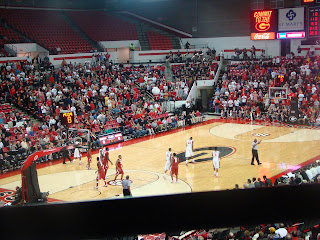 South Carolina comes in 12-12 overall and 2-9 in conference. They got shellacked by LSU in Columbia last night 64-46. The Gamecocks are currently on a 5 game losing streak. I wonder if Frank Martin is regretting leaving KState for this abyss of a job. If he can't turn them around in 4 years I don't think it's possible for South Carolina to ever be good.

I'm not even going to pretend I've watched them play this season. To be honest, it's been tough watching SEC basketball that doesn't include Florida, Ole Miss, or Missouri playing.

The only consistent with South Carolina is Lakeen Jackson who has started every game this season. He's 2nd on the team in boards and assists. Otherwise, Frank Martin makes Anthony Grant's starting lineup look stable. LaShay Page is gone for the year for an 'academic glitch', Bruce Ellington (even though only a Jr seems like he's been there since Eddie Fogler) has struggled since joining the team, and overall the 'Cocks are dropping 59.3PPG in conference play.

An aside- Ellington's claim to fame is catching the winning TD against Michigan in the Outback Bowl in the final seconds of the game.

Michael Carrera  and Brenton Williams are the only ones averaging double digits in scoring with Williams being their best 3pt shooter.

For us, we need to get Lacey out of his shooting funk, tell Grant that it's not illegal to shoot the ball with more than 10 seconds on the shot clock, Releford to drive, and Jacobs/Gueye providing offense/defense (as many have said if we combined them they'd be a good player).

South Carolina is ungood, but we aren't exactly Indiana or Duke either so expect another ugly game that sets basketball back 40 years that we win somewhere along the lines of 54-47.

Game time is 4PM EST (3PM CST) on the SEC Network and watchespn.com. I've been watching a lot of games on the innernets lately... for those that do the same I suggest buying a HDMI cable (if your PC/laptop has that connection) and running it to the TV. It's worlds better than watching on a laptop.

Also- As you can see I have updated the site a little bit both on the mobile and full version. I've had some minor issues with the comment board that is now resolved. For those that are concerned about using their real name in comments (using Facebook, Goggle +, Twitter), Disqus is free to register and you can edit your poster name to whatever you want it to be... and you can upload an avatar. When you log in go to edit settings and you can make changes there. You can use this for other websites as well.

Posted by bobbyjack at 9:53 AM

Hey did any of you by chance see where CBS had us winning the SEC tournament? Could happen, if we go 6-1 down the stretch I think we very well could make it regardless.

DJC: I completely agree. After I read Martin's comments following the
LSU game, my first thought was, "oh crap, they'll probably play out of
their minds on Saturday." Alabama is the more talented team but, due to the
offensive troubles, they can be beat by anyone. Hopefully the increased
movement on offense we've seen in the last two games will result in made
baskets for a change and Alabama can jump out to an early lead. This
Carolina team is fragile and might fade if Bama takes care of business
early and can build a double digit lead. And our guys will actually have
the inside advantage for one of the few times this season so I hope
Jacobs is ready to play. I expect another close game because most games
have been close this season, but I think Alabama pulls away down the
stretch for the win.

I'll have what that guy is drinking although I think he is factoring in UF taking it easy in the championship game.

A few quotes from CFM about his Gamecocks"

“If you take (point guard) Bruce Ellington off our team, you’d probably
have the 12 leading candidates for the starring roles in ‘The Return of
the Living Dead,’ the zombie movie,”

“Same players, same coach, same team. Ever since the Florida game, we’ve
been fighting a losing battle because the desire to play is not there.
I’ve always taken pride to get guys to do what I ask them to do, and
right now, that’s not happening. They didn’t bring me here to create a
bigger problem. They brought me here to fix a problem and I’m not doing a
very good job of that right now."

“If this was the NBA, we’d fine them, we’d take their money, we’d
release them and say, ‘Good luck with ever finding another job.’ It’s
not the NBA. So we’re in education. Somehow, some way, we have to reach
them. It’s embarrassing. I’m just telling you, I’ve been telling our
team here for three weeks that there’s a word that if it’s not in your
vocabulary – whatever it is you choose to do in life – if the word
‘pride’ is not your vocabulary, you’ve got no chance at ever sniffing
success."


Goggle Frank Martin rips team... plenty of good ones there... and I can't blame him.

Bad team, on a losing streak, being called out by their coach...this reminds me way too much of the auburn game. I bet they respond and give us all we can handle. Better bring our A game.

Also, regarding the pics..."Commit to the G"? Really? They are just blatantly stealing from our Blackhawks' "Commit to the Indian" slogan from a couple years back.

I really wish Frank Martin could have waited until after today's game to make those comments, that does worry me, South Carolina always plays us close so I would not be shocked if we had another close game today. RTR

Is it really that far fetched? Hopefully Florida does not take it seriously like UK didn't last year. I still think the SEC tournament is wide open this year.

I get the thinking that South Carolina will play hard but honestly to me they seem like a team that has alot of work ethic and chemistry issues if the coach is calling them out like that so I could see them getting frustrated by our defense early on and packing this one in. I think we snap the cold streak and win big today.

Reminds me of Hankerson... play well... not seen for a couple games. I like Retin's energy and confidence.

Retin has really been a spark for this team, I wonder why he played so little in the first half of the conference schedule?


i can deal with the red background. if it's not too much trouble please up your font size a click or two.


it looked like the team was getting tired and losing focus sat. look good offensively then let usce come back towards the end of a period. how would this game have gone if played in columbia?? who knows. but the offense looked a little better. actually made a couple of alley oops. few missed lay ups. seemed like we shot earlier in the shot clock too. i think that helped things flow a little better.


still, i think a change MUST be made in the off-season. there's just no way alabama should field a team that's had the problems w/ lay ups we have. looked so damned ugly trying to run an alley oop. can't pass the ball down low in a fashion where the receiver could turn and score efficiently.


and grant's got to get his ass on the recruiting trail. i love moose. love his shot blocking. love his effort. but he would NEVER be recruited to a big 10 team. the guy is just not panning out. we've got to recruit a quality big man. (men) grant can talk this crap about only signing one player in this last signing period but if he's not signing because he can't find the right someone, how in the hell did gueye and engstrom get on this team???


and devonta pollard. 5 star? he's not a four star. or, maybe he is and isn't being coached??? ditto gueye??


i've said before, i think we have some talent on this team. they're just not in synch. not playing together. it's as if they're practiced individually then thrown on the court cold turkey.


i think there are serious coaching issues with grant we shouldn't be having in year four. at one point during the game we made a great defensive play and stole the ball, fast break down court and turn it over. and it just wasn't the fact we turned it back over, we looked HORRIBLE doing it. we get down there and have no IDEA where to be or what to do. (and please don't embarrass yourself and say carolina's defense had something to do with that)


but you wouldn't know it by watching this year. we should look better than this.


yes, we're in sole possession of second place. kidnap half of florida's team for the rest of the season and we might win the conference. might.


you guys know how i feel. it bothers me that, here we are again, languishing when we could make a change to someone with a track record of positive change, someone who we could get, (someone who WILL BE GOT) goes elsewhere.


but we'll stay with grant.


anyone notice all the empty seats in the lower sections??

Done. Now the old-timers can see this (g).

I think DJC said it best recently when he said there's no sense in harping on our O when the SEC sucks. Right now we are the 2nd best of the bad... if you look at it that way we are kinda overachieving. Still, the overall view is we have a 25% chance of making the NCAAT. I'm gonna hold off on my overall view of the program until the off-season.

Those lower seats being empty... thank Tide Totals for that.

There was entire rows of empty seats near the top. I'm not sure why, but it appears that some of our fans are not aware of the fact that we are all alone in second in the SEC. Come support the team RTR.