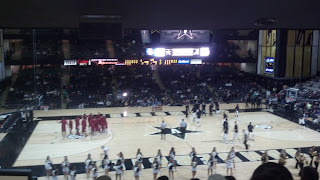 The first 3 possessions of the game featured 2 Alabama turnovers on travelling calls, and a Vandy 3 pointer.  For most of the game, it felt like Groundhog's day, the same thing we've seen over and over for the last 20 years in Memorial gym, unfavorable calls from the officials, a barrage of 3's from the home team, and we leave town with an L.  This team refused to follow the script for the last 5 minutes, and now the gorilla known as Memorial gym has been expelled from the back of the Crimson Tide basketball program.

Vandy  is a young team that has struggled this year.  We actually matched up with them better than most teams because they are susceptible to back court pressure and do not have a dominant big man.  We pressed nearly the entire game.  Vandy shot over 70% from 3 point range in the first half to build an 8 point halftime lead.  While most of those shots were wide open, for the most part they were not the result of poor defense.  When a team breaks a 2-2-1 press, they will often have an open look from 3 point range, but most teams won't take that shot with 25 seconds or so left on the shot clock and nobody under the goal to rebound, but Vandy playing at home is a different animal.

They also hurt us by moving their smaller center out on the perimeter, where Gueye is not particularly effective on defense, and of course Nick Jacobs isn't effective anywhere on defense.  This opened up some space under the basket for them.

We briefly countered with a very unusual lineup.  At one point we had Lacey, Retin, Levi, Cooper, and Devonta on the court.  To say that Pollard was playing out of position would be an understatement.  He did okay defensively since he wasn't matched up against a true center, but watching him try to play with his back to the basket in the low post was brutal.

In the second half, our press was much  more effective and we were able to get some points off of turnovers and get back into the game.  It seemed like every time we would get to within one possession, Vandy would knock down another 3 or we would get called for some ticky-tack foul.  With 7 minutes left, Vandy had stretched their lead back to 11.  At that point, they had called one foul on the Dores in the second half, and 5 total for the game, while we were already in the bonus.  There were several out of bounds calls that went against us that looked to be bad calls from my vantage point.  It certainly seemed that we were facing insurmountable odds.  To make matters worse, Releford would leave the game with an eye injury.

The team didn't quit and never lost confidence.  Andrew Steele once again demonstrated great leadership in keeping everyone focused, but he also set the example with his play.  He was aggressive at both ends of the court and was able to contribute 13 points.  Rodney Cooper bounced back and had a great game after struggling some against Arkansas.  Levi's defense was huge down the stretch.  Of course, you cannot say enough good things about Trevor Lacey's play in this game.  Not just making the game winning shot, but stepping up when Releford got injured and making several improbable shots throughout the game to keep us in it.

After falling behind 11 with 7 minutes left, we outscored the Dores 18-3 to close out the game.  I felt that if we could ever get the game tied or take the lead, the young Commodores might begin playing tight.  At the same time, there was a part of me that expected either a fluke shot, bad call, or some combination thereof to beat us even after we got the lead.

Coach Grant should also get a lot of credit for the game winning shot.  I made the comment out of the timeout that Stallings is a much better X's and O's coach, so I thought we would be at a disadvantage in that situation.  Coach Grant drew up the elevator door screen, which Cooper and Jacobs executed to perfection.   I have not seen us run that play this year, and I don't think Vandy saw it coming.  Lacey cut from the basket to the top of the key, going between Jacobs and Cooper at the free throw line.  Lacey had a step on his defender, and Cooper and Jacobs came together to set the screen.  The defenders on Jacobs and Cooper did not recognize it in time to switch, giving Lacey an open look from the top of the key, which he knocked down.  We played great defense forcing 2 missed three point attempts at the other end, and made just enough free throws to put it away.

We got to congratulate Trevor Lacey after the game.  He was extremely cordial and polite, even taking the time to pose for a picture with my friend's son. 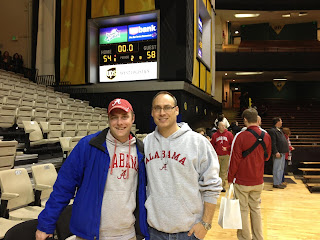 A friend of mine and myself after the game.  He's lived in Nashville for 20 years, and finally got a win.

I would say Memorial Gym is a piece of shit, but that would be insulting to feces of all kinds.  You have to navigate a number of narrow hallways with twists and turns to get from one side of the arena to the other.    Our seats were in the second tier, where the seats are wooden benches.  As you can see from the first pic, I could only see the bottom 20% of the TV screen.  Also, I do not think the NCAA should allow their goofy court configuration.  Unless the rules are different from high school, the coach's box is supposed to be from the 28 foot line, extending 14 feet toward the baseline.  I don't understand how Vandy is allowed to put the benches wherever the hell they please and arbitrarily mark a coach's box on the baseline.

That was probably the fewest Vandy fans I have seen there for a Bama-VU game.  My understanding is that dump seats approximately 15,000.  It's hard to give a crowd estimate when I can only see about a third of the seats from where I was sitting, but based on what I could see, I would say there was probably only 7,000 or so there.  Of that 7,000, close to 10% were Bama fans.  The "De-Fense" and "Roll Tide" chants could be heard clearly throughout late in the game.  Our Nashville alumni base and North Alabama fans really did their part.  Most of the Vandy fans were nice enough.  Several congratulated us after the game, although one snobby bitch did approach me at the end of the game and inform me that I needed to see a therapist.  I just smiled, told her "good game" and went back to my "Roll Tide" chant.  In fairness, I was probably a little more excited than most visiting fans are when beating an 8-11 Vandy team, for obvious reasons.  I was surprised most Dores fans I spoke to had no idea that they possessed such an impressive home winning streak against us.

Up next, we go to auburn Wednesday night for a 7pm tipoff that will be televised on the SEC Network.  It's also National Signing Day for football, so expect an extraordinarily hostile environment.  We will need to bring our A-game to keep Coach Grant's perfect record in auburn Arena in tact.

agree completely on your commentary concerning that gym.

i can deal with fan participation and it's affects on a visiting team. but that a venue can have the affect on play that gym does is not fair. we have a hard enough time with our free throw percentage without having to deal with that background depth perception issue.

(growing up one of the-many-reasons i hated the boston celtics was the unfair advantage the dead spots in the old parquet floor at the old boston garden gave the home team. those dead spots caused many a turnover for a visiting player who, in the heat of battle, might forget about them)

i cursed the team at some of the horrid free throws before reminding myself of these issues.

the sec should enforce some standard for a conference basketball arena.

vanderbilt is a prime example of the weakness of the conference. the sec is just terrible. alabama is just a street fight team and when they win it's not going to be a thing of beauty.

as i watched the michigan/indiana game, i texted a friend and told him watching that game after watching sec ball is like sipping perrier after slurping puddle water.

we're not butler. not gonzaga. and at some point we have to come to grip with the fact it's lack of coaching. fact is, across the board, the big ten has better coaching than the sec. the best players gravitate to that and it shows it the final product.

but for now, i know we were all sick and damn tired of losing to vandy. regardless of the state of their team, this win was big for us. everybody was focused on our abysmal record at memorial but frankly, it hasn't been good at home either. we've got pounded at home when we had the better team!

this team could have easily folded and reverted back to form. they didn't.

and maybe this will give us some confidence for the remainder of the schedule.

short of winning the sec tourney, i still don't have much confidence in us making the big dance. the spin currently coming out of tuscaloosa is the bad patch we had in december is due to the absence of andrew steele while injured.

my memory isn't that good but i don't recall a tournament exception for injury.

regardless, it was a great weekend. bama won. auburn and that damnable mark gottfried lost too.

A good future is waiting for this team. Good luck!

Gottfried has lost a few lately. It's like clockwork, put some expectations on that guy and watch the inevitable underachievement. Sucks for N.C. State fans, that's a Final Four caliber roster they got up there.